Today we begin year two of four of the Narrative Lectionary, journeying once again through the great stories of the Bible, with our reading from the second chapter of Genesis. Last year we began with the story of the Flood and so you might be wondering why not just start at the beginning, with chapter one. Well, there’s a reason for that. Each year consists of readings from a different Gospel from the end of Advent through Easter, last year we read through Matthew, this year will be Mark, then Luke, then John.

And so, each year the Hebrew scripture readings in the Fall are chosen based on which ones match best with the Gospel that is going to be read that year. Why, because for Christians, particularly us Lutheran variety, see the Gospels as core to our Biblical understanding, they are the heart of the entire Biblical narrative. The Gospels are the lens by which we love the Hebrew Scriptures.

Today’s reading from Genesis may not be as familiar to you, especially because it is not found in the Revised Common Lectionary, that’s the other collection of readings that many churches have used, including Bethlehem before me, for over a quarter century now. Not only that but when you think of the Creation story, most people think of the first chapter of Genesis, the one that begins with “In the beginning.” But this story that we have before us today is a completely different story all together. It’s not a more detailed look at the first creation story, the way many Biblical literalists would have you believe. No, this is a different narrative of how creation was created.

Just take a look at a few of the details and you’ll see. For instance, rather than a blank canvas with nothing but a void and darkness, this story begins with the earth and heavens already in place. Rather than animals being created before humans, a male human is created. Rather than both the male and female humans being created together, the female is created last, after the animals. Those are just a few of the glaring differences in these two stories. What fascinates me, is that our faith ancestors were ok with that They were ok with there being two separate and contradictory creation stories in the same Bible, and there’s no reason we can’t be ok with that too. If you want to hear more about that, this is one of the many topics we will talk about at Faith & Froth this month!

But let’s dig into this story further. Like the first creation story, this one is rich with vivid imagery, giving us lots of different things to chew on and process. One of things that really stood out to me this time, even though I’ve read this story countless times, is how almost perfect creation is portrayed. You heard that right, almost perfect. When we think of those first days of creation we often think of the Earth being a veritable paradise, where no one and no thing is left wanting for anything.

Many of us have this idea that it was the closest thing to heaven that the Earth will ever see until we get to the real thing. But if you look closely, that’s not at all how this author describes those first days of creation. By the way, not only was this written by a different author than the first creation story, it was written much earlier. Scholars believe that this one was written during King David’s reign, while the first one was written much later during the Exile. But I digress. 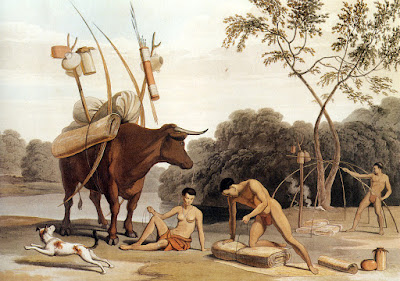 Let’s take a look at just how imperfect this perfect creation was. First, the author mentions that there was no vegetation. Why? Because there was no one to farm the land. Whoa! Hold on a sec! God expected us to work…in paradise!? Who thought that was a good idea? Had I been that first human I would have been asking to see the manager immediately! However, that’s the way this author saw the world. Yet, another difference from that first creation story. So, the land is left wanting, without a farmer. Next, is this reference to the tree of knowledge of good and evil. If creation started out as a perfect creation, why would this tree even need to exist? Next, the author mentions that there was no rain, so creation begins in a drought.

Carl Jung called it the “togetherness principle.” I like that description the best, because that was the missing ingredient in this creation story. Everything was present but separate, rather than working together to care for each other’s needs. It was almost as if there was a switch that God just hadn’t yet flipped on. And what was that switch? A woman! God made a woman and then all was right in the world. The end. Amen! I wish it was that simple! However, it sure does read like once the female human was created, everything just started to work together, Synchronicity had been found, the Togetherness Principle began to operate.

Now, I’m not saying that women are the answer to everything, although that was the case in my life. But the point here is, creation is not operating at full efficiency, if we are not working together to care for each other’s needs. And who do I mean when I say we? I mean every one and every thing. From people of different faiths, colors, cultures, and places, to animals and plants, and even the air and the water and the earth.

Every thing and every one has been created to work with each other, to care for each other, to dance with one another—all in one great big synchronous life together. Creation was designed to need all it’s different parts needing each other to work together, in order to reach the perfection that it was created to be. It was created perfectly imperfect, almost paradise.

I invite you to ponder the many ways that our world is out of sync, and how we can help to bring that synchronicity, that togetherness principle back into reality, and as such, becoming a coworker with God in this continuing saga of creation. We will be doing just that today at two o’clock at our meal packaging event. Feeding the hungry is precisely this togetherness principle put into action. I’ll leave you to think of other ways to do so. Maybe we’ll even do it together someday. May God bless our work together, as we spread a bit of paradise wherever and whenever we can. Thanks be to God. Amen.