This is our third and final week in our series on Sabbath. When I first saw that this topic was coming I thought to myself, “How in the world am I going to talk about Sabbath for three weeks?” Well, I was proved wrong! Now, I’m feeling like I didn’t get a chance to say enough! I had no idea there were going to be so many different ways to apply the principle of Sabbath, of ceasing, of ceasing from work, and all that it might lead to.

During week one, we talked about how Sabbath can help us to redefine who we are, and how it can remind us that we are God’s children. Week two taught us that as God’s children, we are designed to enjoy God’s creation, to enjoy life’s simple pleasures, especially as it helps us to keep from working, or even thinking about work! The first two weeks were about God and us, and now we turn our attention to what Sabbath can teach us about how we relate to others. And it’s not easy to hear.

If last week’s lesson sounded a bit over-indulgent to you, this week’s lesson is anything but! It’s quite challenging really, especially for us U.S. Americans, who idealize, romanticize might be a better description, things like independence, capitalism, and a free market, which, of course, is just a form of Darwin’s “survival of the fittest.” Today’s lesson from Deuteronomy flies in the face of all of that and more. It’s so counter-cultural you’d think Jesus wrote this himself! But this was long before Jesus was a twinkle in God’s eye.

The context for today’s reading is the same as it was two weeks ago. God’s people had been freed from slavery in Egypt, had been given the Ten Commandments, of which honoring the Sabbath and keeping it holy is one of them, and were then in the wilderness waiting to enter the homeland that had been promised to them.

While they’re waiting, they were given a whole lot more than just ten commandments. Remember, God was helping them to figure out who they were again, apart from slavery. First and foremost, God was helping them to remember that they were children of God. And so, they were given dozens upon dozens of laws and regulations as they relearned how to behave as children of God. And God needed them to figure this out before they entered their new homeland, otherwise, it would have been doomed to fail.

And one of those laws was the one that we have before us today—the Sabbath Year. Every seven years they were instructed to forgive all debts. How un-American is that! To be fair, this law was just as counter-cultural for them then as it would be for us now. This is just not the way humans work. So much so in fact, that there is very little historical evidence that this law was every taken very seriously.

I don’t know if you picked up on this but I love the sarcastic remark that God gives them when giving this law. God says, but “of course there won’t be any poor persons among you because God will bless you in the land that your God is giving you to possess as an inheritance, but only if you carefully obey your God’s voice, by carefully doing every bit of this commandment that I’m giving you right now.” In the same breath, God then says, however “if there are some poor persons among you…”

God knew they weren’t going to be able to do this from the moment the law was given! Oh, they tried in various ways to honor this law but their human nature usually got the best of them. Which is why Jesus, centuries later, would echo this passage when he said, “The poor will always be with you.” Not just because they will be, but because we are still, to this day, thousands of years after this law of the Sabbath Year was given, still learning how to live as children of God.

Will we ever learn? Maybe. Maybe not. Probably not. If not, should we just give up and forget this weird law? I mean, canceling debts, how impractical is that? Surely this doesn’t apply to us, right? Well, I’m not so sure we should ignore this. I think there is a deeper wisdom here that is very applicable to us, especially if we don’t interpret this so literally, or so monetarily. Would a lot of people benefit if we actually canceled debts every seven years?

You better believe it! That would mean that I might live longer than my school debt! And then be able to use that money to pay for, oh, I don’t know, my children’s education so they wouldn’t have to go into debt! But I’m not bitter. If we’re realistic about our humanity, or lack thereof, we know that we just don’t have it in us to literally cancel all debts every seven years, but is there a way we honor this type of Sabbath?

The last two weeks we have focused more on how to honor the Sabbath for ourselves and God. We’ve focused on how and why to take a Sabbath for ourselves. Now God turns our attention on how to give a Sabbath to others. And remember, the word Sabbath doesn’t mean “rest” in Hebrew, it means to cease. So, how can we give a “cease” to others? What can we “stop” for the benefit of others?

How can we give a Sabbath to someone else to better their lives, and particularly, the things that others owe us, or, and here’s the kicker, the things that we think they owe us. This might take some imagination but bear with me. Is there a connection between God’s call for us to honor the Sabbath and things like: sexism, racism, homophobia, xenophobia, ageism, transphobia, ableism, or any other kind of ism that you can think of?

And just so we’re clear, when I use the term Sabbath, I’m not talking about a day of the week, or a year, think bigger than that. I’m talking about God’s call to cease, to stop, and in the case of our reading for today, to cease for the benefit of another. Let’s call it The Great Sabbath, or better yet, The Great Ceasing. So what might that have to do with all those isms I mentioned? Well, let’s take sexism as an example.

For thousands of years in most countries of the world, men have assumed that women owe them a certain amount of respect, of a status above them in society, submissiveness, even to the extent of their livelihood as property. These things are what men have traditionally thought women owed them. That “debt” needs canceled, and not just for a day, or a year, but forever. Not only because it’s wrong, but because it wasn’t a debt that should have ever been owed in the first place! 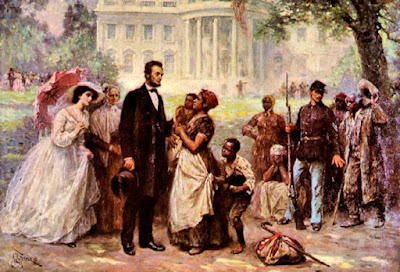 Here’s another one, the same concept can be applied to racism. For as long as European countries have been colonizing the rest of the world, it quickly became common practice for white people to think that people of color somehow owed them—owed them their allegiance, servitude, livelihood, elevated status, and respect. That “debt” needs canceled, and not just for a day, or a year, but forever. And if you think these examples are debts that have already been canceled, I’d love to give you some reading recommendations, all you have to do is ask me.

Here’s the bottom line, I have a feeling that if you name an ism, we would be able to apply this concept of Sabbath, of ceasing for the betterment of others to it. A concept that began all the way back at the beginning of creation, because God knew back then, that we would not be able to figure this out on our own—and so has commanded us to take a Sabbath, and to give a Sabbath. That is the way that the world is supposed to work. I don’t think it’s too late to keep trying.

And I don’t think it only concerns the isms that I mentioned. We can practice The Great Ceasing in small ways too. We all know we have behaviors that hurt those around us rather than bring life, oftentimes those closest and dearest to us. Maybe those are what God is calling you to cease. I invite you to think of ways in which you can practice The Great Ceasing for the benefit of others. Be bold, be creative, be courageous, it’s what you were made for. Thanks be to God. Amen.