I warned you these tough parables were coming! Whew! This one’s a doozy isn’t it? Did Jesus wake up on the wrong side of the bed that day? Was he fighting a cold or something? Did he need to up his fiber intake? I don’t know but I’m sure many of you listened to this and thought, “Well that doesn’t sound like the Jesus I know!” Well it is! I didn’t make that up! It’s right out of Matthew’s Gospel! And though I joke about Jesus just being in a bad mood that day, I do think there is some truth to that as well. Let me explain.

Like last week, we skipped a chapter between Sunday readings. Last week we read from chapter 20 and today we read from chapter 22. And since scripture should never be read out of context, we have to ask what was in chapter 21! That chapter starts with Jesus’ final entry into Jerusalem riding on a donkey. Which means that, even though we are in the middle of Lent, the rest of our readings in Matthew between now and Easter will all occur during Jesus’ last week on earth, they’ll all occur during the events of Holy Week.

So, for Jesus, his end is now in sight—tensions are tight, stress levels are high, emotions are running deep. And where does Jesus go as he’s riding on his donkey like royalty into Jerusalem with the crowds shouting “Praise God!” and waving palm branches in the air? He rides straight to the temple! And what does he do there? He throws out the money changers! He knocks over their tables and money and animals that they were selling! He throws a tantrum! And before he leaves he ends with some name-calling by calling them a bunch of crooks! Talk about waking up on the wrong side of bed!

But the chapter doesn’t end there, nor does his bad mood. Early Monday morning Jesus wakes up hungry, wants some breakfast, so he goes out to pick some figs off a tree only the tree didn’t have any. What does he do? He curses it! No, he doesn’t curse at it. He places a curse on it so that it’ll never bear fruit again! The disciples were probably like, “Oh, so it’s gonna be one of those kinds of days is it? Ok! Everybody stay out of Jesus way then shall we?”

Then Jesus returns to the temple and the chief priests and elders start in on him by questioning his authority. His disciples were probably thinking, well this is going to end well, not in the mood that he’s been in! So Jesus answers their question with a question and they can’t answer his question so he says, “Well, then I’m not going to answer yours!” I mean, the sass coming out of Jesus that day is off the charts!

Then Jesus starts telling them parables that I’m sure no one was asking for but no one was going to dare say anything. He tells a parable about a disobedient son, then he tells one about violent murderous farmers! I kid you not, you can’t make this stuff up! Then we finally get to the parable that we have before us today, the parable of the wedding party. So, if you were one of those thinking, that doesn’t sound like the Jesus I know, now you know, there was good reason for that.

So, to recap, a few things to keep in mind as we delve into these Holy Week readings between now and Easter: one, Jesus was in a bad mood and he was justified for being in one; two, his justification comes from the fact that this is the last week of his life. Think of Holy Week as Jesus’ last week on death row; and three, as such, tensions, emotions, stress, are at an all-time high for Jesus. But maybe even more important than all of those things, this week’s reading has one more thing to keep in mind.

And it’s who Jesus is talking to. He’s not on a mountainside talking to his thousands of followers, he’s in the temple, and he’s talking to the Jewish leadership. The Jewish leadership that will, in just a few short days, be handing him over to be executed. That’s who Jesus is talking to in this hard-hitting, cutthroat parable. Knowing who he was talking to is not insignificant! Jesus was human, and we humans talk to different people in different ways, right? We all do it, and so did Jesus. And to be frank, in the spirit of Jesus’ mood, to assume that every word out of Jesus’ mouth is directed at us, is a bit on the self-centered side.

However, by no means am I saying we should dismiss this parable. There’s a lot of good stuff to be harvested from it. But I’m going to give you what is probably a different way for you to look at it than you have in the past. One of our hang-ups with this parable is that it paints God in a very different light than we are used to. In this story, the ruler is vengeful, violent, and easily insulted. But, who said the ruler in this story is God? Matthew didn’t say that! Jesus didn’t say that! That’s an assumption that readers of this story have made but I’m not convinced that this is the wisest interpretation. And the big red flag here is the fact that the ruler doesn’t behave like the God we have come to know. So, here’s an alternative for those of you who struggle with this parable like I do. What if, God is in this story, but not as the ruler? 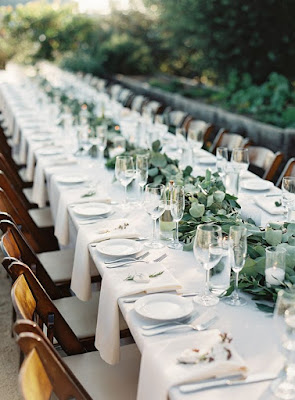 What if God is the feast at the wedding party? And everything that is going on around that feast is all the chaos that we humans bring—the fighting that we do, the killing that we do, the carelessness, the apathy, the exclusiveness, that we bring around the feast. Think about it, God is there for us to feast with and to feast on, whenever we want. No one makes themselves more accessible than God does right? What gets in the way is all the foolish chaos that we bring around God, that not only gets in our way, but worse than that, gets in the way of others on their way to the feast that we know as God. It’s bad enough when we get in our own way, but even worse when our actions or inaction, get in other people’s way of experiencing the lavish feast, the amazing party, the celebration, that is God.

And we get in people’s way all the time, don’t we? And we do that in both overt and subtle ways. By the way we behave sometimes, the things we say without thinking, the opportunities to be kind that we allow to pass without acting on them. Some churches do this in very direct ways like making it clear that certain groups of people are not fully welcome in their churches. But I think the real threat, is in the more subtle ways that we get in people’s way of the feast.

Maybe it’s in the assumptions that we make about people based on their appearance and the questions that we ask them based on those assumptions. Maybe it’s in our inability to recognize that people from different cultures behave differently but we assume they’re being inappropriate when they really aren’t. I see that across generations as well. One generation will see the behavior or language of another generation and deem it as inappropriate or even insulting but it’s really not, not for their generation anyway. But the judgment that ensues creates barriers as well as an unwelcome atmosphere.

I won’t get into specifics of the different ways that we do this, I’ll let you come up with your own examples. The bottom line here is, God is a feast available to anyone who wants it, those that we would deem as good and those who we would judge as bad. Our job is not to differentiate between the two. Our job is to get out of the way, or better yet, clear the way, clear the way for all to get to the feast, to the party, to the celebration, that is our God. Amen.