The Parable of the Darnel

First, a quick primer on parables. Say that five times fast! I’m pretty sure I’ve talked about parables before but it’s worth repeating because Jesus used them a lot. And they are probably the most misunderstood and misused of all of Jesus’ teachings. We have quite a few of Jesus’ parables coming our way between now and Easter and so there a few things we need to keep in mind about them, especially since, as I’ve been warning you over the past few weeks, some of them contain some really tough teachings from Jesus.

So, the first thing we need to keep in mind is that we don’t want to take them too literally. Parables are often stories, stories that Jesus told in order to make a point of some kind. But we have a tendency to take them too far. Because like any analogy and metaphor, it doesn’t take too long before it begins to break down and become confusing and lead you down an erroneous path. For example, Jesus once told a story about a lost sheep. What else do we know about sheep? Well, they don’t necessarily have the reputation of being the smartest animal in the barnyard right? So, is Jesus calling his followers dumb? No, that would be taking the metaphor too far.

The whole point of a parable is to help us, not to confuse us. So another thing we want to keep in mind when dealing with parables is to not get bogged down in the details. Using that same example of the parable of the Lost Sheep, Jesus says that the shepherd left the rest of the sheep to search for the lost one. So, is Jesus saying that he will abandon us to go search for one person? No, that would be us getting lost in the details. Lastly, be flexible with parables, and don’t take everything at face value. Don’t be afraid to go deeper.

Parables tend to have an overall theme or lesson that Jesus was trying to get across but that doesn’t mean it can’t be applied in various ways. For instance, the overall theme of the parable of the lost sheep is God’s faithfulness. But, using that parable, we can apply it in many ways, such as: God never gives up on anyone, or no one is irredeemable, or God searches, we are found, not the other way around, or, before you give up on someone, remember, God has not. There’s really an endless supply of applications from this one parable, but the main point remains.

Ok, so with that quick primer on parables, let’s take a look at the one we have before us today—the parable of the weeds—weeds, plural, this was Galilee not California. And in this parable, Jesus dives into the world of agriculture, which he did quite often because he was great at knowing his audience. And so, we too, have to dive into the world of agriculture for just a minute in order to understand this parable the way that his original hearers did. So, everybody put your farmer hat on and let’s do some farming.

The weeds that Jesus was referring to weren’t just any old weeds, but a specific kind called darnel. Raise your hand if you know what darnel is. Before seminary, I had never heard of it. It is an invasive species of plant with a few unique characteristics. One, it is virtually identical to wheat. You almost can’t tell the difference between the two until you open it up only to discover that darnel has black grains instead of brown grains like wheat. Two, it’s roots are almost vine-like in that they will wrap around and intertwine with roots of other plants next to it. And three, it’s poisonous, and eating it can be fatal.

Ok, you can take your farmer hats off now. So with all of that in mind, Jesus tells this story of a landowner who plants good seed, good wheat, in a field. Only to find out that an enemy has planted darnel in the same field! And as soon as the crowd hears it’s darnel, they all know what he’s talking about, they all could picture in their mind that treacherous darnel. I bet there were people in the crowd turning to one another saying things like, “That damn darnel, I lost a whole field last season to that stuff! My master lost two!” It would be like if Jesus told you a parable today about the Sacramento traffic. Even if you don’t live or work in Sacramento, we all know about the traffic there and many of us would let out a grunt of disgust at the mere mention of it! Like darnel for them, it would be a reference that most of us would just get.

So after they discover the darnel growing with the wheat, the question is, what do they do about it? The workers suggest they pull them out, but the landowner says no. Doing so would only damage the wheat. So the landowner tells them to wait until harvesttime and they’ll deal with the darnel then…with fire, but we’ll get to that later. Now, it’s been super easy for us to read this parable and say it’s about evil people getting their due and going to hell at the end of time.

And if that’s as far as you want to go with it and you’re comfortable with that, ok. Clearly, you can make a good case for that. I just get the feeling that Jesus wants us to go deeper than that. That just seems too easy for one, and too self-serving for another. Because let’s be clear, that kind of interpretation feeds right into our human need for fairness, justice, or as it’s really known, vengeance and wanting to see others get their comeuppance.

Is that really what Jesus is getting at here? Again, what if we go a little deeper than that? What if it’s not that simple, not that cut and dry, black and white, or so obvious? I don’t think it’s a coincidence that the weeds in question here look exactly like the wheat! Virtually identical! I don’t think it’s just a practical farming practice that makes the landowner say to leave them alone and let them grow together! I don’t think it’s a coincidence that darnel has roots that strangle and is poisonous! So here’s an alternative path to take that many scholars have suggested. What if, the wheat and darnel, are not referring to two different groups of people, but are two different aspects of ourselves, two different aspects of each individual? 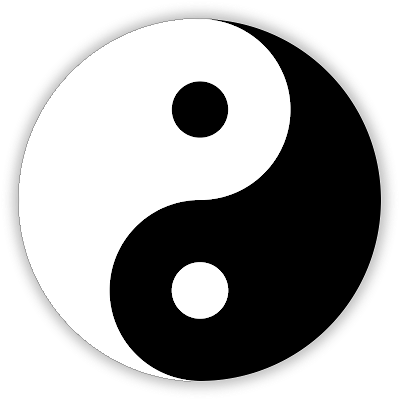 Now, we might scoff at that and think, “That sounds like some kind of Eastern philosophy. There’s no way they could have been thinking that deep!” Why not? Have you ever read the Gospel of John? These biblical authors were deep thinkers! Not mention Jesus, the ruler of the cosmos! If you think about it, it’s kind of arrogant of us to think that we are somehow better thinkers than they were. And, we haven’t really evolved as much as we like to think we have over the last two thousand years! Just read the news for five minutes for proof of that! Our technology may have evolved, but we as a species, not so much, but I digress.

In the Lutheran tradition, we actually have a theology surrounding this concept I’m referring to. Luther called it “simul justus et peccator,” which literally translates, “at once, justified and transgressor,” which we have come to know as “simultaneously saint and sinner.” After reading the Bible, Luther believed that we are, at the same time, both saints and sinners. Saint meaning, beloved by God, not what we usually think of when we think of the word saint, and sinner meaning, that even though we are beloved by God, we will still continue to sin, to make bad choices, to treat people how we would not want to be treated. This concept is found through scripture, Paul wrote extensively on it, and just about every character in the Hebrew scriptures showed us what it looks like, as we discovered this past Fall!

And I believe it is what Jesus was getting at in this parable of the darnel. And I find comfort in believing that Jesus recognized that in us. Being human like us, Jesus knew our struggle. Jesus knew that most of the time we really want to be good human beings, we really do want to always make good choices, we really do want to always be kind, to always love and be loved. And Jesus knew that we lament over the fact that we don’t, that we can’t, that it just isn’t in our nature. No matter how hard we try.

In this parable of the darnel, I see Jesus looking at us and saying, “I see you. I see you. I see who you really are,” and not in condemnation or accusation, but with eyes of compassion. I hear Jesus saying, “I see your struggle, because I shared in your struggle. And someday, not today, but someday, all that you would like to leave behind, your inclination to make bad choices, your inclination to treat others unfairly, your inclination to sin, will be burned away, and gone for good. Until then,” says Jesus, “I’ll be right here, by your side, in the struggle, my precious saint and sinner.” Thanks be to God. Amen.