Since last week’s story of King Solomon and the two women, to today’s story of the healing of Naaman, God’s people have had some tumultuous times. To be fair, there were some high points too. Solomon builds the first temple for the worship of God in Jerusalem. It was a marvel of riches and architecture. He had an interesting encounter with the Queen of Sheba in his pursuit of international relations, but that’s about where the highlights of his reign end. He had many wives and many concubines. However, his greatest of sins was that he eventually turned away from God and began worshipping other Gods.

By the time of his death, the kingdom just couldn’t stay together and it split in two, a Northern and a Southern kingdom, Israel and Judah, each with their own king. They go through many kings, and along the way God sends them prophets, to help guide them and/or correct their misbehavior. Although, as one of my seminary professors put it, once a prophet was called onto the scene, it was usually already too late. These prophet’s stories and messages will be the focal point of our readings from now through Advent, before we finally get to our Gospel readings.

Today’s story from the book of 2 Kings comes from this time of God’s people where they find themselves in the midst of these many kings, one after another. This particular story comes from the Northern kingdom of Israel. It’s an interesting little tale, the significance of might be easy to overlook. So, the prophet Elisha, not to be confused with his predecessor Elijah, hears about a neighboring king’s army general, Naaman, who is in need of healing.

But how that finally gets to Elisha is quite interesting. Now keep in mind, all these nations are in constant friction, wars and battles and raiding parties are constantly breaking out. And so, a young Jewish girl finds herself captured in one of these skirmishes, and is sold as a slave into the house of this powerful army general, Naaman. She hears of her master’s ailment, and what does she do, she immediately thinks of a prophet in her homeland that can heal her.

She does not think, “Oh good, maybe this will kill him and I can get free!” She does not think, “I’m just going to keep my mouth shut because drawing any attention to myself might cause me harm.” She does not think, “It’s not my place as a slave to think I know better than my captors.” To be fair, she may have had all those thoughts but did she act on them? No. She goes out on a limb, at personal risk to herself, and speaks up, for the benefit of her slave master.

Now, we could assume she did this hoping to get a reward, but those thoughts come from our privilege of having never spent a night in captivity, let alone slavery. So why did she do this? The simple answer is that she was practicing the tenets of her faith—lessons like the golden rule; like caring for the less fortunate, like loving your enemies. She did not see her captor, her slave master, no, she saw a person in need, and she knew how to help, and so she did.

The next stop for that message was Naaman’s wife, because the slave girl couldn’t go directly to Naaman of course. And again, I wonder what the possible implications might have been for his wife to bring this idea to him. Though she had more freedom, as she was not a slave, she was a woman, and in that day and age that meant that she didn’t have much of a voice, not to mention she was thought of as the property of her husband. But like the young slave girl who worked in her home, that did not stop her from taking the risk, from taking a leap of faith, and speaking up for the benefit of her husband. And maybe her faith ancestors taught her that too, though of a different religion. And so she shares this message with her husband.

The next stop for this message of healing is to the king himself. And if you think there was no risk to Naaman here, think again. He has to go to his king and ask him if he can go to another king, an opposing king, for help. Think about what’s being said between the lines here: You O king are not powerful enough to help me. Our gods are not faithful enough. Our religious leaders are not capable enough. So, can I go and ask your rival on the other side of the border for help? His king could have easily drawn his sword and killed him for treason were he stood and no one would have batted an eye. But instead, the king simply says, Sure, I’ll even write a letter for you. And so this message of healing moves on to the next person. The king of Israel.

Only this time, the message comes into the hands of an unwilling recipient. The king of Israel is not too happy to get this message. He immediately assumes that this is some kind of game that his rival is playing, that this is some kind of trick, or just trying to get a reaction out of him! Why, well, because this king had trouble thinking of others needs before his own. It was all about him. Isn’t it odd that most of the people from another religion in this story were the ones acting more merciful than this king?

Now, the message could have died right then and there with Israel’s king, ending in war between these two nations. But somehow, it does not. The prophet Elisha hears about it, and sets the king straight. He sees this as not only a teachable moment but as an evangelistic moment as well. How else are people going to know about our merciful God if we don’t show mercy? And so, after Elisha calms the king down, they invite Naaman to Elisha’s house.

Now this could be a trap but Naaman is probably desperate at this point, so he goes to Elisha’s house, in search of healing. And then he gets another surprise! Elisha doesn’t even come out and greet him when he gets there! No hello, no howdoyado; Elisha sends his messenger to give him instructions. And the instructions are simple, go wash in the Jordan River seven times. That’s it! Naaman takes issue with this. Not just because he feels like he’s being snubbed by this supposedly all-powerful healer, but because if washing in a river is all he had to do then why couldn’t he have done that at home! 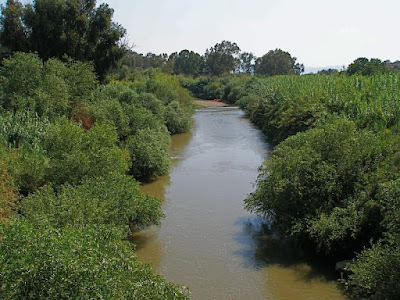 And here’s another detail, the Jordan River, as one scholar put it, is more of a glorified creek!—as you can see here. So, not only do these instructions seem ridiculous, but they’re also a bit insulting. However, the slaves that Naaman had brought with him, calm him down, and in their own divine wisdom, convince him to follow the instructions given to him. And so he does, and finally he is healed. That message of healing that started all the way back with that young Jewish slave girl, finally did its work.

So, from all of that, this is what really stood out to me. That message of healing, had to pass through many hands. It had many opportunities to fail along the way. But it did not. It succeeded, thanks to many unlikely hands, from some very surprising places: the young Jewish slave girl, the wife of Naaman, Naaman himself, two rival kings, and Naaman’s slaves.

All of these people had to carry that message of healing in some form, whether they knew it or not, in order for Naaman to be healed, sometimes at great risk, none of whom are likely candidates to help out in a healing, and yet they did. All Saints Sunday is an opportunity for us to not only remember loved ones who have died, but also an opportunity to acknowledge those in our lives who have carried the message of God’s healing love for us, the many hands that the message was carried by, especially those hands that no one would have suspected.

Maybe a stranger, maybe a pet, maybe a song, maybe a cool Autumn breeze at sunset. God’s healing love can come from anyone and anywhere—all we have to do is be open to it, especially when it comes from the most unlikely of places. During this next hymn, please come to any of the tables and light a candle in remembrance of our loved ones who have died before us, and also in acknowledgment of God’s healing love from the most unlikely of places sometimes. Thanks be to God. Amen.