Since last week’s story of Bathsheba, we actually have not skipped a whole lot as we journey through the great stories of the Bible this Fall. King David eventually dies, but not before much turmoil within his family. With the guidance of Bathsheba, before he dies, King David chooses her son Solomon to succeed him on the throne. Still a young man, Solomon becomes king of Israel, and has his first encounter with God, which is where our story picks up. We find this new king at an altar, offering one of his famously extravagant sacrifices to God. At night, God appears to Solomon in a dream and says, “Ask whatever you wish, and I’ll give it to you.” Now, I told Debbie to do her best Robin Williams as the genie in Aladdin impression when she read the voice of God for us, but I don’t know what happened!

Seriously though, that’s the first thing I thought of when I read this story. “So, God is granting wishes now?” And this is purely a side note, although this would make for a great, if not amusing sermon. But we do treat God like a genie in a bottle sometimes don’t we—hoping God will grant our wishes that we lovingly call prayers? We all do it from time to time. Don’t pretend like you don’t! Trust me, we have worse behavior than that for God to get bent outta shape over!

But back to our story. God offers to give him anything and Solomon surprises everybody by asking for wisdom! Now, I know this guy is a Bible character that the writer looked up to but I couldn’t help but roll my eyes when he asked for wisdom! Like, come on Solomon! You’re killing me here! He could have had anything! I’ll be the first one to tell you right now that I would not have asked for wisdom, which is probably why that’s the one thing that I should ask for!

But no, I’d ask for something way more practical like having my school debt forgiven…sooo that I could tithe of course! Or I’d ask for good health…sooo that I could get to know my grandchildren of course! I’d find some way to try and play the system. Right now some of you are probably thinking, and this guy’s our pastor? Hey, ask the call committee members, perfection was not on my resume when I interviewed for this position two and a half years ago. But I digress.

So apparently, God was pretty impressed with Solomon’s request. God basically says, you could have asked for long life, money, or power, but instead you asked for wisdom…so I’ll give you everything! And then my skepticism of Solomon came out again and I thought, wait a sec, did he know God would react that way and that’s why he asked for wisdom? Well played Solomon, well played. Regardless of his motivations, things worked out pretty well for this new king, at least at the time.

God makes good on those gifts to Solomon and he turns out to be extremely wealthy, very wise, and very successful as Israel’s king. Well, until he wasn’t. It doesn’t take long before we learn that he is just as flawed as the two previous kings; so flawed in fact, that his sins actually contribute to the kingdom splitting in two, making him the third and final king of a united kingdom of Israel. But we’re getting ahead of ourselves. Let’s back up and focus on this gift of wisdom that Solomon asks for. 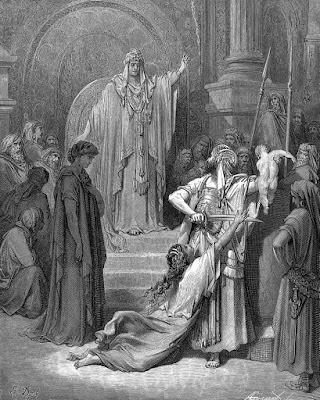 Right out of the gate, we get an example of just how wise Solomon is. He is confronted by two women, both had just given birth, but one of the babies died. Both women are arguing that the dead baby belongs to the other, and so ensues a back and forth of she said, she said. Solomon quickly grows tired of the arguing and comes up with quite a genius plan to sort out who the live baby really belongs too. And so, very matter-of-factly, the king asks for a sword to cut the baby in two, so that each get half, knowing full well, that the real mother would rather give the baby up, than see it killed.

And that’s exactly what happens, and Solomon is able to give the baby to the rightful mother. It’s such a dramatic little scene, very theatrical, which is one of the reasons why I love these stories so much! So, let’s explore wisdom a little more deeply. What is wisdom? Now, I’m not going to presume to answer a question that philosophers have been asking for thousands of years in this one little sermon. But if we’re going to get something useful out of this story, then I do think we need to get some kind of handle on what exactly wisdom is, specifically this kind of wisdom.

Because I think there are different kinds. There is a practical wisdom, which I would call street smarts, or just plain ol’ common sense, like learning not to put your hand in fire, or telling your spouse what you really think of that outfit. If you take a look at the book of Proverbs, which is full of wise sayings, it tons of these more practical kinds of wisdom, like this one: “When the righteous increase, the people rejoice, but when the wicked rule, the people groan.” No kidding? Thanks Proverbs!

Here’s another one, “Watch your feet on the way, and all your paths will be secure. Don’t deviate a bit to the right or the left; turn your feet away from evil.” Really, Proverbs? Watch where I’m going. Stay away from evil. Well I’m glad you’re here to tell us these things! The book is full of this common sense practical wisdom! But that’s just one kind of wisdom.

Hold that thought, and let’s first take a deeper look at what I’m talking about using today’s story. How does Solomon know that the real mother will reveal herself in this challenge? Is he just the gambling kind of person? Is he just hoping for the best here? No, it’s because he understands the love factor in this scenario. He knows that the love of the real mother will be unstoppable. Maybe he knows this because of the love of his own mother, Bathsheba. Or maybe he learned it from God. Wherever he learned it, it was more than just his knowledge of human behavior.

You can have all the street smarts in the world, all the common sense, all the knowledge, all the facts, even faith and hope as Paul puts it in First Corinthians, but “the greatest of these is love.” And speaking of Paul, he dedicates the first three chapters of his first letter to the church in Corinth, to what topic? Wisdom! He writes, “In God’s wisdom, God determined that the world wouldn’t come to know God through its wisdom. Instead, God was pleased to save those who believe through the foolishness of preaching.” I thought that part was funny.

He continues, “Jews ask for signs, and Gentiles look for wisdom, but we preach Christ crucified, which is a scandal to Jews and foolishness to Gentiles. But to those who are called—both Jews and Gentiles—Christ is God’s power and God’s wisdom…Christ became wisdom from God, for us.” And what’s most significant there, is that Paul connects wisdom with the crucifixion, God’s ultimate act of love.

It’s this love factor that bridges the gap between knowing right from wrong, to making decisions for the common good, for the betterment of those around us, even when, especially when there’s a cost for us—that’s a divine wisdom, the kind of wisdom that we see the Hebrew scriptures slowly progress towards, but coming to fruition in Jesus. Here’s a modern-day proverb to help us, from Desmond Tutu, a South African Anglican archbishop, “There comes a point where we need to stop just pulling people out of the river. We need to go upstream and find out why they’re falling in.”

Common sense,  common decency, tells us to just stay put and keep pulling people out of the river. It’s safe, and it’s working. If it ain’t broke don’t fix it, right? Besides, what if we go upstream and whatever is making people fall in the river, causes us to fall in too! No, no, no, no, we should just stay right here where it’s safe and just keep pulling people out of the river, and just call that our good deed for the day.

However, it is the people with divine wisdom, wisdom with a heart, wisdom tempered with love, that stops to think, “Maybe we should take the risk, and go find out why people are falling into this river in the first place?” And maybe even take it a step further to ask, “I wonder if they need help?” But that way of thinking, that kind of wisdom, cannot come without love—because love often comes from a place of sacrifice, and that sacrifice is often of our own safety, or at the very least of our own feeling of security. Here’s a real-world example of this. Immigration policy is a hot topic in our nation today, particularly where our southern border is concerned.

Now, a worldly wisdom would tell us to have strong borders, to keep our nation secure, maybe even to build a wall. That seems logical. Especially since so many people are trying to get into America. I mean, it’s been a tried and true tactic for nations across the globe for thousands of years. If it ain’t broke, don’t fix it, right? However, if we use a divine wisdom, the wisdom with love factored in, a sacrificial love, not just love for us but love for others as well, we see immigration policy from a different angle. A divine wisdom causes us to ask, “I wonder why so many people are trying to cross our border?” And maybe even to take that a step further to ask, “I wonder if they need help?”

That’s just one example of where we could apply this divine wisdom. How might our attitudes change if we applied that divine wisdom everywhere? Think of all the hot topics in the world today. I won’t list them for you. How might our perspective be changed if we were to incorporate a wisdom that is tempered in love? How might this love factor change the way we approach, not only issues, but people, in our world today? God is not calling us to apply a worldly wisdom, there is already plenty of that out there.

What God is calling, is pleading for us to do, is apply a divine wisdom, a wisdom with love factored in. And what might be our motivation to do so? Because God has already used the love factor on us. When God looks at us God does not use a worldly wisdom to see with us. No, God uses God’s own wisdom, and therefore does not see us as just the faulty people that we are, but as the children of God that we were called to be. All thanks to the love factor. Amen.