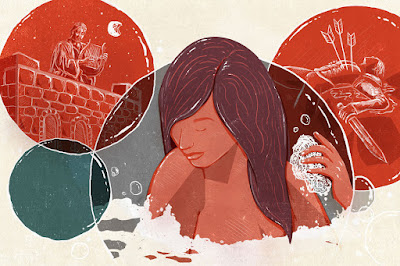 From last week’s reading from the end of the book of Joshua to this week’s reading about Bathsheba, we have once again, skipped quite a bit of Israel’s history. After the death of Joshua, the twelve tribes of Israel live in peace one minute and discord the next. Whenever they would need a single leader, someone from among them would be raised up to lead them out of whatever predicament they found themselves in, usually of their own making. Some of the more well-known names among those leaders are Deborah, Gideon, and Samson; hence, the book of Judges, in which the Israelites continually have to fight to maintain their new homeland. We also skipped the book of Ruth, which we will cover next year. And that brings us to the books of Samuel the prophet, where today’s reading comes from.

Before our story that we read, it covers Israel’s desire to have a king, like every other nation has. Apparently, they were tired of the temporary leaders that helped them out during the book of Judges, and so they thought the answer to their woes was to have a king. The prophet Samuel warns them that this is a bad idea, not to mention disrespectful to God, their current king. But they continue to gripe about it, something they’re experts at, and so Samuel gives in and anoints Saul as their first king.

Unfortunately, Saul is less than stellar as their king. Not only were his approval ratings low, but he turned out to be a bit mentally unstable, or at least that’s the way the author portrays him. And so, Samuel anoints a new king, the same boy who defeated Goliath; and this new king has a promising start. However, it doesn’t take long to discover that he is not much of an improvement over Saul; which brings us to our sad tale we have before us today: the rape of Bathsheba.

By this time in the story, he was already, as one scholar put it, a collector of women. He had numerous wives from all over the place, all simultaneously of course, as well as numerous children. The way scripture describes it, you’d think every place that this king went had a Wifemart for him to shop at. But in spite of having more wives than any one person could need, when he sees Bathsheba, he must have her—one more woman to add to his collection. And even after he inquires about her and finds out she’s married, it does not stop him. What the king wants, the king gets. And so, when Bathsheba’s husband is away, he takes her. And this sin of the king’s marks the beginning of the end of his reign, and more importantly, his humanity.

However, I would like to focus our attention on Bathsheba, something that history has not done much of, at least not in a positive light. Like so many victims of sexual assault, she is placed in the background of a larger story, in this case, a king’s story. However, she has a story of her own, and there are enough Biblical clues to flesh that out a bit. I find it fascinating that the author does not condemn her in any way.

Right from the start, the sin of this story is placed solely on the king’s shoulders. Bathsheba is introduced as a law abiding citizen, which is why she is bathing after her monthly period, an act required by law. Even the fact that she is doing it where she can be seen by the king is explained by the author. The king wasn’t even supposed to be home! He was supposed to be on the battlefield, where any other good king would have been! But this king was not.

And so, he takes her. This particular kind of crime against her personhood is often thought of as a crime of anger, or sadism, or just plain old lust. It is none of those things. This kind of crime is a crime of power—exerting power over another person, for a variety of reasons but power is the driving force. Take this story as an example. Could Bathsheba have said no? Could she have resisted? Possibly. But at what cost? Her life? Her freedom? Her family? We don’t know for certain that she did not already have children with Uriah. If she did, they would have been at risk too.

Whatever the cost, it’s safe to say that it was too high. That is the kind of power that he exerted over her, to have his way with her—power that he wielded as a weapon. His position as king alone was power enough over her. This was a man that she probably already knew, as her husband was high enough in the king’s army to have a house so close to the palace. And so, this king was familiar to her. Bathsheba has attended dinners with this king and her husband. She has seen her husband, whom she respects and loves, bow low to this king in honor and respect, time and time again. All of this is what is rooted in his power over Bathsheba. So to say that she was an adult, or that she knew better, just doesn’t cut it—and certainly doesn’t appreciate the nuances of this heinous crime.

As if Bathsheba’s violation wasn’t enough for her to bear, the king has her husband killed, so that he can have her all to himself, anytime he wants. More power wielded as a weapon against her. The king allows the appropriate time to mourn for her husband. How considerate. And then he takes her into the palace as his wife, to live out the rest of her days at the place of the crime against her, with the perpetrator of the crime against her, as a constant reminder for the rest of her life. And I want us to just take a moment to consider the strength that it must have taken; the courage that it required of her; the toll it must have cost her.

And I also want to take this moment to acknowledge the millions of women in our world today, including in this great nation of ours, who have been sexually assaulted, and have had to endure life afterwards, who have had to keep moving forward afterwards, whose stories have been placed in the background afterwards, whose names have been ignored. I’m not sure if you noticed but even over the course of this short story that we read today, Bathsheba’s goes from being referred to by name, to being referred to as “the wife of Uriah.”

But this is not the end of her story! Our author records that she went on to fight for her family. Bathsheba and the king have a son named Solomon who she attempts to raise to be the kind of king that her people needed. Though Solomon was not the king’s oldest son, he was by far the most qualified, as the king’s other sons were too busy fighting amongst themselves, even plotting each other’s deaths. And so, Bathsheba fights for her son’s right to claim the throne. And she succeeds! She gets to see her son, a product of a crime against her humanity, ascend the throne. What a proud moment that must have been for her.

The last story that we get of Bathsheba comes in the next book of the Bible, 1 Kings. It’s a moving little scene about one of the former king’s sons still vying for the throne. She protects her son from this usurper but that’s not what moved me. When she enters the throne room she is referred to as the Queen Mother. And when she approaches her son, he descends his throne and bows low to her, as he helps her to her own throne that he has placed to the right of his—such a seemingly simple gesture that could easily be overlooked, but is swollen with meaning.

Bathsheba is referred to once more in the Bible, but unfortunately not by name. At the beginning of the Gospel of Matthew, she is listed as an ancestor of Jesus, as the “wife of Uriah.” Even after all the years that had passed between her and Jesus, they still could not use her name. We can do better. May we give women’s stories the room to be told, may we give them our ears to listen, may we give them our hearts to believe them, and may we give them the respect to remember their names. Names like Bathsheba, Queen Mother. Amen.