Our Bible story for today from the twelfth chapter of Genesis is a pivotal one. For one, it marks a shift from some very fantastical stories to a more down to earth one—from stories with talking snakes and angel/human hybrid beings, yep those are in the Bible, to the ordinary, simple family of Sarai and Abram, who we will later come to know as Sarah and Abraham. Now don’t get me wrong, we will have our fair share of fantastical stories later on, like fire that doesn’t burn human flesh, or a talking donkey, yep, that’s in there too. But for now, we get a break from those kinds of stories, and focus in on this one family. Imagine a giant wide-angle lens that’s able to capture not just mountain vistas, not just the entire planet, but the whole of the cosmos, that’s where the Bible begins, only to rapidly zoom in on this one family.

But why this family? What was so special about this family, or for now, this couple? Sarai and Abram did not have any children, he was already seventy-five years old, and they hadn’t done anything of note thus far. They were just a typical Mesopotamian couple in what is modern day Iraq. Now contrast that with last week’s story of the Flood. In that story, Noah was chosen why? Because he was the most holy and righteous man in the world! The author just gushes over Noah and how amazing he was!

So, of course, Noah is the one that God chose to bless by saving his family from the flood. So, in a sense, Noah was rewarded for his good behavior. What I love about the story of Abram, is that he was chosen, not for his good behavior or his holiness, but out of God’s pure grace. And this becomes a pattern of God’s, choosing ordinary people and families for extraordinary purposes, all the way up to choosing the ordinary family of a carpenter from Nazareth, but let’s not get ahead of ourselves!

Another reason why this is such a pivotal story, and probably the most important reason is because of the promise found in it. Out of nowhere, God says to Abram, “Leave your land, your family, and your father’s household for the land that I will show you. I will make of you a great nation and will bless you. I will make your name respected, and you will be a blessing.” The promise is threefold: there is a promise of land, a promise of children, and a promise of blessing for the entire planet through said children. And it is this threefold promise that the rest of the Bible is based.

For a visual, the promise found on this page, is the foundation for all the other writings found in this book. This promise is going to come up again and again throughout the Bible as a reminder. Sometimes it will be us who are the recipients of that reminding, and sometimes it will be God who gets the reminder. Which is why these old stories that we think we know so well are all the more important to return to as our foundation. Because, this promise of blessing to the entire planet that we read here, all the way back in the twelfth chapter of Genesis, is ultimately fulfilled in Jesus, but again, let’s not get ahead of ourselves!

So, we’ve established that this is a pivotal story, and maybe the most foundational story in all of Hebrew scripture, and if that’s all that we took away from this that would be a lot. But I think we can get even more from this story, particularly something that is a little more useful for us in our day to day lives. So, I’d like to share something that stood out to me, that in all my previous readings I had just glossed over—which is the beauty of scripture isn’t it, no matter how many times you hear a story, you often hear something that you never heard before, or that just wasn’t important before. At least, that’s the effect scripture has had on me.

And with this reading of this story, it was the two altars at the end that stood out to me. You may have missed it, toward the end of our story the author writes that “the Lord appeared to Abram and said, “I give this land to your descendants,” so Abram built an altar there to the Lord who appeared to him. From there he traveled toward the mountains east of Bethel, and pitched his tent with Bethel on the west and Ai on the east. There he built an altar to the Lord and worshipped in the Lord’s name.” 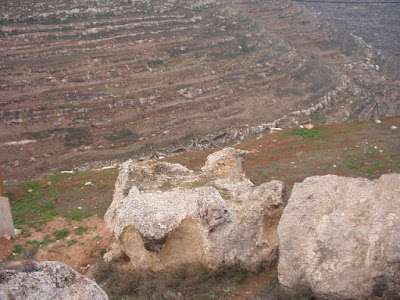 The mention of an altar in the Bible is quite common, so common it’s easy to just skim right over them. More often than not, they were quite simple, often just a pile of stones, placed together, usually square in shape. They could be very ornate but usually looked more like the one pictured here, which was discovered in Israel. Small altars like this were made, not for sacrificial purposes, but to remember, to commemorate, to celebrate something that had happened.

And in this case, Abram is simply celebrating God’s appearance to him with that three-fold promise. Now, what strikes me about Abram doing this is, he had no idea if God was going to make good on that promise. It’s not like God was handing out a guarantee with each promise that said, “If you are not happy for any reason please contact me for a full refund.” No, and let’s not forget that Abram is already in a vulnerable position having just been asked to leave his family, his only home he’s known, his country even!

But none of that keeps Abram from commemorating, celebrating, God’s presence and promise. For Abram, that is enough for now. Whether or not God will come through is secondary for him. Abram is content to recognize the power in the seemingly simple act of promise, without the need to wait to see if it is kept. Now, this seems like a pretty super-human act of faith but, we are not only capable of this, but we do this too. Marriage is one example of this.

Think about it, we make a big fuss over weddings, spend lots of money, celebrate it ‘til we’ve run out of credit. And what exactly are we celebrating? A promise, a promise between two people, before their friends and family and God. But here’s the kicker, no one in that room knows if the couple is actually going to keep those promises! No one at a wedding, including the couple, can guarantee that those promises will be kept, and that all that money they spent was worth it. But that doesn’t stop us from celebrating it does it? Because there is power in a promise and it’s worth celebrating. That and people just like to throw weddings and then get drunk afterward but I like to think that there is power in promise!

If our baptisms came with a money-back guarantee, there’d be no need for faith. But that doesn’t mean we don’t celebrate each baptism right? We bring out our Sunday best, and white gown, and have a big white cake afterward! Why? Because there is power in a promise, and it’s worth celebrating. Like Abram of old, who was called out of his home, away from his family, to a different country, out of his comfort zone with nothing but a promise to guide him, we too are called out of our comfort zone, expected to risk much, with nothing but a promise to guide us. And like Abram, we don’t know if that promise will be kept. But also like Abram, we recognize that we don’t have to, to celebrate a promise just for what it is, a gift that gives us hope, and feeds our faith. Thanks be to God. Amen.