Today, we begin our journey through the great stories of the Bible with one of the most horrifying, violent, catastrophic stories of all the books of the Bible! It continues to astonish me that we have turned this disturbing, murderous story into a cute little children’s tale! My firstborn’s room was covered in Noah’s Ark scenes! The wallpaper, mobile, stuffed animals, blankets, pillows, all had selected scenes from this story. Selected scenes! There were some scenes of course that were intentionally left out.

Now, at this point of the sermon, I was going to share with you some graphic scenes of how I imagine the flood taking over the land and people and animals, but then I reconsidered. But this is a sad story! Imagine if this was filmed? You think those SPCA commercials are sad? You know the ones, with Sarah McLachlan singing her song Angel in the background? Now imagine that song only with scenes from the flood! Yeah, that kind of sad.

But for some reason, all the horrifying aspects of this story, have traditionally been glossed over. And I think they did that for at least two reasons. One, it’s easy to, because we are on this side of the flood. Meaning, we are on the winning side of this story. So it’s been easy for people of faith over the centuries to dismiss the violence. But the other reason they have done that, a deeper reason mind you, is because they didn’t like to dwell on what this says about God.

Think of it this way, if we just took this story at face value, then we are saying that God, disappointed in God’s very own creation, decided to murder everyone, animals included, except one family and the animals they brought. And we’re just supposed to be ok with that? I mean, is that really the God we believe in? Is that really the God you and I have come to know? I’m arguing with an emphatic no! That this kind of behavior is actually contrary to what we have come to know about our God.

So, how do I reconcile that with my love of scripture? And I do love scripture! And not just as a piece of literature, but as a vehicle that God has used, through humans, to communicate some of God’s most precious truths. But the key phrase in that sentence, for today’s purposes, is through humans. God did not write the Bible with God’s own hand, but used human hands to craft it, which meant human minds, which meant that humans got to interject their own truths as well, and some of them are false truths. So, what does this have to do with the Flood? Well, one of those false truths got inserted into this story. Tell me if this sounds familiar because we still do this to ourselves: something bad happens, and so we must have deserved it.

As a pastor, I come across this bad theology all the time. Whether it’s after an unexpected death, or some other life tragedy, or maybe after a natural disaster like in our story for today, so many of us ask the question, “What did I do to deserve this?” We skip asking, “Did I do something?” and go right into, “What did I do?” Or, what did we do to deserve this?” But, whether we get that answer or not, the question implies that there is some outside force that caused this bad thing to happen to us, as punishment for whatever we think we did to deserve it.

And what outside force do we attribute these punishments? God! And why do we do that? Because of stories like the Flood, that give us a scriptural basis to believe such false truths. And I ask again, is that really what we believe about God? Is that really how we believe God works? I don’t. And you don’t have to either. In fact, you can refuse to believe that and still continue to love scripture! How about that!

Because when we remain in such false truths, all we do is set ourselves up for failure and despair. Because the hard truth of life, as many of us know, is that at some point, at many points for some of us, bad things happen! It’s inevitable! There’s no escaping them. Some are worse than others sure but we all have them. As my Hebrew professor used to say, sometimes stuff happens! Only she didn’t say “stuff!” And there doesn’t have to be some cosmic reason why “stuff” happens. But if we allow ourselves to believe that, that one, we deserve it, and two, God did it, how are we supposed to climb out of that, and then continue in this relationship with God as if nothing happened? Too many cannot, and then we wonder why people aren’t going to church these days, or have given up on religion altogether.

Well, at least one reason is because so many of us maintain these archaic ideas about God, and we do so because they’re supported in scripture. But here’s how I and many others approach the Bible that can make all the difference. It is a collection of writings, of all different genres, poetry, drama, comedy, romance, fantasy, political, song, you name it, it’s probably in the Bible somewhere, but all of them are there for one purpose, to try and figure out who God is, and who we are. And some of those writings are successful at that and some of them fail, and some of them do both. I’m guessing that most of them do both. And this story of the Flood is an example of just that.

The stories found in the Bible are the ones that survived for hundreds of years as oral stories before they were finally written down. Imagine that, being only spoken for hundreds of years before someone finally thought, “Maybe we should be writing these down!” And so they did, and here we are reading them thousands of years later. And so we have to ask ourselves, why these stories? What was so important about these stories that survived? What were the ancients of our faith trying to communicate to us about God and ourselves? What was God trying to communicate through them to us? And where did they succeed in that transmission and where did they come up short?

Some fascinating questions, that can lead to some very fruitful and life-giving conversations if we let them, if we aren’t afraid of them. In this story of the Flood for example, if we can get past the fact that God may in fact not be a murderous perpetrator in this story, and that there may be other reasons why the author would put that in there, if we can get past that, then we can ask, what else can this story teach us about God and ourselves? Are there Godly truths here to be gleaned, in the muck of the human false truths that got slipped in there? And most importantly, is there gospel to be found here? Is there good news to be found in this story?

And the answer, of course, is yes, and here are two that stood out to me, but of course there are more than two in a rich story such as this but I’ll leave those for you to glean and chew on this week. The first is this, we are not perfect, and we never will be. In this story, God realizes just how imperfect we are. So imperfect, that we have made a mess of creation. And so God, according to the author’s interpretation of things, comes up with this final solution to wipe out 99.9% of creation and restart from there.

Now, again, if you can get past that, and I know, it takes a few leaps and bounds—by the time we get to our Gospel readings in Advent, we’re gonna be in great shape let me tell you, we’ll be able to leap tall buildings in a single bound!—but if you can get past that, you come to the part where God has another realization, after the Flood, unfortunately, when God realizes that humanity is going to be just as imperfect, and will always be so, no matter what God does, and so comes to a decision.

God could have completely started over at this point right? We would have never known! Many other cultures have their gods doing just that in their creations stories! Completely starting over! The Aztec gods took five tries to get it right! But that’s not what our faith ancestors were trying to communicate to us about our God. They wanted us to know that our God, instead of starting over and trying again, decided to just love us, imperfections and all. And so, God does a very ungodly thing, compared to the gods of other cultures, and sets God’s bow down in the clouds.

Now, remember how I said that we have turned this story into a cute little children’s tale? Well, one of the ways we have done that is read the word bow and thought rainbow. Because rainbows are pretty! Who doesn’t love a rainbow? If you don’t like rainbows you better check for a pulse! Everybody loves rainbows! However, I hate to burst your bubble, but it’s actually not a rainbow that the author is writing about. 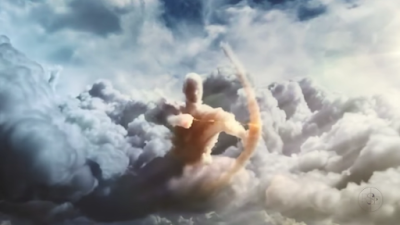 In the original Hebrew, it’s actually a bow, as in the weapon kind. Not a pretty rainbow. But what I love about that is, again, what were the ancients trying to convey in this image of God setting God’s weapon down in the clouds, never to be used again? That our God is so committed to us, in spite of our imperfections, faults, brokenness, sin, whatever you want to call it, that God is permanently setting down God’s weapon of war. God has committed to not fight with us over this.

God is committed to not trying to make us into something that we are not, that we will never be—perfect—and instead, commits to loving us just the way we were created. And so, as one Luther Seminary professor put it, God is changed in this story, not us. God is changed because that is how much God loves us, and is committed to us. It is not our commitment or faithfulness that is going to see us through the floods of our lives, it is God’s commitment, it is God’s faithfulness to us that will. Thanks be to God. Amen.