The Pumpernickel of Life

So we are still in the sixth chapter of the Gospel of John, as we have been for three weeks now, and where we will remain for the rest of the month. It’s a long chapter and Jesus had a lot to say about the bread of life, as he keeps referring to it over and over again in this chapter. The challenge for us preachers is to find something new about it every week. Thankfully, Jesus, at least through John’s eyes, is pretty long-winded in this Gospel, so there’s a lot to work with. However, there are some overlapping verses each week. I share all this with you because if you aren’t already, by the end of the month you may be asking, “Didn’t we already read this recently?” It’s going to start sounding a bit repetitive, but hey, it’s John, what did we expect?

Last week I focused on a question from the crowd in our story, and I’m going to do the same today as well. So, in our story for today, a particular group in the crowd is beginning to grumble. Every church has a group like this right? If you don’t know who those people are at Bethlehem then you’re probably part of that group. Kidding! Just kidding, Bethlehem doesn’t have any grumblers!

Anywho, these grumblers are identified in this translation as the “Jewish opposition.” Now, as a side note, past translations used to just say “the Jews” rather than the “Jewish opposition.” This is problematic for a couple reasons, first, labeling them with the blanket statement “the Jews” is anti-Semitic, because, secondly, it’s just not accurate. Think about it, not all Jews opposed him, his own disciples were Jewish, Jesus was Jewish! But like any group, there’s a subgroup of nay-sayers. And that’s who John is referring to here.

So these nay-sayers are grumbling, like we all catch ourselves doing from time to time, and they grumble with this question, “Isn’t this Jesus, Joseph’s son, whose mother and father we know? How can he now say, ‘I have come down from heaven’?” So this group is being very logical about all of this, which makes it hard to debate with a group like this. In their minds, they know his mother and father, they probably remember seeing Jesus as a little boy, climbing trees, getting on his mom’s nerves, doing all the ordinary things that little boys do, and they’re like, “Came down from heaven? I remember seeing this kid play in the mud! Came down from heaven? Get a load of this guy! Pshhht.” Or as one commentator put it, “He’s clearly not from heaven—we know his parents.”

These grumbling nay-sayers, can’t see Jesus for who he really is: the word made flesh, the bread of life, come down from heaven. They just can’t see it. And also like last week, it’s our sight that Jesus is trying to help us with. Last week Jesus was trying to help us see the signs and blessings all around us. This week, Jesus is trying to help us see the divine, the spiritual, in the ordinary stuff of life, in the flesh and bone of life. And if you think about it, that skill is pretty foundational to our life of faith. I mean, if we can’t do that, if we can’t see the spiritual in the ordinary, then what are we even doing here? Our whole faith is based on that concept. The Christmas story is rooted in God coming down from heaven, in the form of an ordinary baby, born to ordinary parents, in an ordinary smelly old barn.

Particularly for John, our author, if as the reader we don’t come to that conclusion, then he’d consider himself a failure. If we get nothing else from this Gospel, he’d at least want us to see the divine in this poor Rabbi, born a carpenter’s son. Now, to be fair to these Jewish nay-saying grumblers, seeing the spiritual, seeing the divine in the ordinary, is no easy task. We humans, struggle with this on a daily basis and on a global scale.

So why do we have this problem seeing? Because deep down inside, I don’t think we really want this bread of life that Jesus is offering. Why? Because it’s too hard to swallow! Pun intended. It’s too hard to swallow because if you’re going to buy into this “I am the bread of life come down from heaven” business, than that means that you have to what? Take Jesus seriously! Take Jesus’ teachings seriously! Treating people like human beings. Putting other’s needs before your own.

Making your faith life and the faith life of your children and grandchildren, a priority. Which means coming to church every Sunday, notice I didn’t say regularly, because we all have a different idea of what regular attendance is don’t we? I know that game! Praying regularly. Reading your Bible regularly. Sacrificing your time, talents, and treasure for the sake of the mission of the church. 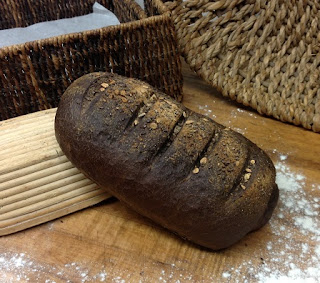 That’s a lot of work! That’s a lot of sacrifice! Why do you think Jesus calls his bread the bread of life? Because the bread of life is Jesus! And Jesus, causes you, to bring life into this world! Or at least, that’s the way that it’s designed to work. That is, until we take Jesus bread of life and realize that it’s pumpernickel! And if you like pumpernickel, just substitute whatever kind of bread you don’t like. Point is, sometimes we just don’t want it! Now, I’m not just making this up, there’s a clue in the text itself about this.

It just means we don’t want to do it! Even though it may be the best thing, the most life-giving thing we could do. Next week, we’re probably going to talk about how all of this bread of life talk connects to that table. But for now, let us work on our inability to see the divine, to see the spiritual in the ordinariness of our world and how taking Jesus seriously as the bread of life come down from heaven can help with that, even if we don’t like what that means, even if it turns out to be pumpernickel. Amen.