I learned some of the worst eating habits growing up. Hopefully my mom doesn’t hear this sermon. Seriously though, I think I struggle with my weight to this day partly because of the eating habits that were formed as a child. For instance, we were expected to serve a “healthy” portion of food, and by healthy I mean a good size mound of food on your plate. If you didn’t, you got a weird look, or were asked if you were sick, or, depending on the mood of the cook, it was taken as an insult to the cook.

Not only a healthy portion but you had to take a portion of everything that was made. You couldn’t pick and choose what you wanted to eat no matter how much you don’t like vegetables! And just for added measure, there was a nice layer of guilt thrown in, because after all, the cook has worked all day and then came home to cook for you, and that’s all you’re going to eat, after the cook slaved all evening in the kitchen? Many times this was all communicated with just a look mind you but we got the message. And don’t get me started on the reaction when you didn’t get seconds!

But an even worse habit existed, and this one has been diabolical to my belly! I don’t know if you had this in your family or if you called it something different but in my house it was called “clean your plate.” And of course, it doesn’t mean take your plate to the sink and wash it. No, it’s even more sinister than that! “Clean your plate” meant that not only were you guilted into serving more than you probably should have, but now you have to eat it all, whether you are full or not! “You served it, you eat it” was a common catchphrase in my house. Did you all have stupid little catchphrases like that growing up? Parents think they’re cute don’t they? We had a lot of them. Sometimes I think my mom thought she was running a convenience store at home, “No shoes, no service”, “You serve it, you eat it.”

That’s got to be the worst eating habit I was taught though. To this day, it is so difficult to walk away from a plate that still has food on it, even when I am full. But the expectation was, you had to consume all of it, in its entirety—every serving of every dish that was made, that you put on your plate. There was a comprehensiveness to dinner time at our house growing up. It was an all or nothing affair. And we always ate together. Taking your plate to your room or eating later after everyone else, was just not an option. This is how you ate if you were going to be part of my family. Period. You served a healthy portion, of every dish, you got seconds, you ate it all, and you ate it together. Or you just didn’t eat. That option, as we were constantly reminded, was always on the table.

As we continue reading through the sixth chapter of John this month, today we come to one of the most disturbing passages in this Gospel, outside of the crucifixion. Jesus, who is still continually referring to himself as the bread of life, or the living bread that came down from heaven, as we heard last week, gets a ton of opposition to this kind of language, but instead of dialing it back, what does Jesus do? Doubles down!

“You think that was disturbing?” Jesus says. “Try this on for size, ‘unless you eat the flesh of the Human One and drink his blood, you have no life in you.” If John was a playwright, you’d see in brackets, audible gasp from crowd! [Gasp!] Because that would have been scandalous to their ears! I can’t think of something that would have been harder on their ears than that! Unless he said, that now they had to eat bacon wrapped shrimp! Because Jews aren’t allowed to eat shellfish or pork, for those who didn’t get that joke.

I mean, it’s hard on our ears to hear this kind of talk from Jesus, it was doubly hard on their ears because dietary laws were so ingrained in their religion. Something we just don’t have in Christianity. Now normally, when you hear this passage, most pastors will immediately point you to the table, to communion, to the bread and wine. But as you have come to learn, for better or worse, I’m not normal, nor am I like most pastors. So I’m not immediately going to point you to what goes on here at this table every Sunday after reading this particular passage, at least not yet.

It’d be too easy to jump right to communion talk right now and quite frankly, it’d just be lazy preaching. We can get there, and probably will, and there’s nothing wrong with interpreting this passage in light of this table but let’s not start there. Let’s start by reading this passage, as if this table, and what happens there, doesn’t even exist. I know, scandalous right. Well, at least I’m in good company.

Here’s why I feel compelled to ignore the table for right now. This is only the sixth chapter of John. The last supper is far down the road, chapters and chapters away. The likelihood that Jesus had the image of people gathering every Sunday around a table of bread and wine while he said, “unless you eat the flesh of the Human One and drink his blood, you have no life in you” is highly unlikely. John may have, while he was writing this, but Jesus probably did not. So if Jesus wasn’t talking about communion, then what was he talking about? Last week we talked about taking Jesus seriously when he claims himself to be the living bread that came down from heaven, and what that actually entails, especially when his bread isn’t exactly what we wanted, or when it causes us to do things we don’t really want to do.

In this week’s passage, Jesus is just driving that home, hard. Albeit, using some disturbing, if not altogether crude language. But he gets his point across. Think of it this way, when Jesus talks about eating his flesh and drinking his blood, that’s his way of saying, it’s all or nothing people. I’m not a buffet. You can’t pick and choose which parts of me that you want to consume and which parts you’re just gonna pass on. Neither does Jesus work at Burger King, he’s not here to make it your way. As odd as this may sound, Jesus was a “It’s my way or the highway” kind of meal. Let me give you a few examples of what he’s talking about here. We can’t pray “hallowed be your name” and then use God’s name to persecute others. We can’t pray “thy kingdom come” and then not lift a finger to help it get here. 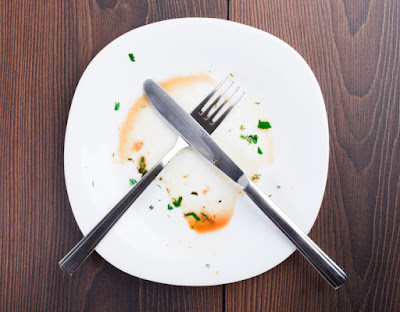 We can’t pray for “our daily bread” and ignore the needs of the hungry in our world. We can’t pray “forgive us our sins” and hold a grudge. We can’t pray “deliver us from evil” and then turn a blind eye to the evils of this world! Jesus says, “Uh-uh, this is my house. And when you’re in my house, you’re gonna clean your plate!” Jesus is offering new life for this world, and the only we can serve it to this world, is if we eat all that Jesus is cooking up! Every dish, every side, every vegetable, not just the juicy meats of salvation but also the Brussel sprouts of service to this world. Every last bite! Because Jesus is not a buffet! Jesus is the living bread, come down from heaven, right onto your plate! And like a loving mother, Jesus asks, “Are you gonna clean your plate today?”

So, whether we realize it or not, when we come to this table, we are answering Jesus with a resounding “Yes!” “We’re going to clean our plate this week.” For that is exactly what we are doing when we come to this table, with hands outstretched, we come to consume all of Jesus, everything he’s cooked up for us. The tasty, deliciousness of his love and forgiveness—and the bitterness of his call to service and sacrifice on behalf of the world. “I am the bread of life,” Jesus says, “living bread that came down from heaven.” So come, consume all of me, Jesus asks, flesh and blood, for the sake of the world, to bring new life to the world—through us. Thanks be to God. Amen.