Signs. Miraculous signs at that. These are what the crowds are asking for in our Gospel reading for today. Which is ironic because this is already the sixth chapter of John and they have seen signs, they have seen miraculous signs. Just last week, you heard the passage right before this one, same chapter in fact, of the story of the feeding of the five thousand! One of the biggest signs that Jesus ever gave!

As the reader, you might already be getting impatient with the crowds, wondering, “Come on people, when will it be enough?” And there’s the rub. We don’t ask that question of them because we know, we are them. We are the crowd who never has enough. Who is always looking for more. Who is rarely satisfied. And that may lead us to the biggest lesson we can learn from this story. But first, we have to acknowledge that we are a people who are constantly wanting more. And part of that I think is just our human condition. We are wired that way for some reason. Some have called that original sin. Some have called that a biology of survival.

However you want to label it, it just seems part of who we are as humans. But the other side of that is this, I also think it’s part of our American culture. O God, there goes pastor being critical of America again, he’s only been back for a minute! Calm down. American capitalism has brought many things for us to be grateful for, but I also think that it has enhanced, in much the same way a steroid does, something that was already part of our DNA as humans, and that is this trait of never being satisfied.

So it’s with that in mind that I’d like to dive a little deeper into this question from the crowd, from us, for more signs, for more miracles. Why do we do that so often? Where does that need come from for more signs and miracles? Well, the pessimist in me wants to just stop at our lack of ever being satisfied. We want more, more, more, and that’s all it is. However, if we give ourselves the benefit of the doubt, which is healthy sometimes, I also think that we have a need for signs and miracles because we know that if we get them, we are that much closer to the divine.

And who doesn’t want to be closer to God? When we ask for a miracle, when we ask for a prayer to be answered; let’s say, you ask for her to be healed, and then it happens! That means that God was right there, right next to you! And you have a sign to prove it! Now, I don’t want to get into how prayer really works, let’s not go down that rabbit hole. That’s for another time and place.

For now, the only point I’m making is that sometimes we want more signs and miracles for selfish reasons, and sometimes, we want them to be closer to God. And God knows that, and I think God can appreciate that as well. However, I don’t think this is what Jesus is trying to help us with in this story. Yes, we first have to acknowledge this as part of our human and American behavior but that’s only the start. What I really think Jesus is trying to help us with, is opening our eyes—opening our eyes to see the signs all around us, the miracles all around us. But specifically during those in-between times, in between the signs and miracles and answered prayers. During what seem like dry spells of our spiritual lives, when God seems farthest away from us. Those are the times that Jesus is really trying to help us with here.

Because let’s be honest, those times are tough. And they’re not always dramatic, they’re not always a valley of the shadow of death, though sometimes they are. Many times though, those dry spells go unnoticed, that’s when they can do some real damage. I realized this last week. I noticed that I was just kind down in the dumps, and it was causing me to be negative about everything.

And what brought me out of that was a devotion that another pastor shared at a synod candidacy committee meeting in Berkley, which I was at. Her topic was grace, and she asked us to go around the table and share where we were seeing grace in our lives. And I was almost the first person to raise my hand to answer, which believe it or not is a very typical thing for an introvert to do when asked to share something in a group setting, “Let’s just get this over with” is what runs through our head. But I’m glad I didn’t.

So, my list kept getting bigger and bigger as people went around the room getting closer and closer to me, and when it got to my turn I shared a few, not all of them of course, because, introvert. But I still had a growing list of signs in my head that I could then take with me the rest of that day and beyond, and lo and behold my mood was changed, my negativity replaced with positivity. And positivity can be just as contagious as negativity, amen?

This is what Jesus was trying to get across to the crowds, who, God bless them, just weren’t getting it. Jesus was trying to point out that God was, and is, and will always, provide signs, miracles, big and small, blessings upon blessings, all around us. So, instead of the usual silence for reflection after the sermon today, I’d like to give you the same question to think about while Owen sings a song for us. I want you to take stock of the many signs around you, the many miracles around you, maybe they’re sitting right next to you, maybe they’re far away. 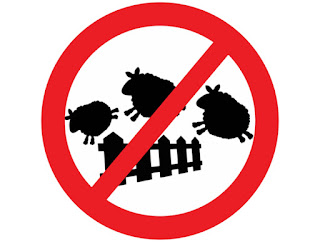 I want you to count your blessings, the signs of God’s love and presence all around you—the miracles that God has provided you. I want you to practice this here because the real homework is to remember to do that when you need it the most; to count your miraculous signs and blessings when you need it the most. When you are down in the dumps. When you are being negative and just can’t bring yourself out of it. When you are stressed. When you can’t sleep. Or maybe even help someone else do that, when you see them in that state of mind. As that old Irving Berlin song goes,  “If you're worried and you can't sleep, count your blessings instead of sheep.” May God’s miraculous signs and blessings be ever before our eyes. Amen.