So, you might be wondering, why in the world are we celebrating the nativity of John the Baptist today? Well, it occurs every year on June 24th, but it only lands on a Sunday every once in a while. So, whenever a special day lands on a Sunday, I like to observe it. And if you’re wondering why June 24th, there’s two reasons: one, it’s exactly six months before Christmas Eve (remember, Luke records that Elizabeth was six months pregnant when the angel told Mary that she would have a child); but also because, it’s close to the summer solstice, when the daylight begins to be shorter with each passing day, in the same way that John the Baptist said that he would decrease, so that Jesus could increase. So, there’s a little Bible trivia for you. Use that at your next cocktail party if you find yourself talking to someone that you just want to get rid of.

But let’s move on. My family has had quite an adventure when it comes to naming our children. Our poor firstborn got stuck with a boy’s name because someone was absolutely sure we were going to have a boy! And when our daughter showed up, we hadn’t considered any other names, so Jonah she was. And we really had fallen in love with that name, which comes from the Hebrew word for dove. Little did we know how much in common she would have with the Bible character of the same name!

After she was born we weren’t sure if we were going to be able to have another due to Sara’s endometriosis, and after yet another miscarriage, we had all but given up hope for another baby. But then our second daughter beat the odds and arrived just in time for Christmas on December 23rd, and it only seemed appropriate to name her Grace, which comes from the Latin word for thankful. And as if the name Jonah wasn’t hard enough for my parents to grasp, when they heard Grace, their first response was, “That’s a word not a name!” Until I said, “You know, like Grace Kelly!” Then they were like, “Oh, well that’s beautiful!”

Then we were graced with one more, another daughter. And this is probably the craziest of our naming stories. So, we have this baby naming book that we used to gather ideas for all of our children’s names. And when we spotted Jesha, spelled just the way it sounds, J E S H A, we immediately fell in love with it and its meaning. Then, a little further into Sara’s pregnancy, I was thumbing through that baby name book and lo and behold, Jesha’s name wasn’t there anymore! I know, creepy! I showed it to Sara and said “Look! It’s gone!” She couldn’t find it either! Now, it turns out this was no miracle, we’re just kinda dumb. Cuz you see, each name in this book began with a highly stylized first letter in calligraphy.

So what we thought was Jesha, was actually Iesha, which although a pretty name, we didn’t like it! We were so bummed because, like Jonah, we had already fallen in love with it. But meanings of names were important to us. So I was then on a mission to find out if Jesha was indeed a real name, and if so, what did it mean! It took forever, but thanks to the internet, I finally found an occurrence of it in a Jewish short story, written in Hebrew. And with a little more research found that it comes from the Hebrew word for salvation, the same root that Jesus’ name comes from. And with a sigh of relief, we were sold—and Jesha she was. 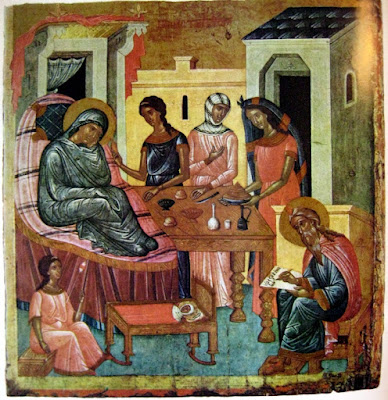 In our Gospel story for today, we have the story of the naming of John the Baptist. So the story really revolves around his parents, Elizabeth and Zechariah. The day should really be named after them! They are an extraordinary couple, with some very rich stories surrounding them, and this story is no exception. And they too have one hell of an adventure naming their new baby boy!

We didn’t read this part so as a quick reminder, the reason why Zechariah had to write the name on a tablet was because he lost his ability to speak. Nine months prior, an angel appeared to him to announce the birth of his son and Zechariah didn’t believe the angel because they were already very old and had suffered through infertility on top of that! Who would blame him for having a few questions about this supposed pregnancy? Regardless, the angel took away his ability to speak as punishment.

So, they were already off to a rough start in this baby naming adventure. Then, when it comes time for Elizabeth to announce the name to the family, she gets even more grief. You know how in-laws can be! They weren’t having any of this “ohn” business because no one in the family had that name! Now, this might sound kind of weird to us westerners but we have to understand that they treated first names very similarly to the way we treat last names.

Think of it this way, it would be like me giving each of my children a different last name, a last name that had no connection in any way to either my wife and I, like: Jonah Solo, Grace Skywalker, or Jesha Amidala. Oh, I kinda like that sound of those. Why didn’t we do that? Anyway, that’s how ridiculous this John business was to them. This wasn’t just about a first name for them, this was about family, this was about heritage, ethnicity, legacy! And to Zechariah’s family, they were throwing all of that away in one fell swoop.

So for Elizabeth to say “his name will be John”, that was a powerful statement of faith in and of itself. And she knew what the reaction would be, and yet, she still stood there, and I imagine her taking a deep breath before she said, “his name will be John.” And of course, they were living in a sexist, patriarchal society, and so they dismissed her and looked to Zechariah to tell them that the old lady’s lost her mind! But no, he asks for a tablet to write on, I’m assuming it was an IPad, and he writes the name John. I imagine an audible gasp in the room as they read the name! And then something miraculous happens. As soon as he writes the name John, he can speak again, he is released, he is freed. And it’s no surprise that the name John means God is gracious.

All this has me thinking about the hard work of naming. And I don’t just mean naming babies. However, that is definitely hard work as we have heard today. But I’m also talking about naming things, and not just tangible things but intangible things, both positive and negative. Let me give you an example, let’s start with negative things so we can end on a positive note. Let’s talk about how hard it is to come to terms with our sin, our shortcomings, our flaws.

Think about how hard it is to admit them! Many of us grew up in generations or in families where admitting something like that was a sign of weakness! But even if you didn’t, no one likes to admit their flaws, or wrongdoings! That’s one of the worst feelings in the world! But until we can name it, we cannot overcome it. And this applies both to our sins as individuals, but also our corporate sins, which could be our sins as a family, or our sins as a congregation, or our sins as a nation.

My family and I were watching the news the other night, the night that audio recording was released of children in an “immigration detention center.” I asked if they had heard it yet, and they hadn’t, and so before I played it for them, I explained what it was that they were about to hear. Jesha’s response, before I even played the recording, was, “So, they’re torturing kids now?” The one whom we named Jesha asked, “they’re torturing kids now?” And you know, my knee-jerk reaction to that in my mind was “No! Our country doesn’t do that!”

And then we sat there and listened to the whole thing. And if you haven’t done that yet, please do. Your pastor is requesting that of you. We sat there and listened to little children crying, crying for their papa, crying for their tia. We listened to a six-year-old negotiate with a guard to get a phone call. We listened to little children alone, abandoned, horrified, scarred for life, with hope bleeding out of them. When it was over I turned to the one we named Jesha and said, I think you were right to begin with. Our country is now torturing little children. My friends, as difficult as it is, sin has to be named for what it is, if we have any chance of overcoming it, of being released from it, of being freed from it.

But I told you that we’d end on a positive note and I am many things but I am not a liar! We also struggle with naming positive things about ourselves too. When was the last time you heard someone say “I am really good at blank.” It is so hard for many of us to say something like that! Some of us are better at it than others but I think for most of us, that is an impossible task! Thanks again to our upbringing! We’ve been trained to be humble, to not be a brag.

But imagine if we could bring ourselves to name our God-given gifts and abilities! I honestly don’t think we would fall into some kind of egotistical self-righteous realm that we are afraid of! I think it would motivate us to use those gifts even more, free us to live into those gifts as God intended! Try it sometime! Try it with someone safe that you know won’t judge you. Name what you’re good at and see what kind of effect that might have on you. And if you’re already good at that, teach one of us who struggles with that how to do it!

Naming has power my friends. Whether it’s the naming of child, or a puppy, or a car, or a sin, or a gift. Naming has power. Power to release. Power to free. Power to grow, to transform. Naming has the power to push us to live out our days as the body of Christ that we were made for, so that we can release and free the world around us, just as we have been.

But remember, it’s hard work this naming business. It’s a buckle your seatbelt kind of adventure; a keep your arms and legs inside at all times kind of ride. And sometimes, it’ll go against our grain, or those around us. And we will be tempted to just leave this naming business to someone else. When you feel that temptation, to not do the hard work of naming, I want you to picture in your mind’s eye, Elizabeth, standing tall amidst a room full of naysayers, steeling herself with a deep breath, and proclaiming with a confident faith, “His name is John.” Thanks be to God. Amen.