Every year, with each new Journey of Faith group, when we get to our exploration of the Apostle’s Creed in Luther’s Small Catechism, I always ask if there is anything about it that they question or wonder about. The response is always the same, dead silence. Now, to be fair, maybe they genuinely don’t question anything in the Apostle’s Creed, maybe they are beyond wondering if all of it could really be true. But then I take a look at it again and think to myself, “Really? No one questions anything about this document?”

It can be very difficult to read it with new eyes. But imagine if you can, being a visitor here, who hasn’t been to church much til now. And before the visitor’s eyes is this creed that everyone begins to recite in unison. It starts off with, “I believe in God, the Father almighty, creator of heaven and earth.” Well, that’s simple enough. Other than the gender-exclusive language, no other issues there. It then continues with, “I believe in Jesus Christ, God’s only Son, our Lord, who was conceived by the Holy Spirit.” Hmmmm, and then the wondering begins. “Conceived.” “Conceived by the Holy Spirit.” I wonder what that means.

And then that wondering turns in to full-on questioning with that next line, “born of the virgin Mary.” What? Did everyone just say what I think they said? And you look at the printed text and sure enough, yep, everybody just said that Jesus’ mama never had sex before having him! Ain’t nobody had “the talk” with these people? You know, the birds and the bees? By this point you’re frantically trying to catch up, “suffered under Pontius Pilate.” Ok, “was crucified, died, and was buried”, pretty straightforward. “Descended to the dead”, whatever that means.

“On the third day he rose again…ascended into heaven.” Whoa, whoa, whoa. Wait a sec. Excuse me? Did they just say that Jesus was dead for three days and then pulled a Walking Dead on y’all? Ain’t nobody here ever seen a zombie movie? That ain’t nothing to mess around with people! But seriously, there is a lot to process in this creed that we just take for granted, and I’ve only gotten through half of it!

So, I’m still waiting for, one of these years, to have one of our new members in the Journey of Faith, when I ask, are you sure you don’t have any questions or wonderings about what’s in the Apostle’s Creed, to raise their hand and with all the courage they can muster, say, “You know what pastor, yes, some of this I’m just not sure about. Can we talk about the virgin birth? Risen after three days, give it to me straight pastor. Did that really happen?” Or anything else, they might be questioning. Because I fully believe, that it is in that questioning, in the wondering, that faith is strengthened and nurtured and allowed to grow like never before. Because the opposite of that, being too fearful, too intimidated, to ask, to wonder about such things—will kill faith faster than you can say three days.

So, by now you may be wondering why I’m talking about questioning and wondering. Well, there’s a phrase in our Gospel reading that really stood out to me. I read to you a resurrection appearance from the end of the Gospel of Luke. Jesus appears to his disciples and greets them with the words we use to each other during the passing of the peace, “Peace be with you.” He recognizes that they are terrified and so he goes on to try and convince them that it’s him, in the flesh, and not a ghost.

And then there is this curious phrase, “they were wondering and questioning in the midst of their happiness.” I found that beautifully odd. Odd because wondering and questioning things in my mind, is usually anything but a peaceful process. Usually, we wonder about things that don’t make sense. And it can be uncomfortable when things don’t make sense. We like things to make sense. We question things when we want answers about something. We like answers, and when we don’t have them, it can make us uneasy.

I find comfort in that because I fear, I question, I doubt, I wonder, I don’t always believe. And I’m banking on the fact that I’m not alone, that you can relate. But in the midst of all of that, in the midst of the fear and questioning, and doubt, and wonder, and unbelief, I hear Luke telling us that we can still find happiness there, that Jesus offers peace there, that Jesus shows up in that fear, and questioning, and doubting, and wondering, and unbelief. Happiness is not outside of all of that, but it’s where it’s found. 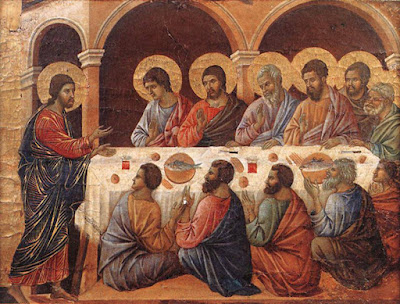 So, here is what I have been wondering about. Where does Jesus show up for us today? Where did Jesus point to, to prove that he was really there? His wounds. Jesus showed them his wounds and said, “It’s really me.” Jesus, shows up, in wounds. That’s where Jesus does his best work. In wounds. It is no accident that even after his resurrection, he still had his wounds. The cross was not behind him but would be a part of him forever. We follow a crucified God, so that God can show up in our wounds.

Now, Jesus is going to show up whether we are looking for Jesus or not. Because that’s just how much Jesus loves us. But if you want to go looking for Jesus, look for wounds. Where? Well, start with yourself. Start with your own wounds, no matter how old they are—bleeding, scabbed, or scarred—you’ll find Jesus there, pointing to those wounds, saying, “It’s really me.” Look at those around you—family, friends, church family—look at their wounds.

They may be very visible because they have shared their struggles with you, some, much harder to see. But you’ll find Jesus there. Saying, “It’s really me.” And then look outside your circle of family and friends and church family. Step outside your comfort zone, and look at the wounds of the strangers among us. And once again, you’ll find Jesus there. Saying, “It’s really me.” But I should also warn you, if you go looking for Jesus in wounds, Jesus may also ask, "You got anything to eat? Sit. Stay a while." Amen.