I love stories that don’t have a happy ending! I know, that might sound kind of weird but let me explain. I like stories without happy endings for at least two reasons, one of which I’ve known, and the other I’ve recently discovered. The first is because they seem to be more real, more authentic. We know that life isn’t about one happy ending after another and so stories without happy endings just seem to resonate with me more. I don’t feel like I’m being lied to by the storyteller. One of my favorite stories without a happy ending comes from a novel by Richard Adams called The Plague Dogs. You may know him as the author of Watership Down, a better-known work of his. But it’s actually the film version of the book that has the grim ending, that I like.

When Adams originally wrote the book, it did not have a happy ending but rather the ending that appears in the movie, but his editors would not pass it for publishing until he put a happy ending in it. Change his book or not get paid, those were his two choices. So he changed it. Oddly enough, when they made a movie out of it, he got the opportunity to put in his original ending and they did!

Now what’s doubly odd about that, is that the movie is an animated movie, leading many to believe it’s a family flick. Let me warn you now, in case any of you want to check it out sometime, it is not a family movie! Far from! But if you’re an animal lover, specifically a dog lover, and you don’t mind crying until you’ve run out of tears, then I highly recommend it! Now, I can’t give you any details because I wouldn’t want to ruin it for anyone, but that brings me to the other reason I like stories without happy endings.

They surprise me! You never see them coming! We’ve been trained to expect a happy ending at the end of every story. And when that doesn’t happen, it can be surprising, even a little jarring! And I love that in a story! I love when a story surprises me! What I hate, are stories that you can guess the plot, not long after the beginning of the story. If I can guess it, I don’t care how good the movie was, the storyteller failed in my book. I like to be kept guessing, and then to be shocked when the story lands in the most surprising of places. It’s also why I’m a fan of M. Night Shyamalan movies and the Twilight Zone. Those stories are full of twists and turns, you just never know where you’re headed! Maybe why I like roller coasters too now that I think about it, but I digress.

OK, what do unhappy endings, surprise plot lines, and twists have to do with anything today? Well, I’m glad you asked! Our reading from the Gospel of Mark that I just read a moment ago is the original ending of Mark. I say original because after Mark was done writing it, some didn’t like the way it ended. And so they added to the end of the book, creating a new ending. Much like Adam’s The Plague Dogs, they probably didn’t like the way the book ended. In this case, with the women fleeing in fear and dread, saying nothing to anyone.

Sometime when you’re bored, look at the ending of the Gospel of Mark. You’ll notice a section at the end that’s in brackets with a note saying that this was added later. And you can tell that it was added later even without that not because the first line in the added text is, “They promptly reported all of the young man’s instructions to those who were with Peter.” Completely contradicting the verse before.

But that’s not the twist ending I wanted to talk about. The surprise ending to the Gospel of Mark is the resurrection itself! We may not recognize it as such because we’ve been telling this story for 2000 years now. But think of hearing this story for the first time. A guy, a great guy, dies, and three days pass. Who would have guessed that he’d come back! Remember, this is pre-Game of Thrones and comic books, where when somebody dies you’re left to wonder, “Are they really dead or are they gonna come back someday?” No, Jesus is arrested, beaten, tortured, and then is executed in a most horrifying way, and they even check to see if he’s really dead. Jesus was as dead as dead could be. And then God provides the greatest surprise ending imaginable, the twist of all twist endings, and lo and behold, Jesus comes back! 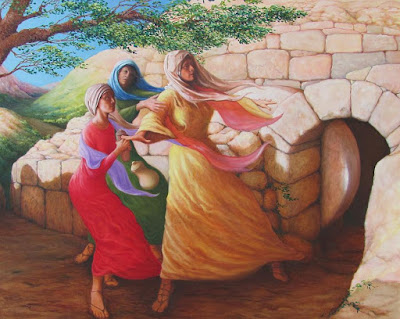 Now, I understand that may be hard to imagine, us being so far on this side of the cross and all, but think of it this way. The world believed in gods that demanded punishment for bad behavior, gods that were malicious, cruel, and played with humans as if they were toys—and don’t get me started on animal sacrifices to pay for your sins! So when Jesus dies, on account of people’s bad behavior, they would have totally expected God to say, “Well, that’s that! You had your chance with Jesus, and you killed him! Now he’s gone. End of story! Sucks to be you!” By the way, I do believe that God uses much worse language than that, and on a regular basis, especially when he’s watching the news, but I digress! That ending would have been totally believable to them! We failed, bye bye Jesus.

God saves Shadrach, Meshach, and Abednego from being burned after they were thrown into a raging furnace! What! Jesus is raised after being dead for three days! Didn’t see that coming!  We were expecting God’s judgment, anger, disappointment—you know, the “dad look.” Ask my girls about that look, they’ll tell you!

But we don’t get any of those, we get a risen Christ—back from the dead to save the world! Why, because God likes a surprise ending? Well, maybe. But even more than that God loves to love. And has been that way since the beginning of time. We just screw up that message of God’s unconditional love over and over. Why? Maybe because it’s hard to believe? Maybe because unconditional love is so hard for us, it’s difficult to wrap our heads around it.

But if the cross and empty tomb teach us anything it is this, God will stop at nothing, to love you. God will not let anyone get in the way, not even us. God will not allow anyone to write the end of the story. God will not allow us to edit it, to alter it, to amend it, to add to it, to slap on an ending that will sell better! No, this is God’s story, and God is sticking it to it! Now go share this story like you’ve just won the lottery! Can I get an amen? Alleluia!