I am the Model Shepherd

There are two translation issues in our Gospel reading for today that we have to deal with before anything else. They are issues that drastically change how we read and understand this text. Now, you know me, I’m not one to bore you with a bunch of Greek in my sermons but these just can’t be ignored. OK, here we go. This passage has always been known as The Good Shepherd. Jesus says, “I am the good shepherd.” But what if I told you, that’s not the best translation for that phrase!

Theologian R.E. Brown makes a convincing argument, well it’s convincing because he convinced me, that the Greek here shouldn’t be translated as “good shepherd”, but rather, a better translation would be “model” shepherd. Now I’m not going to get into how he got there, not because it’s boring but just because it’s quite lengthy. So Brown reads it this way: “I am the model shepherd. The model shepherd lays down his life for the sheep.”

“I am the model shepherd. I know my own sheep and they know me, just as the Father knows me and I know the Father. I take a stand for the sheep. I have other sheep that don’t belong to this sheep pen. I must lead them too. They will listen to my voice and there will be one flock, with one shepherd. “This is why the Father loves me: I take a stand so that I can take it again. No one takes that from me, but I do it because I want to. I have the right to make a stand, and I have the right to do it again. I received this commandment from my Father.”

A very different reading isn’t it? It’s still about a shepherd and the shepherd’s sheep, but instead of being about a good shepherd, it’s about a model shepherd. What was once implicit, us following Jesus’ example, becomes explicit. And now the focus is no longer on dying for the sheep, but on taking a stand for the sheep. Which makes much more logical sense anyway because if you think about it, the death of the shepherd would spell certain doom for rest of the sheep, who would then have no one to protect them.

To be clear though, death is not completely removed from this analogy. Let us not forget the wolf! The way we see the shepherd may have changed, but the wolf is still the wolf. And we all know, the only job of a wolf, in any story, is to attack, to kill. When Jesus speaks of the model shepherd standing up for the sheep, the shepherd does so at great risk, up to the shepherd’s own life. 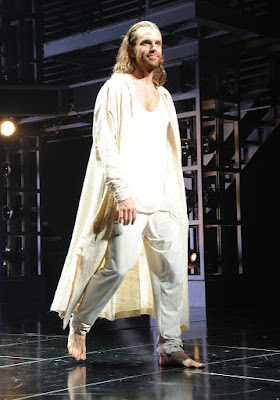 So what does all this mean for us? Well, I should start out by saying, in the same way that God is God and we are not, so it is that Jesus is the Christ, and we are not. Likewise, Jesus is the model shepherd, and we are not. I say this because it is impossible for us to be a shepherd just like Jesus, and Jesus doesn’t expect us to. That’s why he calls himself the model. In the same way that a runway model is often seen as an unrealistic image of perfection that we then scramble to emulate. The idea here is not perfection. But merely following the lead of the model shepherd. And that is the call of all of us who claim to follow Jesus, to be little shepherds, all of us, not just pastors or youth directors or council presidents. All of us—little shepherds emulating the model shepherd.

And the people that we are called to serve, should be treated as if they were one from our own sheep pen. Because something else we know about the model shepherd from this passage is that the model shepherd has sheep everywhere out in the world. This is not the model shepherd’s only sheep pen—which, I think was just a nice way of saying that we are not as special as we like to think we are. And if Christ feels a responsibility to all those other sheep out there that are not of this pen, then we should probably too. If, we are to take this emulating the model shepherd business seriously.

I want to end though where we began, that Christ is the model shepherd, and we are not. If it weren’t for Christ than none of this would be possible. Jesus, the model shepherd, is the Christ of yesterday, today, and tomorrow. And that’s a claim that none of us little shepherds can make. It all begins and ends with Jesus. Our passage from the Gospel of John ends on a very commanding, powerful note. You can almost see Jesus, straighten his tunic, and stand tall as he says, “I take a stand so that I can take it again. No one takes that from me, but I do it because I want to.” And Jesus always wants to. Jesus never tires of standing up for those who can’t for themselves. Another claim that none of us sheep can make. Our legs get tired of standing. Our feet grow weary of marching. We are not always willing and able to stand up for others. Thankfully, Christ always is. Amen.