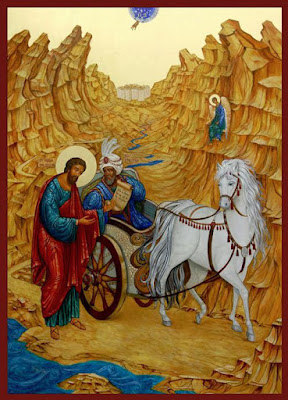 What a fascinating story we have today from Acts! The story takes place after Jesus’ is raised from the dead and goes back to heaven. Jesus followers who are left behind are then given a mission to spread the good news, the gospel, to the ends of the Earth. And the book of Acts is basically the beginning of that work. Jesus followers spread out in different directions sharing the good news of God’s unconditional love. And in this reading, we get a story about what Phillip is up to.

Phillip was headed in the direction of Gaza from Jerusalem when he encounters an African man on the same road that he’s on. Unfortunately, we don’t know the African man’s name but we do know he was from Ethiopia and that he was a eunuch. Now, I hope I don’t need to go into too much detail about what a eunuch was, especially with their being children in the pews and all, but let’s just say that he was sexually ambiguous. And that’ll be important to know here in a minute, but let’s continue with the story for now.

So, Phillip meets this Ethiopian eunuch on the road to Gaza and overhears him reading the Bible, which at the time only contained the Hebrew scriptures, what came to be known as the Old Testament. Phillip asks him, “Do you really understand what you are reading?” And the man says, “Without someone to guide me, how could I?” Then they sit together and discuss the Bible passage that he was reading. Unfortunately, we don’t know all that was said.

Let’s start with why. A few weeks ago, I was invited to speak on a panel of religious leaders at a PFLAG meeting. For those of you who don’t know, PFLAG stands for Parents, families, and friends of Lesbians and Gays, and was founded in 1973 to work towards inclusivity and equality for the LGBTQ community. So their Placer County chapter asked me to be on this panel and it was fascinating and a great experience for me and hopefully for them too. But maybe the most engaging time was after it was over, when I mingled with the group over a few cookies.

One person, in particular, came up to me and thanked me for being there. She was transgendered and the more and more we talked, she finally stopped me and said, “Wait a second, you mean that I could come to your church and I’d be welcome?” Trying not to get choked up by the fact that she would even have to wonder that, I said, “Of course, why not?” “Well”, she said, “because of this! This might be a lot for them to handle!” As she pointed to her outward appearance.

For so many people in our world, for so many different reasons, they don’t see church as being for them, as being a place that would welcome them, that would accept them just the way they are, that would be comfortable around them. Just like the Ethiopian that Phillip sat and talked with. Because of his status as a eunuch, he was an outsider. Yes, he was given a high-level job in the queen’s court but he was not one of them I guarantee you! He was less than, even according to the Bible, which clearly states that no eunuch could worship in the temple.

But, then he hears the gospel, the good news of Jesus, from Phillip. And after that conversation, what does he conclude? That this good news is for him! It includes him! I don’t know what Phillip said to him exactly, but whatever it was, it caused that Ethiopian eunuch to feel included, welcome, maybe for the first time, and looking for water to be baptized in. I don’t know how you personally define the gospel, the good news, but if how we share the good news with others, does not cause them to immediately conclude that this good news is for them, then we are doing it wrong. Because it’s for everyone my friends, no matter what.

So that’s the why. Why was this man able to ask “What would keep me from being baptized?” Because Phillip shared the good news in such a way that made him think, this is for me! But how was he able to ask this. From a practical standpoint, remember they are riding down a road to Gaza. I mean, think about driving to, I don’t know, Cool. It’s a beautiful drive to Cool but there’s not a whole lot between here and there right? Which is what makes it such a beautiful drive!

So you’re driving to Cool and someone in the car looks out the window and says, “What would keep me from being baptized?” Think of the list of reasons that would go through your head as to why we can’t just pull over and have a baptism. There’s no church! There’s no baptismal font! There’s no pastor! Grandma’s not here! The list of reasons why this is a ridiculous idea would go on and on in your head, as you look out the window as your passing over the American River.

How was that Ethiopian man able to ask, “What would keep me from being baptized?” Because he had a “Why not” attitude! Why not! He looked at Phillip and said, “Why not!” He didn’t see any reason why his baptism couldn’t happen right then and there! He just heard the good news from Phillip and thought, not only is this good news for me, but it’s also for right now, in spite of any challenge that may be present! This is one of the biggest challenges that churches face today. Always with us is what cannot be done. What we don’t have. What we can’t do. What we are not.

Rather than what can be done, what we do have, what we can do, and what we are! We humans can be our own worst enemy! Put your feet in the shoes of a leader, and this is not hard for many of you because many of you are leaders and can relate to what I’m about to say. Now imagine throwing out ideas to the group you are trying to lead, and every time all you get is a laundry list of reasons why we can’t do them. It’s not going to take long before you just stop throwing out ideas right? But now imagine throwing out an idea, and hearing “Why not!”

Why not! Not with a question mark but with an exclamation point! Why not! Let’s give it a shot! As a leader that’d be music to your ears right? Now, I understand that it’s not as simple as that. There has to be a certain level of trust, a certain level of respect, a certain level of love, courage, faith. But none of that stuff is even necessary unless we first come to a challenge like that Ethiopian, and exclaim “Why not!” If you want a real-life demonstration of this sometime, throw out an idea to any one of our staff, Callan, Jeff, Owen, or Lisa. I cannot remember the last time I heard them say no to an idea. You will always hear from them, “Why not! Let’s try it! Let’s give it a shot!” Which is why they are such incredible staff. Thank God for them.

Let us pray. God of endless possibilities and opportunities, we thank you for never tiring of our unwillingness to try something out of the ordinary. Open our hearts. Open our minds. Give us the courage, faith, trust, respect, and hope, to say why not, exclamation point! Can I get an amen? Amen!