The Transformative Power of the Gospel

So, before we get into what is yet another challenging text from the Gospel of John, I want to take a moment and talk about the gospel. Not the Gospel of John, or any one in particular, but about the lower case g gospel, the gospel in general. From some recent conversations I’ve had with some of you over the past month or so, I feel like we need a refresher, a primer, of what exactly the gospel is. Many definitions and ways of describing it have been offered over the last two millennia. Because depending on the Christian scripture you are reading, you’ll get different views from different authors. So, in my own words, I define the gospel this way: Christ died and was raised for the sake of the world, so that we can die and rise with Christ, today, for the sake of the world.

Now the first part of that, Christ died and was raised, is pretty common among various theologies, but it’s where I think many of us stop. Christ died and was raised and now everything is going to be ok! Now let’s celebrate! And there’s certainly a time and place for that. Christ’s death and resurrection is certainly worthy of celebrating! But that’s only half the gospel, and we do a disservice to the gospel, to ourselves, to the world, and to Christ, if we allow ourselves to stop there. Not to mention the fact that stopping there, would not be true to our identity as Lutherans. For you see, the gospel is in its truest, most complete form, when it is allowed to become ingrained and alive in our hearts and minds.

The gospel is incomplete without you. It does not exist in a vacuum. It does not exist as a concept in a seminary textbook. If the gospel ceases to do its work on us, if it ceases to transform our hearts and minds, if it ceases to change our hearts and minds, then it ceases to exist. It’s like that age old question, “Does a falling tree make a sound in the forest if no one is there to hear it?” I’m guessing Jesus would say, “Who cares?” Because the fact that no one is there, is more of a concern than if it makes a sound or not! Jesus did not fall and rise for nothing. Jesus fell and rose to transform, to change, your hearts and lives for the sake of the world.

And that’s why these Gospel readings during the season of Lent are so challenging! Lent asks us point blank, how we are doing with that! “How open have we been to the transformative power of the gospel?” That’s a hard question! Because nobody likes constructive criticism! Some of you may be better at taking it than others but nobody really likes it! We may appreciate the benefits of constructive criticism, but when we are receiving it, uh uh, no way, it sucks! Forget that. Take our Gospel reading for today. Some people came up to Jesus’ followers with this simple, benign request, “We want to see Jesus.” And then Jesus, out of nowhere, launches into yet another monologue about falling seeds, and death, and hating our lives. And by the end of the story we don’t even find out if they ever got to see Jesus or not!

Now, to be fair, this story takes place right after the events of Palm Sunday in John’s Gospel. Which, I know, is kind of weird because next Sunday is Palm Sunday. It’s one of the weaknesses of this lectionary, it jumps around the timeline a bit and doesn’t always line up well with our church year. But aside from that, tensions are heightening at this point in John’s Gospel. Jesus just rode in to Jerusalem, being hailed as the king of the Jews, which both the political and religious leadership did not take too kindly to. Jesus’ end was near, his days were numbered. Which probably explains his mood, as well as all this talk about death and dying and hate. 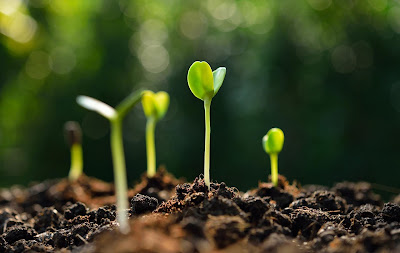 But behind all of that, is this same call of the gospel, to be transformed, by dying to oneself, and rising into something altogether new. In this scene Jesus uses the image of a seed to convey this message once again. He says that if a seed doesn’t fall into the earth and dies, it remains just a seed. But when a seed falls into the earth and dies, it sprouts and grows and becomes something altogether new. It ceases to be what it once was, a seed, ultimately bearing nourishing fruit. And he’s not just foreshadowing his own death and resurrection here because he goes on to say that whoever loves their life will lose it, and whoever hates their life will save it.

Now, this isn’t calling us to be a bunch of self-deprecating people with low self-esteems. But rather, it points back to what Jesus was just talking about, allowing ourselves to be transformed by the power of the gospel. Those who, as Jesus puts it, “love their lives”, are those of us who resist being changed, who resist being transformed, those who think, “I’m fine just the way I am!” They are the seeds that don’t fall into the earth to sprout and grow and bear fruit. They stay right where they are, becoming stale, and stagnant. That is not what Jesus fell for, that is not what Jesus died for.

With all that being said, I also find hope and comfort in this passage. After Jesus is finished talking about seeds dying and loving or hating one’s life, he says, “I’m deeply troubled. What should I say? ‘Father, save me from this time?’ No, for this is the reason I have come to this time.” In the midst of all the anguish Jesus must have been going through, the stress, the anxiety, the fear, as his end came closer and closer, he did not stray from his course.

Jesus was unrelenting, Jesus was unwavering, Jesus was committed as ever to his mission of salvation of the whole world! I find comfort and hope in that like no other. For I know how I can waver, how I can relent, how I can stray. I know how I resist being transformed. I know how I fight change. I know how I would rather stay safe and secure in the familiar. And so, it is comforting to know, that the one that we follow, is relentless in God’s commitment to us—no matter what. Thanks be to God. Amen.