Welcome to Holy Week. Each year we begin this most holy time of the church year with Palm Sunday, which always feels a bit juxtaposed with the rest of the season of Lent. In the midst of the heaviness of the season, Palm Sunday always takes on a different tone. In spite of the events that we will be remembering on Maundy Thursday and Good Friday, Palm Sunday takes on a more celebratory tone, one might even say a victorious tone, what with the reading of Jesus triumphal entry into Jerusalem, riding in like royalty, with shouts of Hosanna in the air.

It’s almost enough to make you forget it’s Holy Week! Almost. For me it’s a welcome respite, from all those challenging Gospel readings throughout Lent, that have been hounding us for weeks now. Today we get to take one, last, deep, breath, before submerging ourselves in the holiness of this coming week. I hope you will all join us for The Three Days. If you don’t drive at night, it’ll be worth getting a ride. If you know of someone who doesn’t drive at night, be proactive and offer them a ride! Again, it’ll be worth it.

But let’s not get ahead of ourselves! Today is Palm Sunday! And we have some very beautiful stories before us today from the Gospel of Mark. Outside we read the story of Jesus riding a colt into Jerusalem, a very royal thing to do in those days. People laid their clothes on the ground before him, as well as branches, to make a sort of red carpet for Jesus, shouting “Blessed is the one who comes in the name of the Lord. Hosanna in the highest!”

From there we moved on to another reading from Mark that I just read a moment ago. While some corrupt religious leaders plan to arrest and kill Jesus, he is having dinner at a sick man’s house, and a woman anoints him with some very expensive perfume, which made a few people angry. And the story ends with Jesus giving his followers some very specific instructions regarding the upcoming Passover meal, which we will continue on Maundy Thursday.

I noticed a common thread that ran through all of these scenes in our Gospel readings, both the one we read outside and here. And that thread could be summed up in one word: prepared. Outside our reading began with Jesus giving his followers instructions on how to prepare for his arrival into Jerusalem: where to find the colt and how to go about acquiring it. Then, from our reading inside, the religious leaders are preparing for a calculated attack on Jesus.

Meanwhile, after Jesus is anointed by that unnamed woman, and some argue that the perfume could have been sold on behalf of the poor, Jesus corrects them and tells them that she has prepared his body for burial ahead of time. Then Judas begins to prepare to turn Jesus in to the authorities after being paid by those same corrupt religious leaders. And lastly, Jesus tells his followers how to prepare for the upcoming Passover celebration. There is lots of preparing going on throughout our Gospel readings today. 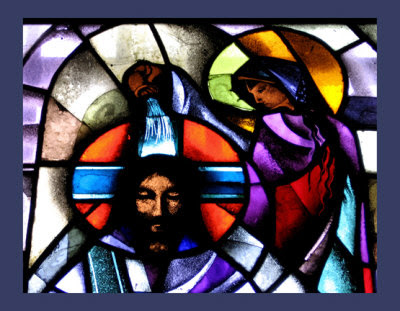 The one that really stood out for me, is the unnamed woman and her perfume that she anoints Jesus with, and the connection that he makes between that and his burial. I’m guessing that not even she knew that that’s what she was doing. She certainly understood who Jesus was, why else would she spend so much money on this moment. But preparing him for burial, while he’s still alive? I don’t think anyone would have understood that! In that day, it was common to anoint the body with strong perfumes.

This served the practical purpose of masking the smell of the initial stages of decomposition, especially for the sake of visiting mourners. However, it also became a way of honoring and caring for the dead, or in this case, the soon to be dead. I find her anointing of Jesus body ahead of time, to be very moving. Moving because she was able to have this moment with Jesus, to care for and prepare him, before he died—an opportunity that many of us have felt we didn’t get with our loved ones who have died.

But maybe that’s not entirely true. What if all our interactions with our loved ones are, in some way, in preparation for death, both yours and theirs! Bear with me on this one. Just in the two years I have been your pastor, I have had multiple conversations with people who were dying, who were so comfortable with the idea of death, so comfortable with their own looming death, so much so, that in some cases, it left very little for me to do as their pastor! Some people, are just so prepared for the end. And I don’t mean prepared in the sense that they are just tired of living, or that they are in so much pain that they just want it to end. No, I’m talking about people who really are at ease with death. And I’ve seen this in adults of all ages, not just the elderly or the dying. They have no fear, no worries, when their time comes, their time comes.

This story about the unnamed woman anointing Jesus ahead of time, has me wondering, how do people get like that? How do people get to a point in their life when they are comfortable with their own mortality? This story has me thinking that there must have been people in their lives, that have somehow, helped to prepare them, helped to foster this sense of peace with death. Maybe it was in the way that they were cared for throughout their lives, the way that they were loved, the way that they were taught the promises of God’s unconditional love. I don’t know, your guess is as good as mine! I’ve never asked them. But I think it’s going to be something I start asking those people, because I think it’s a healthy state of being that we could use more of. And I think it’s something that we could be more proactive about.

But I have too many conversations with people, who are dying, that are of the opposite nature. People who have not found that comfort with death, people who are filled with fears and worries at the end. And I can’t help but wonder, how they got there. And more importantly, what might have helped them, throughout their life, to find peace. I don’t have all the answers. I’ll admit that this is a new thought process for me, inspired by todays Gospel readings. But I think it’s something worthy of our exploration and conversation around. Because God’s promise of unconditional love is meant to bring hope and comfort, to alleviate fear and worry, and not just for the dying, but for all of us. May the holiness of this week bring you blessings upon blessings as we journey through The Three Days together. Amen.