When I was growing up, you just did what you were told. Saying no, when asked to do something, especially by a parent, was not an option. We were too scared to say no! I wasn’t physically abused as a child or anything but I knew enough to not test it! Although, I was a big baby. All my dad had to do was give me that look, you know the dad look, and I’d run off crying to my room! I have no idea why I was scared to death of him. But I was, and maybe still am, just a little, and so I never thought to say no to him or my mom. Telling them that I didn’t want to do whatever it was that they were telling me to do, was just not an option. And I’m not sure that was all that healthy for our relationship.

My own daughters and I have a very different kind of relationship than what I had with my parents. They talk to me in ways that I know my parents would think is disrespectful. My kids are quick to let me know how they feel about whatever it is I’m asking them to do. You should see my parents when we go to visit them each summer. I swear they acquire this temporary nervous tic as they see me parent very differently than they did and to their credit, they usually don’t say anything. And maybe that’s because my kids are turning out even better than I did. It’s hard to argue with those kinds of results. And I know they’re afraid of me as much as any kid is afraid of a parent. But I guarantee you they are not as afraid of me as I am, I mean, as I was, of my dad!

Our Gospel reading for today begins with Jesus getting into a little bit of a spat with some Jewish leaders, centering around authority. What kind of authority does Jesus have and where does it come from? That’s what they wanted to know. Well, that and they want to trick him into saying something illegal. He ends up answering their question with a question, an annoying habit of his. And he flat out tells them no, I won’t tell you where my authority comes from. Despite sounding a bit childish, if you read between the lines, he does answer their question, just not directly. And they weren’t dumb, they knew that. But before they could even respond, he tells them this short parable about a father and his two sons. 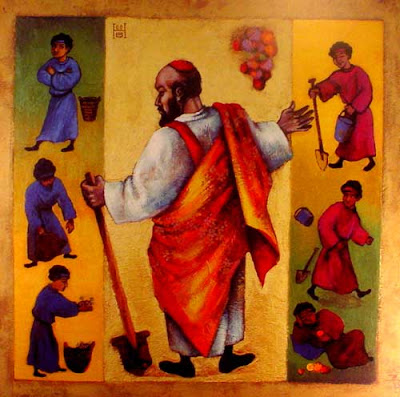 He tells both of them to go and work in the vineyard. The first one says no. And every time I read this I always expect the father to throw the kid out on the street. Or at least give him a good biblical backhand across the mouth. That’s the way I would have told it, thankfully I am not the messiah. Because instead, the father seems to ignore the response and the son ends up doing what the father asked anyway. Now the second son, this is one of those kids that is probably spoiled because he puts on a good show and is seemingly respectful and obedient, but ends up not doing what he was told in spite of the fact that he said he would. “Yes sir” was his response when told to go work in the vineyard with his brother. But his “yes sir” wasn’t worth a whole lot in the end.

At its heart, this parable is about hypocrisy. Jesus was making a point to the Jewish leaders, that he was just arguing with, about how their actions were not lining up with their words. Now, I could stand up here and give you a sermon about not being hypocrites—using phrases like: walk the walk, or practice what you preach, or actions speak louder than words. But we already know that right? We all know that being a bunch of hypocrites is bad! And at the end of the day we’re all going to go home as hypocrites anyway right, no matter what I say up here? Because…human. So I want to take a different approach and see how we land.

I want to know why the first son said no. And what motivated him to obey in the end? The story doesn’t say does it? Well, that doesn’t mean we can’t have fun speculating! I think there are a couple reasons he may have said no. One, because he didn’t want to! He didn’t feel like working that day. Maybe it was as simple as that. It was a knee-jerk response that he regretted as it was coming out of his mouth. Or, maybe there was more intentionality to it.

Maybe, he wanted his father to know just how much he didn’t want to work in the vineyard that day. And maybe he intended to do it all along but in that small act of defiance he was trying to communicate something to his father. And I don’t know what I love more, the fact that this son was comfortable enough to be so bold with his father, or that his father simply took it in stride. I think that speaks volumes about their relationship.

So why did he obey anyway, in spite of his little act of defiance? Well, I think there are a few possibilities here too. One might be, fear and self-preservation. Maybe he would have ended up getting that biblical backhand across the mouth if he tried to return home after not doing what he was told. Maybe he would have gotten kicked to the curb! Or two, maybe he obeyed out of respect. Maybe he realized he had too much respect for his father to not to as he was told.

Or maybe it was guilt, it’s a powerful motivator. Churches are experts at that one! Here’s another option. He did it out of a sense of duty. I like this one the best, maybe because I can relate to it. I’ve mentioned before that my own dad instilled a strong sense of duty in me. And I think somewhere along the way, the church has lost this aspect of our faith.

Sometimes, as my dad would say, you just gotta do what your told, whether you like it or not. Period. I try to instill this in my own girls. Because as we adults know, it never ends does it! Right now for them it’s school and homework and teachers they don’t like. But before they know it, it’s gonna be a job they don’t care for or a boss they can’t stand. And at the end of the day you still gotta just do what your told to do. I treat my journey of faith the same way.

Why do I do these things anyway? No, it’s not to get a paycheck. I’m not sharing this with you as your pastor but as a fellow baptized child of God. Trust me, I’ve always had these issues, long before I was a pastor. Now, some days I can convince myself with some very logical reasons about why I should just put on my big boy pants and do what I know I should do.

Reasons like, it’ll be good for me, or people are depending on me, or I’ve got to be a good example, and the like. And then there are those other days, when I do these things anyway, out of a raw sense of duty and commitment. Not because I want to, or because I feel like it, but because I’ve been instructed to do these things of faith. And thanks to my dad, I know how to follow orders. And so I do them.

And here’s what I love most about this whole aspect of our faith journeys. We can be as open and honest with God as we want. God can handle it. If I as a dad can choose my own battles wisely, how much more can our God? We can tell God we don’t want to do what God is asking! Think of how many Bible characters did just that! We can tell God things like, “Oh shut up Lord, I know, I know, I hear you.” Or, “I’m going, I’m going. Get off my back!” God can take it. God invites it. God doesn’t want you to hide those feelings! God wants you to lean into them. Especially because, loving others, even when you don’t feel like loving them, is the deepest, most holy kind of love there is. Thanks be to God. Amen.