It Happened On Our Watch

At the house that I grew up in, we had a grapevine in the backyard. We brought it from my Grandpa’s house in Colorado one year after visiting him when I was very young. We planted it on the side of the house and it grew very fast. We took care of it every year, pruning it, and watering it and using fertilizer. My dad even installed a cable that stretched the entire length of the fence that it grew near so that the vine would have something to hold on to as it grew each year.

Every year we’d say, I think this is the year. This is the year that we get those sweet juicy grapes that Grandpa gets every year. But that year never came. Oh it produced grapes every year, tons of em! But sour! Make your eyes shrivel! But that didn’t stop us from caring for that darned grapevine, year in and year out, always thinking, this is gonna be the year.

The parable that Jesus tells in our Gospel reading for today occurs in a vineyard. It’s a common setting for stories in the Bible, as you may have noticed, as it is also the setting for our story from Isaiah, a very similar story to the one that Jesus tells. However, there is a fundamental difference between the two. In Isaiah, the vineyard is what is under scrutiny. The vineyard is what is deemed as faulty and under judgement. However, in Jesus’ story that he tells, it’s not the vineyard that’s faulty. It’s the cultivators, the caretakers, the tenants that are renting the vineyard, that are under judgement. But before we even go there let’s take a look at the vineyard herself because Jesus gives us a few details to consider.

First, Jesus tells us, “There was a landowner who planted a vineyard.” This tells us two things, this vineyard is owned by someone, and that someone planted it. So right from the word go, this landowner is personally involved. Next he says that “he put a fence around it.” Why would someone put a fence around a vineyard? To protect it, from animals, people, from getting trampled on.

Next Jesus tells us that he “dug a winepress in it.” Now, mind you, he just planted this vineyard, and there was no guarantee it would yield good fruit, why would he install a winepress so soon? Because the landowner had confidence in his vineyard. There was no question in his mind about whether or not he would need that winepress. He had hope.

Next he builds a tower. And what’s the tower for? Not to enjoy amazing countryside vistas. It was to keep watch over the vineyard. Not only was he hopeful in its success, he planned for it to be watched over, even if not by himself. This vineyard was planted with a lot of forethought and planning. It was planned with protection, and hope, and continued care—which sounds an awful lot like love.

And lastly, he rents it out to some tenant farmers to cultivate the fruit that he is so sure he will enjoy. So, that’s the what, how, and why of the vineyard. Question is, who is the vineyard? And I say that with caution because we don’t want to over-allegorize this parable or any parable for that matter. Sometimes a parable is just a parable. Not everything has to represent something else. But here’s why I bring this up. 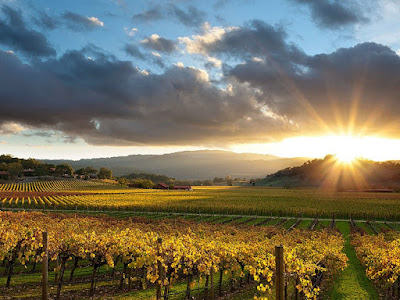 Think of this as Jesus way of saying, don’t be like these cultivators, be better than this. Think of it as Matthew’s way of saying; don’t be like the chief priests and Pharisees, you can do better than that! Which leaves us with the most important question, if we are called to be cultivators in the vineyard that is God’s world, then what are we called to cultivate? What is the fruit that God has called us to cultivate in others?

Well, ask yourself this, what have others cultivated in you? What good fruit have your family, friends, church family, cultivated in you over the years? Kindness? The will to love the unlovable? Care for the poor? Care for those who are less privileged than you? A desire to feed the hungry? Clothe the naked? Visit the sick? Care for the mentally ill? Welcome the stranger? The courage to place others before yourself? Are not these the things that we are called to cultivate in others? But before we can cultivate any of those things in others, before we can pass on the things that have been cultivated in us, we first have to acknowledge who and where the vineyard is.

Because if we only see the vineyard is us, as the church, then this world is never going to get any better, this world is going to continue to struggle, the gap between the rich and poor will continue to widen, the wage gap between men and women will not narrow, race based hate and violence will not go away, the LGBTQ community will not feel welcome here, and people will continue to wreak havoc on innocent lives as happened in Las Vegas on Sunday. Pastor, how do get from cultivating the vineyard to a mass shooting in Las Vegas? Because Stephen Paddock was in our vineyard! That happened on our watch! As we sat in the tower that God built for us to watch over the vineyard that God has placed us in!

I led the Bible study for our high school youth on Tuesday. We are going through the major stories of the Bible and that night we took a look at the story of Cain and Abel, the first murder in the Bible. We had a great discussion, they are so much wiser than I was at that age, and much more compassionate. They did not talk about how horrible Cain’s crime was. They did not ask if he was going to hell for that. They wanted to know about his life.

They wanted to know about his childhood. They noticed that in one verse he was born and the next verse he was a farmer. And so they wondered, what had he gone through in his life that made him choose to take his brother’s life? They did not judge him, all they could muster was compassion for him. If our youth are any indication of what the future holds for us, then there truly is reason to hope.

The problem with the tenant farmers, the cultivators in the parable, was that they were cultivating for themselves, as if the vineyard belonged to them. It did not. It does not. We are called to be cultivators of good fruit in God’s vineyard that we have been placed in. We are called to care for the vineyard as if it was our own, remembering that it is not. Like my grapevine growing up, fruit will come no matter what. Will it be sweet or sour is the question.

The kind of fruit that we cultivate is based on how well we have tended the vineyard. Should we feel directly responsible for a mass shooting that occurred 600 miles away? I don’t know if I’m saying that. I honestly don’t know if I’m not saying that either. But I do know this, asking why we are responsible for the shooting in Las Vegas is the wrong question to be asking.

Stephen Paddock was one of our own, in God’s vineyard that we are called to tend. And the next Stephen Paddock will be one of our own. And there will be a next one. Trouble is, we don’t know who the next one will be. Will we wait until the next one is in our backyard before we claim some degree of responsibility? Or might we take a more proactive stance? We may not be able to predict who the next shooter may be.

But what we can do is double our cultivating efforts, double down on our call to be cultivators of good fruit in the vineyard that God has placed us. And more importantly, recognize that wherever we are: work, school, the grocery store, the gas station, a meeting, wherever we are, we are in the vineyard. And we are called to tend it well, because God never gives up on the vineyard. Thanks be to God. Amen.