“Give to Caesar what belongs to Caesar and to God what belongs to God.” That is a loaded phrase if there ever was one, especially these days we are living in now. And it’s a phrase that means different things to different people. Some hear that phrase and think of the separation of church and state. Aside from the fact that many Americans don’t really understand what the separation of church and state even means, that is not what Jesus is talking about here.

Others hear Jesus words and think of money, either in the form of taxes or tithing or both. And after all, money is the illustration that Jesus is using here so it’s easy to see why people would think this is about money. However, money is just the illustration that Jesus is using to teach a lesson. This really isn’t about money, no more than it’s about the separation of church and state.

So, what is it about? Well, it could be about a few different things. One path that many preachers will go down today is loyalty. There will be many a sermon about our divided loyalties. And I think they’d be right! That will make for many fine sermons, and it’s a path I’ll probably take some day when this Bible story comes around again. But not today. That’s just not where my head and heart was at this past week.

It is not a president of the United States. I don’t think that is an accurate comparison. As much as presidents might like to think they have that much power, thankfully they do not. That’s why every president has not been able to do all the things they campaigned on, or as quickly as they would have liked. Why? Because of the checks and balances that are in place over each of branches of government, to ensure that no one branch has too much power.

Caesar was an emperor, and therefore had the kind of power that U.S. presidents could only dream of. So, to think of a U.S. president when we hear Jesus say “give to Caesar” is not quite accurate. I think the closest thing we can come to is to compare it to the entire U.S. government, all three branches together.

So, what if we heard it this way, give to the government what belongs to the government, and to God what belongs to God. At least for the purpose of this sermon, let’s work with that. Now I mentioned that we usually think those things are different, and we wouldn’t be wrong. There are things that we give to one and not the other, or at least shouldn’t. For instance, worship. I think we can all agree that we should worship God, but not our country. However, I do think we can easily slip into the worship of country and could have easily wrote a sermon on that but not today. And just to be fair, I also think that we can easily slip into worshiping worship rather than God at church, but again, we won’t go there today.

Our spiritual well-being might be another thing that we give to God, but probably would not give to our government. I think most of us would agree that our spiritual well-being is the responsibility of religion and family, not the government. So, there are various things we would give one and not the other. But as I sat at my kitchen table and thought about this, I could name way more things that we give to both than things that we only give to one or the other.

Love—I love God and I love my country. Respect—I respect God and I respect my government, keeping in mind of course that respect is earned. Loyalty, both God and government ask for our loyalty, meaning we try to refrain from being blasphemous and treasonous. Money—I give money to God and to the government. 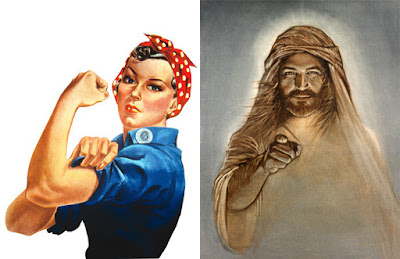 This time, when I heard Jesus say, “Give to Caesar what belongs to Caesar and to God what belongs to God” I heard Jesus calling us to participate in both. I did not hear Jesus pitting one against the other! So what does that look like? What does it look like to participate in our government? Well, mentioned taxes. But that’s not really a choice is it? Well, I guess I could decide to not pay my taxes but that wouldn’t end well for me would it? How about voting? That’s a choice. We are not threatened with legal action to vote the way we are to pay our taxes. But voting is easy! I mean, is that really how we are called to participate in our government? For me, that’s the absolute, very least we can do.

There are so many other ways that we can participate, that I know many of you  are already doing: call or write a politician; attend a rally; protest; use social media to spread positive messages of change; attend a city council meeting; speak up for those who have a less of a voice; stand up for those who cannot stand for themselves; be creative! There are so many ways we can participate in the active work of our government. And being critical of our government is participating. Holding our government accountable is participating. Because no person or body of people should have power go unchecked. However you want to participate is great as long as we are participating, otherwise death is inevitable.

Now, how can we answer the call to participate at church? Like taxes, it’s not enough to just throw money in the offering plate…but please don’t stop doing that! Our treasurer’s heart skips a beat every time I say things like that! And like voting, it’s not enough to just show up at the annual congregational meetings. But regular participation, in a variety of ways, is what we are called to: Sunday worship; attending Bible studies, serving the community like at the Gathering Inn or the annual Christmas dinner, helping with the children or youth, just to name a few opportunities. Do you want the church to do more? Well make it happen! Or at the very least, inspire others to help make it happen! Maybe it’ll work. Maybe it won’t. But I can guarantee you this, complaining and griping about it will not inspire anyone to do anything new around here.