A few weeks ago I was putting a new key on my wife’s keychain for her and I noticed a key that I wasn’t familiar with. So I asked her. “What’s this key for?” She looked at it and said, “I don’t know.” Now, she doesn’t have that many keys on her key chain! It’s not like she’s a prison guard who has to keep track of fifty different keys! But I thought, remain calm, don’t say anything stupid. So I said, “How can you not know what this key is for on your own key chain!” Well, that didn’t last long. Apparently, “Don’t say something stupid.” Only lasted from the time I thought that to the opening of my mouth! She didn’t respond. Because she’s much wiser and has more self-control than I do. So I stand there and look at this key and realize that it does look vaguely familiar.

And then it dawns on me, that it’s one of the house keys that were given to us when we moved to our current house. Now you might be thinking, “They haven’t lived there that long, and how could he not recognize one of the house keys anyway?” Or, “Wow, he ain’t lying when he says he has a bad memory! Maybe he should see a doctor about that!” Well, that may be true but, that’s not why I didn’t recognize that key. I didn’t recognize that key because we never used it. You see, when we moved there, the property management company gave us two keys. One for the front door, and one for the garage door. But, only one of them worked! The one for the front door worked but the other one didn’t work on any other lock in the house! And we never took it off our keychain so there it sat, unused, and forgotten.

In our Gospel story for today, Jesus has this profound conversation with his disciples where he makes this connection between who Jesus is and the “keys of the kingdom of heaven.” Peter says, “You are the Christ. The Son of the living God.” Let’s pause there for a moment and consider what that means. For our Gospel writer Matthew, this was more than just a title. This was about more than what Jesus is. This was about who Jesus is.

And what is the one thing that Matthew wants you to take home after reading his gospel about Jesus? That he is Emmanuel, God with us. And how does Matthew communicate what that means to us? With story after story of Jesus preaching, teaching, healing, feeding, comforting, welcoming, forgiving, and loving God’s people. Jesus is Emmanuel, God with us, and this is what that looks like.

This story comes in chapter 16 of Matthew’s gospel, more than half way through, so these disciples have seen and heard a lot already! They have seen first-hand what it means to follow the Christ, the Son of the living God, Emmanuel, God with us. And by follow I don’t mean just physically follow him around, but follow him in practice, in action, in everyday life. And I’m thinking that by this time, in their journey with Jesus, they are beginning to realize that this is more than just a new way of believing, but that this was a new way of living. What Jesus was teaching and demonstrating was more than just a new way of thinking about God or the scriptures or their people. But that following Jesus also meant a change of heart, and that change of heart was going to have life-changing ramifications.

Ok, now with all that in mind, who Jesus is, and what that means for those who claim to followers of him, he moves right into what is known as the office of the keys. I know, that sounds so formal, the office of the keys. I’m going to be honest with you, it’s just a fancy term to make pastors feel important. I know a few seminary professors that are feeling a disturbance in the force right now but don’t know why. But let me explain why I say that. When you study church history, like any other kind of history, you soon realize that many of the decisions that were made revolved around power, and more specifically, decisions to either gain more power or maintain the power a group already has. Much of the Reformation came into being because of the abuse of power by the church.

Ok, why am I talking about power. Well, because Jesus was in this story. After Peter proclaimed that Jesus was the Christ, the Son of the living God, Jesus told him, “I’ll build my church on this rock. The gates of the underworld won’t be able to stand against it.” What is the rock that Jesus is referring to? Well, the church has answered that in two major ways. Some said it was Peter. And some said that it was his declaration of who Jesus was, the Christ, the Son of the living God. The former saw it as an opportunity to claim some legitimacy to their new religion. Saying that Peter was the rock on which the church would be founded gave them a figure head that they eventually claimed to the first bishop of the church. Like I said, power was the driving force there.

But even those who claimed that it was his declaration that the church was founded on and not him, had power at its roots too. If you didn’t believe this than you were not one of us! You were out! And going to hell too but that’s for another sermon! And so, the office of the keys, the power to fasten and loose, or as I’ll put it in a moment, to lock or unlock, was thought of as being only for pastors and was connected to the forgiveness of sins. So for centuries you had to go to a priest in order for God to forgive you. And remnants of that remain to this day even in our liturgies, as only a pastor is supposed to proclaim forgiveness on a congregation with the words “you are forgiven.” If a layperson says it, as when the youth led worship a few Sundays ago, it’s changed to, “we are forgiven.”

Ok, enough of the history lesson what does this have to do with keys? I believe that the power that Jesus was talking about here, the power to fasten or loosen, the power to lock or unlock, is given to all of us. And that power, and how we use it, has ramifications here and now, in the kingdom of heaven. Remember, when Jesus spoke of the kingdom of heaven it was always in the present tense. It was not in the future in some far off place in the clouds. It was now. Think of it this was, the idea that we puny humans could really have an effect on the afterlife by what we do here on earth, is an exercise in gross egotism. It’s quite laughable really. As if God really needs our help in the other world.

It’s in the here and now that Jesus knew he needed our help. It’s in the here and now that we can have a real impact in unlocking the kingdom of God. How? By following Jesus, the ways of Jesus, all those ways I mentioned earlier, and more: feeding, healing, visiting, loving, forgiving, clothing, welcoming, etc. You have the power to lock or unlock certain things on the path that you find yourself on. What will you do with that power. And also recognize that there are things that need to be locked away, for good: racism, homophobia, islamophobia, xenophobia, sexism. Those things need to be locked in safe and thrown into the depths of a fiery hell never to be seen again! Can I get an amen? 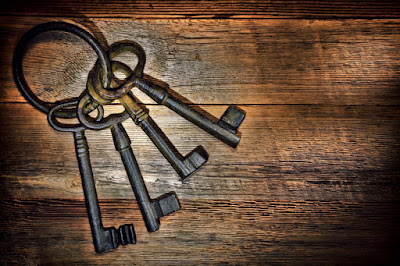 When we are baptized we should have been given a keychain, maybe not in place of a cross or Bible, the usual baptismal gifts, but we really should be given a keychain with keys on it. Because as baptized children of God we have the power to lock and unlock the things that are worthy or unworthy for the kingdom of heaven, here and now. I know it’s a heavy responsibility. Many of us don’t want a key to the church cuz we don’t want that responsibility and we certainly don’t want people to be looking at us when something goes awry at church right? Well, I’m sorry to break this to you but when we were baptized, and again when we were confirmed, we didn’t have a choice, we all were given a set of keys, which is why I think we confirm kids too young but I digress.

We were all given the power to fasten or loosen things in this world, to lock or unlock things in this world, the kingdom of heaven. What will we do with that power? How will we use those keys? What in your life, in your work, in your family, in your church, in your county, in your world, needs locked or unlocked? What will you do with the power that Christ, the Son of the living God, has given you? Because when the world goes awry who will the world look to? It is looking at us less and less. Before the world stops looking to us, before we are completely dismissed, maybe it’s time to polish those keys. Amen.