THIS IS NOT FOR YOU

Today’s reading from the Gospel of Matthew is broken into two sections, the first of which I just read to you, the other I will read in a minute. In that first section, we have Jesus teaching the disciples about what contaminates a person, what defiles a person, or more literally, what makes a person dirty. And it’s a teaching the disciples, or at least Peter calls, a riddle. It was such a different teaching for them that they just didn’t get it.

They had been taught something different, all their life, and let me just stop there and allow you to recall some of the things that you grew up believing, that you eventually changed your mind on. Some of us have had some pretty drastic change of hearts on certain topics. I know I have. I grew believing in a literal six 24 hour day creation, and that women shouldn’t be pastors, and that suicide victims were going to hell. None of those things I believe anymore.

Likewise, the disciples grew up believing in what’s known as a holiness code, or purity laws. They were rules to follow, and if you didn’t, it meant that you were no longer right with God. And many of these laws had to do with food. You couldn’t eat pork, shellfish was a no no so lobster and shrimp were out of the question. Most insects were off limits. That’s right, not all, there were certain locusts they were allowed to eat. You couldn’t mix meat and dairy together, so no cheeseburgers. Just to name a few of those holiness codes that involved food. So there was this emphasis on what a person put into their body, very inward focused.

And Jesus comes along with this teaching about what comes out of the mouth being more important. And they seem very caught off guard by this, as if the rug has been pulled from under their feet. It probably caused them to rethink everything they’ve ever believed! And what these dietary laws were really about was segregation, plain and simple—keeping outsiders out and insiders in. It allowed the leaders of a community to look at outsiders and say, this is not for you. Whether “this” meant this land, this community, this resource, this worship, this, is not for you. It’s for us. 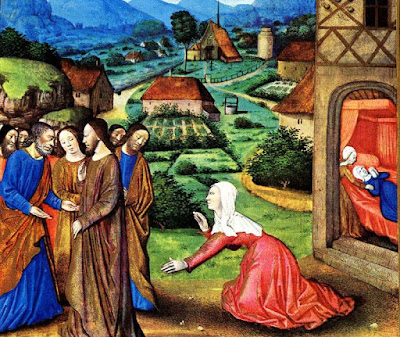 And actually, this teaching about what comes out of the mouth wasn’t really a new teaching. There a lot of proverbs for instance about how we wrongly use our mouths and tongues, but humans, as we know well, need constant reminders about how we are to live with each other and with God. And so, Jesus attempts to reteach them this lesson. However, it seems the disciples aren’t the only ones that needed a change of heart. And so Matthew shares a story with us, immediately after this teaching of Jesus.

And make no mistake, it’s no accident that this story is what follows that lesson. Not everything in these books is in chronological order, but rather scenes and teachings and stories are paired together or put into an intentional sequence. Almost as if Matthew thought to himself, if the disciples were stumped by this, then maybe my readers will be also, so I’ll share this story that will help to illustrate what Jesus was trying to teach here. And so he shares this story about a Canaanite woman and her daughter.

At this point I did an interactive exercise with four volunteers. It's an alternate version of scripture tableau. It's very effective! Here are some video clips of portions of it. Sorry for the distorted orientation and out-of-sync audio, but it gives you an idea of what we did during this portion of the sermon...

Thank you for indulging me. It’s a powerful story. And sometimes stories like that are even more powerful when you slow down and really allow each scene to sink in like that. This story really stands out for me, from all the stories of Jesus, because of the way that Matthew paints Jesus for us. He’s not only cold with the Canaanite woman but also seems downright rude. Not to mention the fact that he has a change of heart at the end. It’s almost as if Matthew is painting Jesus as the bad guy in this story. Matthew seems to portray Jesus as the one who needs to learn something here. And from a Gentile woman with a demon possessed daughter no less, I mean, there’s three strikes against her right there! And she’s gonna teach Jesus something? Hmmmmm.

The Canaanite woman then kneels in front of Jesus, maybe in honor, or respect, or desperation, but maybe, to make him stop and listen! And after pleading with him again, he speaks, and says, “I’ve come only for the lost sheep, the people of Israel.” In other words, THIS IS NOT FOR YOU.  Can you imagine, meeting Jesus, the savior of the world, the ruler of the cosmos, God incarnate, the Word made flesh, and hearing, THIS IS NOT FOR YOU! Whatever “this” she was looking for, this community, this deliverance, this salvation, this help, this healing, THIS IS NOT FOR YOU. Can you even imagine that? Well, I hope so, because that’s where empathy begins, that’s where a change of heart begins.

And then these two have spat about bread and dogs and crumbs and then Jesus has a change of heart, and ends up saying, this is for you after all, and the daughter is healed, and everyone’s happy. But we can’t even address that happy ending until we deal with the silence problem that we have. And when I say we, I want to be clear that I am including myself in that equation. I do not preach sermons that I don’t have to hear myself, ever. I want you to notice the progression that Jesus makes in this story. He goes from silent ignoring, to speaking a word of exclusion, to stopping and listening, to debating, to having his heart changed, and then speaking inclusive words from that new heart, and finally acting on them.

And we need to be specific about who we are talking to. Saying all are welcome is not enough. Everyone says that! Every church in America says all are welcome. And yet, Sunday remains the most segregated day of the week! The LGBTQ community doesn’t know if “all” includes them, because at that church over there it doesn’t, and at that church over there it doesn’t. How do they know that? Because they learned the hard way, the painful way.

I want to give you some homework. I want to give something very specific to do. I want you to reach out to the people of color in your life, the LGBTQ people in your life, the Jewish people in your life, and ask them if they’re ok. Reach out to them and ask, “In the wake of Charlottesville, how are you doing?” Some may not want to talk about it but may appreciate the question. Some may legitimately be ok. But my guess is that most are not ok these days! I’m not! I’m not ok! So now you know at least one person of color in your life is not ok! I have to watch people on TV march with torches because they do not want me here, who do not want my parents here, who would have rather my grandpa stayed in his own country.

And then I have to get up Monday morning and kiss my children goodbye, my children of color, and send them out into the world as if nothing happened, when the reality is that I send them out with fears that I should not have. Are they gonna get bullied today because of the color of their skin or their last name? Are they gonna be called the “N” word again? Are they gonna have to put up with another swastika at school again. You heard that right. Again! In our county! So no, I’m not doing ok!