A Kingdom of Death 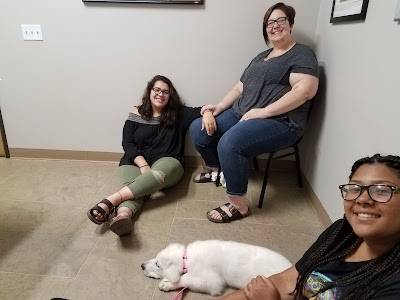 Today marks the one year anniversary of the death of our beloved dog Katie. And a week ago we got our new puppy, Pearl, named after a character from one of our favorite TV shows, Spongebob Squarepants. She’s a 15 week old Great Pyrenees. Yeah, she’s gonna be a biggin. So, we took her to her first vet appointment on Monday, and I knew it was gonna be a rough time for us because the last time we were at this particular vet we were saying goodbye to Katie.

So we walk into the room and sit down to wait for the doctor, and it dawns on me, that we are all sitting in the same spot as a year ago when we said goodbye to our Katie, Sara and I in the same chairs, Grace and Jesha in the same spot on the floor. And in my mind’s eye I can see us all sitting there a year ago. And superimposed over that image is this new image of us all in the same place except, instead of Katie taking her last breaths with us, it’s this youthful, energetic, joyful puppy.

Now of course we’d love to have never lost our Katie. We never want to lose our loved ones. If we could have had her forever we would have, no question. But, as I sat there with my mind playing with those two images, I couldn’t help but acknowledge that we wouldn’t be experiencing all this puppy awesomeness, without Katie dying.

Whew! Ok, I got through that first part of my sermon. Moving on to our gospel story for today. Thanks to this story, my wife and I implicitly call each other Satan on a regular basis. Whenever we tempt each other with something like desserts or snacks that we shouldn’t be eating we will just say, “Get behind me.” We don’t even have to say Satan, we know what we mean by that.

In our story, Jesus scolds Peter, calls him a stone that’ll make Jesus stumble, notice the irony there, last week he called him a rock, part of the foundation of the church, and now he’s a stumbling stone. But why he calls him that is what really caught my eye, because Peter was not thinking like God, but thinking like a human! And I thought, well of course he is, because he’s not God, he is a human! Cut him some slack! But maybe that was just my way of saying, “Cut me some slack.”

But he doesn’t. Because Jesus knows that wrong thoughts, are not just thoughts in and of themselves, but thoughts lead to actions. But I’m getting ahead of myself, what was this wrong way of thinking that Jesus is referring to? Life without death. Opportunity without change. Gain without loss. Freedom without sacrifice. Resurrection without the cross. This was the kind of thinking that really rubbed Jesus the wrong way.

Of course, he had good reason to be salty about it, according to Matthew he knew how his ministry would end, in death, one of the brutalist kinds. Last week I talked about how following Jesus meant more than just a different way of thinking and believing, but it meant a different way of living. And then we get this story about what following Jesus looks like, and it looks like death.

The kingdom that Jesus keeps referring to is not just a kingdom of new life full of joys and opportunities and puppies! It’s first and foremost, a kingdom of death. Oh pastor that sounds so depressing! People aren’t gonna join our church if you’re gonna keep talking like that. People wanna come here to be uplifted and feel good about themselves! Well, that’s fine, as long as you’re ok with the fact that meanwhile, people are hurting, dying even, because we don’t want to face death, we just want to skip to the end with the daisies and puppies. And the death Jesus is talking about is not the physical kind, but the metaphorical kind. Let me give you some large scale examples.

And they answered that with a resounding yes. If they hadn’t already done so they switched to worshipping solely in English and that is when you began to see American flags in sanctuaries. Now, there isn’t anything inherently wrong with our German heritage, or the German language, but they had to determine if their tie to it was worth the cost. Was this keeping them from spreading the good news that they were called to? Their answer was yes, and it ended up opening up opportunities that they could not have imagined.

Likewise, fast forward to 1970 when the Lutheran church in America was faced with the decision to ordain its first woman. It was not a popular move by any stretch of the imagination. It solidified the divisions already in place within the church as well as creating new ones. But again, the church had to question whether or not this was something that had to change within us, our views regarding women. Was this something that we were being called to allow to die within us, so that new life could emerge from it? Their answer was yes, and it ended up opening up opportunities that they could not have imagined. Some of the most life giving pastors in my family’s life have been women, without whom I may not be here today as your pastor.

Fast forward to 2009, when the ELCA had another decision before her, whether or not to fully include homosexuals into our ministry. It was not a popular decision by any stretch of the imagination. On one side there were people saying finally! And others could not even believe we were debating such a heresy! But the question before them was this same old question that Jesus had told them about 2000 years ago. Is this a moment when we are called to take up our cross? Is this something that needs to change in us, meaning our views against homosexuals? Is this something that needs to die in us, so that new life can emerge? And the church said yes, opening up opportunities that we could have never imagined.

Being called to the kingdom of God means being called to a kingdom of death. In our baptisms we are called to die with Christ in the waters of our baptism, so that we can be raised with Christ. And not just after we die, but here and now. Why? For the sake of the world. This same ancient question is still being asked of us. What needs to change in us, be transformed in us, die in us, in order for new life to emerge in our world? Another way to ask that is this, what are we being called to sacrifice in order for us to bring life into a world filled with so much death? If we are not willing to ask ourselves these tough questions of faith then we have to be prepared to say that Christ died for nothing. And I am not prepared to say that. Because Christ died to bring life into this world. And Christ brought us. Thanks be to God. Amen.