When we first moved to the house we now live in, the backyard was completely overgrown. It was so bad that at least fifty percent of it did not allow you to walk upright. You had to crouch down to walk through most of it as if you were lost in the jungle. So that first year I spent a lot of time back there, cutting, pulling, yanking out all the overgrown vegetation. It was good exercise for me, but there were times when it got the best of me and I needed some help, when a root or tree trunk wouldn’t budge from the ground it had clearly called home for a long time. When things got that bad, there was one person I knew I needed to call. My teenage daughter, Jesha.

So, I’d get my phone out as I took a rest in that mess of a backyard, and called Jesha, who was just inside the house, because that’s how families communicate these days. And when she would answer, I wouldn’t just ask, “Can you come out and help me, please?” There was a key phrase that would signal to her just how dire the help really was. I would say, “I need your help in the backyard, and I need you to come in Beast Mode.” Beast Mode is what we call it when I just need her brute strength and let me tell you, she is one strong specimen of a human being. There were times when she would come out and see me struggling, pat me on the shoulder to signal to me to get out of the way, and like Samson of old, she’d just rip out whatever it was I was struggling with! Let me tell ya, her Beast Mode is something to behold!

Now, let me tell you about my other daughter, Grace, and her Tank Mode. All her life she has been a protector. She and her sisters might fight like cats and dogs but when there’s an outside threat, she will go into Tank Mode faster that you can say help, and no one will touch her sister without first going through her! Tank Mode is something to behold too but I’m not gonna lie, it’s a bit scary to witness! The first time I saw it, she was probably around three, four tops, and my wife Sara and my oldest daughter were wrestling on the bed, and I guess things got a little too intense for tiny little Grace, and before we knew it, we heard what can only be described as a battle cry coming from the corner of the room, “Don’t hurt my mommy!”

And as I look over, she’s running at full speed, though in my memory this is all happening in slow motion, and she throws her whole tiny body into her sister, who was twice her size but she didn’t care, because she had to save her mommy. I literally had to pull her off her big sister and assure her that no one was in any real danger. Like I said, it’s a bit scary to witness but also comforting at the same time. Beast Mode, Tank Mode, we all have different kinds of modes that we can turn on at any given moment, different switches we can flip when a need arises. Have you ever seen Lisa’s Mama Bear Mode? Well, if you do, word to the wise, just step out of the way. Ok, so why am I talking about our different modes? Well, because I noticed a few in our readings today and one in particular really got me wondering.

The first one I noticed is from our first reading, which was from Isaiah. The first line says it all really, “Awake, daughter, awake! This is Isaiah being in Prophet Mode. Prophet Mode is less about telling the future, which is what most people think of when they hear the word prophet or prophecy, and much more about disturbing the status quo. In this passage, Isaiah was literally telling them to, “Wake up! Snap out of it!” Which is particularly poignant when the person or people being told that, doesn’t realize they’re asleep! Meaning, I think it’s all too common for us humans to not even know when we are stagnant, standing still, with no forward movement, either content with the status quo or just too lazy to do anything about it! And sometimes you can get by for a while like that. Isaiah was there to tell them, times up.

Hold that thought, as we take a snapshot of the next two readings. Our Psalmist is in Cheerleader Mode, but not to cheer us on, to cheer God on, to urge God to be the God that the Psalmist knew God to be. One who is faithful to us, with a love like no other. And in our second reading, Paul is doing what Paul loves to do, be in Teacher Mode. But it’s our Gospel reading that I found most fascinating. Here we find the only story of Jesus’ childhood from the time the magi visited him as a toddler to when we encounter him as an adult, that made its way into the Bible. In reality, there’s lots of stories about these missing years written back then, they just didn’t make it into the Bible for a variety of reasons which we don’t have time to get into.

In this story that Luke tells, the twelve-year-old Jesus and his parents are making their yearly pilgrimage to the temple in Jerusalem to celebrate Passover. On their way back is when things go sideways. Now, maybe he was very mature for his age and was given a lot of freedom, but it took them a day to realize that he wasn’t in their traveling group, and then another two days of backtracking before they finally traced him back to the temple! Mary is in full-blown Mom Mode. I mean, you can practically here her use her mom voice. You know the one, the voice they use when there’s a lot of people around and they don’t want to cause a scene but they also want to communicate to you that this is far from over! Yeah, nobody likes the mom voice. And Joseph, well, he just seems to be in Oblivious Mode, otherwise known as Dad Mode. 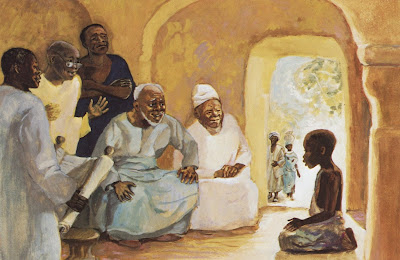 Now, I have preached on this story many times over the past decade. One time my sermon was titled Jesus the Brat Child, keying in on how he sasses his mother. Another time it was titled, That Time We Lost the Kid. But as usual, it was something else that caught my heart this time around. Luke writes that they found the twelve-year-old Jesus in the temple, “sitting among the teachers, listening to them and asking them questions.” Jesus was in Wonder Mode. The savior of the world, the ruler of the cosmos, the King of kings, was sitting there looking up at these weathered, gray faces, listening and asking questions. Wouldn’t you have loved to be a fly on that wall! What was he asking? What could he have possibly been wondering about? I don’t know, but I don’t think that’s the point here.

Jesus here is demonstrating something that I think has largely been lost in our religion. And that is a sense of wonder, of questioning, of searching for something new, of doubting, of critical thinking, and, being comfortable with not getting all the answers we want. After two thousand years, the church has acted like we’ve got all the answers, we’ve had long enough to figure all this faith business out. And we have become comfortable with the answers provided. So much so, that any other answer is automatically suspect, if not outright labeled heretical. Let me tell you something, if Jesus can sit there and wonder and question and listen, imagine how much freedom we have to enter into Wonder Mode! But we humans like to have answers, they bring a sense of comfort to us.

And we also like things in black and white, right and wrong, left or right. Gray areas? Not for us? Uncertainty? That’s a form of weakness! Not having the answers? Our society will label you naïve at best. Well, that’s not what Paul calls Jesus in our second reading. Paul calls him the very personification of Wisdom. Which in itself is interesting because the Hebrew scriptures always personified wisdom as a female but that’s a discussion for some other time. This is what I hear God saying today. It is not weak to be uncertain. It is not naïve to not have an answer. And the gray areas of our faith, and there are many, many more than we’d like to admit, those areas are not devoid of God. On the contrary, God thrives there! Because that’s where we grow, where we are stretched, where our hearts and minds are opened.

The gray is full of adventure and excitement! But the only way to get there, is to be like Jesus in our Gospel reading, and go into Wonder Mode with our faith. And I’d be lying to you if I said it wasn’t scary in the gray, but if it makes you feel any better, you’ll be in really good company there! So go ahead, question your faith, think critically about what you read in the Bible, dabble with some doubt and see where that takes you! Don’t settle for something some old, white, straight guy wrote a long time ago just because he got some doctorate somewhere. Jesus didn’t call professors to follow him. Heck, he didn’t even call ministry professionals to follow him! He called people who had a heart, a heart that wanted more out of faith, a heart that wondered if there was more out there. So, do yourself a favor, try out your faith sometime, in Wonder Mode. Just, don’t forget to buckle your seatbelt. Amen.