Sermon inspired by Mattew 3:1–6, 11–17 as found in A Women's Lectionary for the Whole Church, Year W. Press play button ▷ above for audio.

As some of you may remember, I serve on our synod’s Candidacy Committee. For those who don’t know, a synod is simply the geographic areas that our denomination is separated into. Ours is the Sierra Pacific Synod and it stretches from Porterville to the Oregon border, and from the West coast to Elko, Nevada. And just like a congregation, each synod has an ordained leader, only there it’s called a bishop, and it has a council and lots of committees. The Candidacy Committee is in charge of overseeing those who want to become pastors and deacons in our denomination. It’s been extremely rewarding work, and honestly, some of the most holy work that I do, other than leading worship for you all of course!

But it’s an honor to accompany others on the same journey to ordination that I took not that long ago. One of the things that has been enlightening for me is the advice that I hear myself giving them. Whatever it is, it almost always comes from my own experience as a pastor, and usually from the pitfalls that I have encountered over the years. I find myself getting quite protective of them. A common piece of advice that I give baby pastors is this, “The day to day duties of a pastor take up more time than you think, leaving less time to do the “exciting” stuff that I know you want to do. Unless you’re a workaholic.” Which always leads to a second piece of advice, “Don’t be a workaholic!” Nobody is going to sing your praises after you die for being a workaholic.

Because being a workaholic is easy! But being good at your job, whatever it is, while also making quality time for family, friends, those in need, and self-care—that takes real work—and you will be remembered for it because it will leave a lasting impression on a lot of people. But I digress. What “exciting” stuff am I referring to when talking to these incubating future pastors? Well, a lot of them are social justice warriors, ready to take their ordination papers to the streets before the ink is even dry, to battle each and every injustice that comes their way! Some of them are interfaith networkers, ready to show the world just how wide God’s love stretches as they work side by side with people of other religious faiths.

Some are writers, some are social media influencers, some are musicians, some are podcasters, some are youth ministers, some even want to be politicians! Unfortunately, there’s just not a whole lot of extra time to work on those “exciting” things. Especially since so many of them are going to find themselves in churches a lot like Bethlehem, where they’re gonna end up carrying the load of two or more positions! Heck, for ten months in the heart of the pandemic I was pastor, office manager, and music director! Not that I’m counting or anything. So what I ask them is this, “Do you find the day to day, week in and week out, work of a pastor, exciting? Because if not, are you absolutely sure this is what you want to spend the rest of your working years doing?

But, this is really getting at something deeper, something more foundational. What we’re really talking about is, managing your expectations. How well you manage your expectations is going to have a profound impact on how successful you are. And, of course, I’m not talking about financial or professional success. Although, this could apply to those too. I’m talking about how successful you are at being a human being. And since I am a pastor, I’m also talking about spiritual success as well. Now there’s a concept, right! Spiritual success? What in the world is pastor talking about now? Well, for the answer to that, let’s focus our attention on today’s Gospel reading. We read about the Baptism of Jesus, but oddly enough, it wasn’t Jesus that got my attention. I’m sure he’ll forgive me. 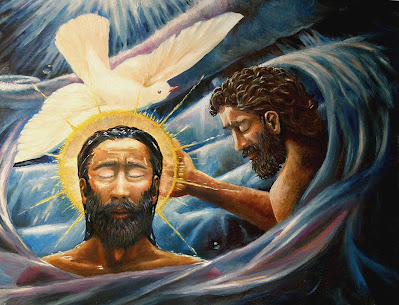 What grabbed my attention was John. Now, I have always found him to be a fascinating character. I mean, who doesn’t love a camel hair wearing, bug eating, wilderness preacher! But it’s practically impossible to walk away from the Gospels and not have a ton of questions about this guy! Like, why did he dress like that? Why did he eat like that? Did his personality make up for it all? Not to mention all that has been written about the possible mental health challenges that he may have suffered from. Fascinating character, but it’s none of those things that caught my attention. It was actually the struggle he has in this story of Jesus’ baptism, and particularly how he gets through it, in the moment even. So, Jesus makes his first appearance in the Bible as an adult.

There’s nothing in the Bible about him between last week’s story of him as a twelve year old boy in the temple to today’s story at his baptism. Scholars have said he was around thirty years old by that point. John is about the same age, and is a cousin of Jesus, which we read about last month in the story of Elizabeth. We know even less about his life up to this point. Jesus finds him in the wilderness by the Jordan river in full blown ministry mode. He is baptizing, preaching, teaching, telling everyone who would listen that the messiah was almost here. He dressed like a prophet, ate like a monk, and had already gained a large following. Not only were crowds of people coming to see him in the wilderness and getting baptized, but the religious leadership was also coming out to see what all the fuss was about.

Which is just another way of saying they were wondering what was taking attention away from them. So, in the midst of all this, Jesus shows up and he too wants to be baptized, and John, looks Jesus, the savior of the world, in the eye, and says, “No!” But he doesn’t stop there! He explains to Jesus, that he’s got this all backwards! As if Jesus doesn’t know how to be the messiah, he says, you should be baptizing me! And no one would have blamed Jesus for getting angry at this point and saying, “Who do you think you’re talking to, bug breath!” But that’s not the Jesus we know, is it. Jesus oozes empathy and goes straight to the heart of the matter like only Jesus can, looks John in the eye and says, “Let it go. This is the way it’s meant to happen.” Let it go. So, what did John have to let go?

Why was baptizing Jesus so difficult for him to do? Why did it feel so wrong for John? Well, if you go to seminary, they’ll give you lots of answers for that. Deep theological answers about the nature of Jesus’ divinity, the nature of Jesus’ humanity, and don’t get them started on how Jesus’ baptism was different than ours! There’s a whole separate bookcase for that topic! Have you ever noticed when an answer is particularly complicated, that you begin to wonder if it’s because they really don’t know the answer? Yeah, I got the feeling quite a bit in seminary. So, none of their answer were really satisfying concerning John’s hesitation to baptize Jesus, and so I searched for something a little more down to earth. Truth be told, these biblical authors were not writing grand theological dissertations.

They related truths using very relatable, human stories. So, what did John have to let go? He had to let go of his expectations, his preconceived notions of who Jesus was going to be, how Jesus was going to operate, what Jesus was going to believe. As his cousin, John already knew Jesus, they probably grew up seeing each other regularly, probably spent holidays together. But John didn’t know this Jesus, the Jesus who was now ready to get to work as the messiah, the savior of the entire universe. And already, in this first moment of meeting Jesus the messiah, he’s already not meeting his expectations! On day one! Hell, on minute one! In John’s eyes, Jesus is already failing! Thankfully, Jesus knew. Jesus knew John’s struggle.

And he also knew it was going to be a common struggle, with everyone who encountered him…then and now. Jesus knows that in order for something new to come our way, that we have to let something go. Sometimes it’s a preconceived notion or expectation we have, sometimes it’s a particular attitude or perspective we have, sometimes it’s our ego, sometimes it’s our behavior, only you and Jesus can determine what that is. Whatever it is, Jesus is looking at you in the eye, both of you still dripping from the waters of your baptisms, and says, “Let it go.” Jesus doesn’t just bring life, Jesus brings new life, emphasis on new, something you’ve not experienced before, something you’ve not thought about before, something that’s gonna surprise you, excite you, maybe even startle you a bit!

And there’s Jesus, still standing there with you, at the river, saying, “Let it go.” And like John, you probably know what it is he’s referring to. Thankfully, each day, hell, each moment, we have that same opportunity to let it go, and let Jesus surprise us with whatever is up his sleeve. And I know, we all have different feelings about surprises, but this is Jesus we’re talking about. We know him. We trust him. My advice, would be to follow John’s lead and let it go. Not so that God will love you, God already does, but so you can see what new thing Jesus has up his sleeve for you. Because God has already looked at you and proclaimed to the universe, “This is my child, my beloved, with whom I am well pleased.” Thanks be to God. Amen.