1st in three-part series on Stewardship

Today we start a three-week series on the topic of stewardship. Stewardship is another one of those very churchy words. You don’t hear it much outside of the church world. It’s not as churchy as a word like, sanctification, but it’s still a pretty churchy word. So, what is stewardship? I think when most of us hear that word we think of money. No matter how much we are told that it’s more than just about money, money is still the first thing we think of when we hear the word stewardship. In addition to what we think, we probably all have very different reactions to the word. Some of us might cringe, others might get a shiver down their spine, others might clutch their wallets tighter. I think that’s why there’s such a push to convince people that stewardship is more than just about money.

And it certainly is, which is why we won’t get to the topic of money until the third and final Sunday of this series. However, with today’s mainline churches struggling with their finances, shrinking attendance, budgets that feel heavier than they’ve ever felt before, I’m not gonna lie, it took a lot of convincing, to myself, to wait until week three to talk about money. Because truth be told, it’s not prayers or thoughts or well-wishes or getting more volunteers, that’s gonna lift churches out of this financial funk that we find ourselves in. At least, not by themselves. It’s gonna be cold hard cash, is what our brains keep telling us! And it’s hard to argue with that. But my brain also tells me that nothing is that simple. Maybe this topic needs some nuance. So, let’s see what we can do.

By definition, stewardship is the job of being a steward, and a steward is someone who takes care of, manages, is responsible for, someone or something. In the church world, we believe that we are called to be stewards of all that God has entrusted us with. From the world around us, to her creatures, to the elements, to our fellow humans, to ourselves, and yes, our money and wealth. The underlying premise for this entire series is that we are called to be caretakers of all that we believe we have been given by God. Quick side note, just to keep us grounded, we are not the only ones called by God to be stewards. Who takes care of our air? Trees are the ones that have been called by God to be stewards of the air.

Who takes care of our digestive system? Bacteria are the ones that have been called by God to be stewards of our digestive system. And don’t get me started on dogs, and all they do for us. In the past, the church has elevated humans above all other creatures and living things. This is not only an arrogant stance, but a harmful one as well. Because if we believe we rule over someone or something, the odds of us abusing that power is pretty darn good. But let’s get back on track. The catchphrase that caught on about a hundred years ago to teach people what stewardship entailed was: time, talents, and treasure. We still use this today, cuz it’s a great little catchphrase, and pretty accurate too. So I figured, why not separate this series with those! That’ll be easy, right! 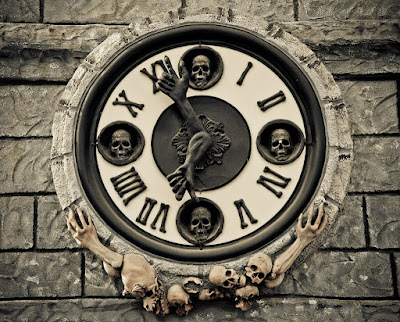 Wrong! That idea did not turn out as easy as I thought but I like a challenge so here we go. Time, time is something that is on our minds a lot, especially compared to centuries past. Imagine living a life when the only times that you needed to know were when the sun came up, when the sun was at its highest, and when the sun went down. That’s it! I don’t know about you but that sounds like total bliss. Today though, everything seems to revolve around time, doctor visits, store hours, going to the gym, coffee with your pastor, school schedules, when to take your pills, when to give your dog her pills, there’s just no escaping that clock. Did you know that there’s 56 days til Christmas? I know, that was cruel, but did you feel that as soon as I said it?

For most of us, that either felt like a dagger to the heart or a punch to the gut! Rarely do adults hear that and get excited! That clock just feels like it’s always breathing down our necks though. And even worse, it’s always whispering in our ear, “Do you have enough time? Are you sure you have enough time?” And the answer to that question is almost always, “Yes.” I know it doesn’t feel that way, and I also know that you’re not gonna wanna hear this, keep your rotten tomatoes down, for now! I have a feeling this series is gonna be full of cold hard facts that make us uncomfortable, or hit a little too close to home. Don’t kill the messenger! Here’s the first one: We have time for things that are important to us. We make time for things that are important to us.

Think about it, we complain all the time that there aren’t enough hours in the day but when something arises that is important to us, all of a sudden, we find a way to fit it in. And sometimes it’s for wholesome things like family time, and sometimes it’s for self-care things like walks or reading or grabbing a beer with a friend who doesn’t mind listening to you complain. And sometimes it’s for selfish things that we find the time for. No matter what it is, if it’s important to us, we find the time for it. Which is why, and here’s cold hard fact number two for today, get your tomatoes ready. I’m gonna let you in on a secret from a pastor’s brain! They’ll never tell you this, unless they’re a fool like me. But this is why, whenever someone tells a pastor all their excuses for not attending this or not participating in that, it just falls flat.

Not because we pastors don’t care about your time, but because we pastors have all the same life stresses and frustrations and family garbage and busyness as everyone else. And yet, we’re expected to show up at everything! And do you really think we do that for the money? Do you really wanna go there? No, we show up because these things are important to us. And we want them to be important to you. And of course, we don’t expect you to show up to everything. But I at least wanted to give you another perspective before you tell your pastor, and I hope to God it’s still me after this sermon, about why you didn’t come to this or that. The point of this is not to make you feel guilty although I may be past that point already. My point is to give you perspective and guidance, as you ask yourselves either, “What is important to me?” or “Why isn’t that important to me?”

Let’s end by turning our attention to our Bible reading, which was from Matthew. The word treasure is used several times and so you’d think this would have been perfect for the Sunday we go over money and wealth. But I noticed something else that I hadn’t before. Time is ever present throughout this reading, but you have to read between the lines. In this reading, Jesus is trying to give perspective and guidance on how we see our wealth but he uses a very interesting tactic. Almost all of the metaphors that he used, take up a lot of time in people’s lives. Let’s go through them real quick. Collecting treasures. Have you ever collected anything? Baseball cards, spoons, bells, Star Wars figures, whatever it is, it is a time-consuming hobby. Next one, Jesus talked about worrying.

How many of you spend too much time worrying? It’s awful, isn’t it! If I spent half the time I worry on something more positive, who knows what I could accomplish! Next is food and drink. Now, for a big guy like me, Jesus almost lost me at, “Isn’t life more than food?” It took everything not to just check out at that moment! But also, as someone with an unhealthy relationship with food, I can totally relate to why he said that! And don’t get me started on the whiskey collection I started during the worst of the pandemic! Next one Jesus mentions is our appearance. This is a tough one to talk about, especially in these times, because it’s so easy to be labeled as vain if you spend too much time on your appearance, and if you don’t spend enough time on it, people start to worry about your mental well-being.

Either way, we are a culture that is obsessed with appearance. When we meet someone who looks very different than us, maybe it’s a bunch of facial piercings or tattoos, or curly hair, or red hair, or someone’s weight loss or weight gain, our brains start short-circuiting or something! We get tongue-tied, we put our foot in our mouth, and we can’t think of anything else to talk about other than their appearance! What I wish Jesus would have said here is, “Why do you worry about what other people look like so much?” If I was his editor I would have had him add that. Point is, we spend an unhealthy amount of time on our own appearance, as well as others. And since this is a stewardship sermon, this begs the question, are we being good stewards of our time?

If so, just let me know and I’ll put an extra star on your chart. If not, then it might be time to take inventory of your time and start asking some tough questions. How much time do I spend on everything? And since this is a sermon, the questions should include things like: How much time do I set aside, from the top mind you, not the leftover time at the end of the week, on things like—my relationship with God, my relationship with my church family, the growth of my church family? What is important to me? What is apparently not important to me? And why?! What I don’t think gets said enough, is that time, talents, and treasure, wasn’t meant to be a multiple-choice test. The truth is that God calls to respond to each of those in some way.

Maybe not equally, but as you’ll see over these three Sundays, we’re called to respond to each. Not because God will love you more, and certainly not so you can stay in “good standing” with the church, but because the world needs our time, so badly. This world is never gonna heal without our time that we are called to generously give. So, as you take inventory of your time this week, that’s your homework, and if you want extra credit, and if you’re brave enough, do it with someone else who knows you well. You might be shocked at how they see your time versus how you see it! Either way, as you do this, know most assuredly my friends, that God always has time for you, never tires of your joys and sorrows and whining, and looks at each and every one of you as if you were the most important thing in the cosmos, even though you’re not. Thanks be to God. Amen.