With today’s Elijah story, we now enter into the time of the prophets. And we will stay with them until the last Sunday of Advent when we will begin our journey through the Gospel of John. The prophets are an interesting group of guys, to put it lightly! They love God and they love their people, they just happen to love them like a cantankerous old uncle that’s lost all their social skills! I’ve always wanted to use the word cantankerous in a sermon! I can check that off now. For those of you who have spent any amount of time with the prophets, especially here every Fall, tell me that isn’t an accurate description of these characters! These guys were not pastors. They just weren’t pastor material. And that’s not an insult. I admire them for their honesty and even their lack of social skills!

Their love was harsh, rough around the edges, even off-putting. And yes, there’s a place for that for pastors too but pastors also have to know how to love their people gently. And that’s a skill that prophets didn’t have worry about much. And again, I’m kinda jealous! How refreshing it must have been to say what’s on your mind and not have to worry about what people thought or what feelings you might hurt or if you might get fired! Refreshing yes, but it was also stressful, anxiety producing, depression inducing work, as we see in todays reading. And speaking of stress, there was a lot of stress among God’s people at this time in the biblical narrative. After King Solomon died, the kingdom split in two, a northern kingdom, called Israel, and a southern kingdom, known as Judah. And both were filled with political and spiritual strife.

Each had their own king and most of them were not very good ones. That coupled with a people that were still waffling in their commitment to God, amid surrounding nations that were just waiting for an opportunity to pounce on them, and they had a recipe for disaster. This is where the prophets come in. They were there to try and get these two kingdoms back on the straight and narrow. They were there to warn them of the consequences of their bad behavior. We think of prophets and we often think of fortune-telling prophecies but that kind of work was only about one percent of their job. Most of their work, was speaking truth to power, and reminding them of God’s promises, as well as the promises that they’d made to God. Needless to say, they didn’t have many friends.

These prophets were mighty characters, each a force to be reckoned with, but they were not perfect by any means. They were human, and sometimes they overstepped. And that is where Elijah finds himself in today’s story. You see, right before this story, Elijah had a big throw down with Jezebel’s prophets, she was the queen of Israel but of course, of another religion with her own prophets. Now, that might not sound like a big deal to us. I’m guessing most of you are pretty accepting of other religions. I mean, I don’t mind telling people that I love Jesus and why, but if they don’t agree they don’t agree. Whatever brings them happiness and makes them a better human being is fine with me. But in Elijah’s day, that kind of thinking just didn’t fly. There was no room for religious tolerance! 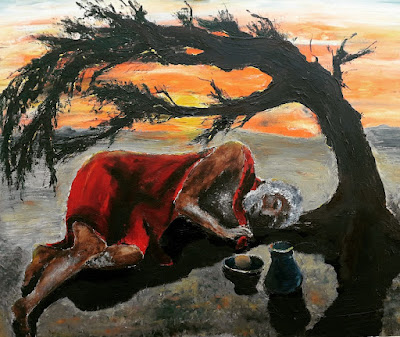 So, Elijah defeats Jezebel’s prophets in this big test to see whose God would answer them, but where Elijah oversteps is when after he wins, he murders all of Jezebel’s prophets. God never asked him to do that. And so now, he is on the run. Jezebel wants his head and so he runs to the southern kingdom, outside of Jezebel and King Ahab’s jurisdiction. He finds himself in the wilderness, at Mount Horeb, the same mountain that God’s people found themselves at after fleeing Egypt, the same mountain where God spoke to Moses. Coincidence, I think not. Elijah finds himself a solitary broom bush, and lays down in utter defeat, in the throes of a major depressive episode, hoping death would come to relieve him. My heart goes out to him, and to all who have been in that state of mind, and the people who walk that road with them.

It’s at that point that a voice tells him to get up and eat. Elijah opens his eyes and sees food before him. So, he gets up and eats and then goes back to sleep. Again, the voice tells him to get up and eat because his journey ahead will be difficult. Oddly enough, Elijah doesn’t question this but a moment ago he wanted to die, there was no journey ahead for him in his mind. But he gets up and eats anyway. Forty days and forty nights go by, where have you heard that before? Again, not a coincidence! Elijah than finds a cave on Mount Horeb and spends the night there. Let’s pause here a moment and process what’s going on here so far. Elijah runs for the hills, afraid for his life, ends up in the wilderness like his ancestors before him, is at the lowest of lows, and what does God do? Feeds him. God feeds him.

As bad as the wilderness may be, it’s also a place of nourishment. And isn’t that always the way with God. Looking for every opportunity to flip the script! To enter the scene with small mercies when you least expect it. Because I’m sure Elijah wasn’t just running from Jezebel but also from God too. Remember, God didn’t ask him to kill all those prophets. But not only is God merciful, God isn’t going to give our own bad behavior the power to get in God’s way. God’s will will be done one way or another. Even in spite of us.

And now, think of your own lives and the various wilderness places that life has taken you, places where you feared for your own life or livelihood at least, places of fear, places of shame, places of existential crisis, places of spiritual crisis, or a wilderness that has no easy label. Were their places of nourishment there, no matter how small? I’m guessing there were, if your places of wilderness were anything like mine.

So, after forty days and forty nights, God asks, “Why are you here, Elijah?” Elijah rattles off a list of woes, as if God doesn’t know them. And almost as if God ignores Elijah’s little list, God’s only response is to tell him to step outside his little cave because God was about to pass by. Elijah complies, and a great wind tears through the mountainside, so strong it rips right through the stones! Surely that must be what God looks and sound like! Nope. Then a powerful earthquake shook the ground! Surely that must be what God feels like! Nope. Then a terrifying fire sweeps through the land! Surely that must be God! Wouldn’t be the first time! Nope. And then there was a sound, thin, quiet, like a whisper. And God says, “Why are you here, Elijah?” And it’s at this point I have to laugh every time I read this!

Look, I’m a very sarcastic, dark humor kinda person, and so maybe that’s why I laugh here, but I can’t help but hear a sarcastic, almost comical tone to God’s little whisper! I mean, all those theatrics just to repeat the same question that God asked before? “Why are you here, Elijah?” And then, as if to continue the comical tone, God’s question goes right over Elijah’s head, and he rattles off the exact same little list of woes that he rattled off the first time God asked him why he was there! This time, God responds differently, and with less theatrics. God tells him to go back. He doesn’t offer any comfort, which is what you might have expected. To be fair though, God had already fed him, God had already taken care of him for the past forty days and forty nights. So, instead of putting an arm around his shoulder and telling him everything’s gonna be alright, God tells him to go back.

These tables that surround us today, with all these beautiful pictures of lost loved ones, glowing with their light that still shines on us to this very day, bring a host of emotions, filled with good memories, and painful memories, hope, and grief. This Elijah story reminds us that these tables also represent moments in our lives when God whispered to us, “I’m not done. I’m not done.” And that is not said to dismiss our pain and grief, but to make sure that a healthy dose of future hope is present as well, as nourishment for the journey ahead. And this applies to all kinds of wilderness experiences.