The Four Horsemen of the Apocalypse

Ron Valadez · The Four Horsemen of the Apocalypse

We are now in week three of this five week series in the book of Revelation, or as we learned last week, the Apocalypse, or Revealing by Jesus Christ. I’ve had a few requests for Amanda’s sermon who kicked off this series with you two weeks ago. So, I posted it online along with my sermon from last week in case any of you missed it. I’m always surprised and humbled whenever I hear that some of you actually take the time to listen to a sermon that you missed, some of you even do that on vacation! I can’t tell you how much that is appreciated by preachers, since most of us put a lot of time and effort into these sermons. Anyway, let’s dig in to our reading for today, which comes from the sixth and seventh chapters of Revelation.

And just when I think I’ve given you enough background and context, I always think of something else to share with you. And maybe it’s better to give it to in small bite size pieces anyway so I don’t bore you death. But the bite sized bit of information that I want to give you today, which is particularly relevant to today’s reading, is the both/and nature of this book. I mentioned last week that the author really wanted to give people hope for the present, hope they can sink their teeth into in the here and now.

At the same time, as we hear in today’s passage, there’s also a future element to this hope, as well as the not so hopeful parts. My point is, it doesn’t have to be one or the other. It doesn’t have to only be about the present or only be about the future. It can be about both. And we see that in today’s passage especially. In fact, I think there is a danger in only seeing this about the future, or only seeing this about the present. But I’m getting ahead of myself as usual. Let’s take a look at chapter six. 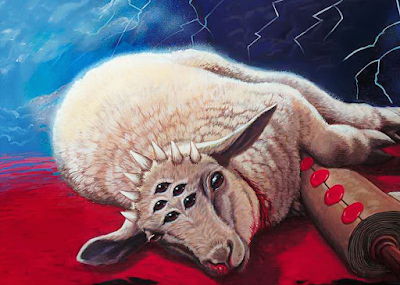 Here we get to watch the wee little wounded lamb begin to open the seven seals of the scroll from last Sunday. We only read the first four because the first four reveal the four horsemen of the apocalypse. One of the most well-known group of characters from this book. Even if you’ve never read this book you’ve probably heard of the four horsemen of the apocalypse! I found some really cool black and white images of them that I could have used on the cover of the bulletin after I already printed them, and I was really tempted to print them again and kill a second forest but I restrained myself! One, it would have been an unnecessary waste of paper but equally important, it would not have been in line with the author of Revelation, who wants us to keep the wee little wounded lamb as central. So, that’s what we’ll do!

But let’s talk about these horsemen! Talk about some vivid, creepy, if not altogether scary imagery! Each one appears after a seal is opened, and each one represents a series of events that the author wanted to warn those original readers of. The first one is on a white horse and its rider held a bow and wore a crown. This is the rider of conquest. Now you don’t have to be a history major in order to know a bit about the various nations that have conquered each other over the past few millennia. From the Egyptians and Babylonians to the Greeks and Romans, conquest has been a human endeavor for a long time. But, there’s no need to go that far back, when we have examples that hit closer to home, in which people are still feeling the effects of today. 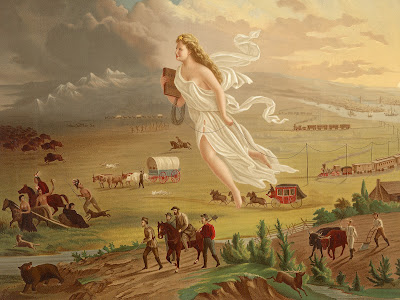 In this 1872 image by John Gast called American Progress, we see our own version of conquest. At first glance, it seems like a very serene, picturesque scene. Quite peaceful, as conquest is often disguised. Upon closer inspection though, you can see on the left, the Native Americans fleeing, as well as the buffalo and bears and other native life. Now, some might say, but this was so long ago! Well, yes, but this was only one example. Talk to any person of Mexican or African decent and you will not only hear a similar story, but a story that continues to this day, only with a different looking disguise. But there’s another seal to open!

This one ushers in the red horse, and its rider has a large sword. Red is an appropriate color for this rider because this is the rider of violence. Only instead of the institutionalized violence of the white horse, this is the violence that we humans choose to inflict upon each other. 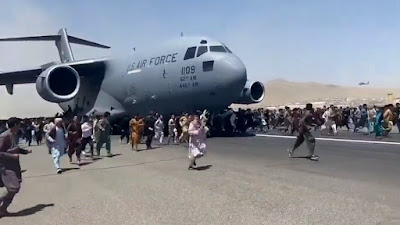 Here is what I assume is an all too familiar image from this past week. Here we see Afghans fleeing their homeland to escape violence. Now, I’m not gonna get into why the violence has been there, is there, and will continue to be there. I’m not gonna get into who’s fault it is. Like many of you, I’ve been trying to make sense of this for the past twenty years and I’m no closer to that than when it started. What we have here is simply another modern example of violence that we humans choose to inflict upon each other.

The next opened seal brings the black horse, and in its rider’s hand is a scale, a scale used to measure out grain for purchase. So which rider is this? The scale kind of puts you in the mind of justice, doesn’t it? And I don’t think you’d be that far off. Because what comes next are some seemingly strange words from the crowd. One of them says, “A quart of wheat for a denarion, and three quarts of barley for a denarion, but don’t damage the olive oil and the wine.” At first glance it sounds like one of them got into some wine! But no, what we have here is a description of the haves and have-nots.

A denarion is equal to a days wage, and a quart of wheat can feed one person for one day. So, if you had a family, I guess they’re not eating, let alone anything else you might need to live. And barely, is an inferior source of food, which is what you’d have to buy at these prices. But let’s not forget the olive oil and wine! The reason that it’s not to be damaged? Because olive oil and wine were only for the rich, and of course, they will be cared for. As it turns out, this is not the rider of justice, this is the rider of inequality. 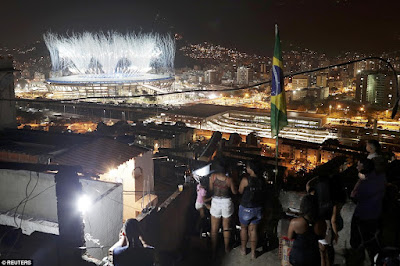 Here we see the poor in the slums of Rio, watching the opening of the Olympic games, if ever there was an image of inequality! Just imagine the money that the local government put into that stadium and those games, in the midst of the starving poor all around them. 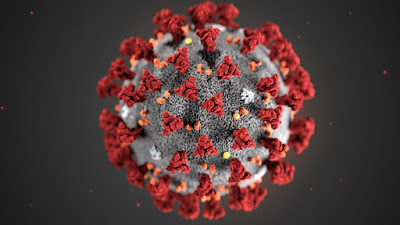 The fourth opened seal brings the pale green rider, and his name is Death, and the grave follows behind him. It seems like there isn’t much to say about this rider. Too many of us have known death all too well. But just when we think we’ve experienced all that death has to offer, death decides to get his creative juices flowing once again.

Ok, so the danger that I spoke of before, in thinking this book is all about the future, is missing the stark reality that the four horsemen of the apocalypse have already arrived! They’ve been here! For a while! And they’ve never left! But that’s not the worst of it. The worst part is our participation, our cooperation, with the four horsemen of the apocalypse. That is what I believe the author is trying to warn us about. Not just that terrible things were in our future, but that we have a choice of whose side we’ll be on when they happen.

Then the author takes a break from the opening of the scroll’s seals, almost as if the author can sense that we need a break, we need a breather, that we may be on the brink of despair after seeing the four horsemen of the apocalypse. Because it would be easy for us to see them and give up here, and not even be interested in the other three seals, because it looks like we're doomed anyway even without them! I mean, I did warn you last week that death and destruction were on the horizon, but holy smokes. This is a lot! 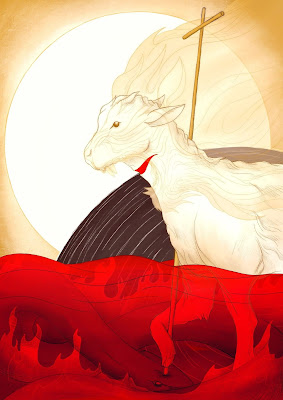