So, we made it to the big finale in this four-week series on the letter of Ephesians. Next week we start a five-week series on another letter, that we’ve come to know as the book of Revelation. I’m super excited about that! I’m not sure how excited Amanda was to hear that not only was she gonna have to preach on Revelation but she gets to kick off the series with you but she’s a trooper and I hope you both have fun with it. It’s a fascinating letter that has been sorely misunderstood and misinterpreted. In fact, it may even be a bit of a letdown when you find out what it’s really about. But I’m getting ahead of myself once again, that and I’m kinda jealous that she gets to start that with you. Anyway, let’s wrap up this letter to the Ephesians.

It’s been a short little jaunt through this letter but as you’ve seen, there’s been a lot packed into it for us to digest. Real quick, for those who haven’t been able to be with us each week; week one was all about our adopted identity as God’s children; week two was all about how that adopted identity put us all on a level playing field with everyone else; and last week was all about how we are called first, to do God’s will in the world, and then we are equipped to do it. So, now the question remains, equipped to do what? Which brings us to this final reading, and the answer is: equipped to go to war! I told ya, you’d never guess where this was all headed! War! Into battle! Armor and all. But with a bit of a twist, which by now, should be par for the course for you all by now. 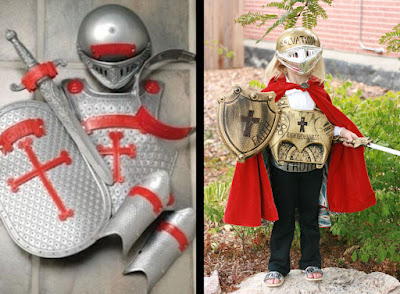 Before we get world war three though, this passage has been either loved by Christians over the years, or absolutely despised. The militaristic nature of this passage has just been to much to handle for many, seen as contrary to the peaceful nature of Christ’s good news. More than that though, I think the rejection of this passage has been more about how much conservative Christians absolutely love this passage. I remember back in the Nineties, conservative Christian bookstores, like Lifeway, sold these children’s costumes called the Armor of God. Now, I totally get this as a marketing tool. And if you were one of those who bought this for a child or grandchild, I absolutely understand the appeal here. It looks fun. It’s “biblical.” It was a genius idea. Did it teach what this passage was really about to the children who wore it? Well, probably not. In fact, probably the opposite!

Unfortunately, many Christians have taken this passage and completely taken it out of context to serve their own purposes. To use it to attack people who don’t believe or behave as they do. To ostracize and shun groups of people who don’t measure up to their standards. To justify the horrible atrocities that have been committed by the church to the marginalized of society. Or, on a much smaller scale, many see this passage as a call to argue and debate whose right and wrong about God, as a call to point out people’s errors and misbehaviors, under the guise of “loving” them. Now, to be fair, the challenge for us today is gonna be to not fall into these same patterns, these same behaviors based on those misinterpretations. Because it’s easy to do, it’s so easy to attack others and convince ourselves that it’s all for God’s will.

However, we can’t escape the call here to war, the call to battle. So what do we do with that? What does it all mean? Is this author contradicting the teachings of Jesus? No, I don’t think so, and for three reasons. One, the author explicitly states that our fight is not against human enemies; two, the armor that the author speaks of is not our own, not of our own making, but is God’s armor that we are called to pick up and put on; and three, the author is clearly speaking in metaphor, going so far as to tell us what each of the pieces of armor stands for! It’s really quite silly that this passage has been distorted so but it just goes to show you that people will make the Bible say whatever they want it to say. And no one is immune to that, and we must all remain vigilant against that habit, which is where the armor comes in!

So, let’s take a look at this armor we are called to pick up and put on. The belt of truth, the breastplate of justice, the shoes of peace, the shield of faith, the helmet of salvation, the sword of the spirit which is God’s word. I don’t know whether to look for Wonder Woman or King Arthur when I read this! Whoever this author was, he could’ve made a career out of merchandising! Let’s not get sidetracked here though. When you drop the fantastical imagery, you are left with truth, justice, peace, faith, salvation, and the Spirit which is God’s word. Those are the pieces of God’s armor that the author calls us to pick up and put on, to go into battle with. Against who?

Well, the author makes a few references in this regard: the tricks of the devil; rulers, authorities, and forces of cosmic darkness; spiritual powers of evil in the heavens; and the flaming arrows of the evil one…Oh, that’s all? And we thought this was going to be tough! You’ve gotta laugh because what kind of a reaction did this author expect to get?! I think I’d rather just get drafted into WWIII! Tricks of the devil? Spiritual powers of evil? Flaming arrows? Forces of cosmic darkness? This is either a really bad joke or a trailer for a really good video game! I mean, come on! This is what God is drafting us for? This is what God expects us, little ol’ us to battle against? What in the world do we do with this?

Well, first of all, last week I told you that if God calls you then God will equip you so, I guess God sees you all as a bunch of fierce warriors! Now, aside from that probably scaring the hell outta ya, take it as a compliment! But more importantly, don’t lose sight of the promise embedded here, the promise to equip you for the battle ahead. But the battle! What is this battle? Who or what is it against? How are we to fight? The fact that we are called to pick up and put on God’s armor speaks volumes in and of itself. It tells us that following God, answering God’s call, leads to an uneasy path, a path that will include conflict. Partly because God’s ways are often contrary to our ways. They will go against our human instincts. And so, sometimes the battle will be with ourselves.

I know, not very exciting is it. And to be honest, I was just as surprised to write that as you are to hear it. And possibly disappointed? I was expecting something a little more adventurous than a battle with ourselves, especially after all the exciting armor! But as exciting as flaming arrows and forces of cosmic darkness are, those too are merely metaphors for what we are really battling. For some help with this, let’s take another look at what the armor represents: truth, justice, peace, faith, salvation, and the Spirit which is God’s word.

I believe that this war, this war that this author is calling us to, is against all these things: falsehoods, prejudice, distress, mistrust, condemnation, and misinterpretation of God’s word. Now, does that mean that we will at times be at odds with other humans. Yes. I don’t’ see any way around that. But we are not called to make other humans the target of our battles. But instead these things that the author mentions are our true targets in this world. The world in which we are called to bring truth, justice, peace, faith, salvation, and the Spirit which is God’s word. These are the gifts we are called to bring into this world. And not with timidity! But with strength! With resolve! With boldness!

Because the opposites of each of these gifts, falsehoods, distress, misinterpretation, prejudice, all of them, do not come into this world with timidity! They come with force! They come like an invading army! They come like a plague! And if we are going to successfully fight them than we have to come at them with equal vigor, as the fierce warriors that God sees in us! Fierce warriors who remember that we have been adopted into God’s family, and as such are better than no one else, fierce warriors who, having been called, or drafted as this author might have said, we will be equipped for the battle ahead, for the battle within. So, go with my fervent prayers of protection, as you raise your shields, and draw your swords, my friends. God goes with you. God goes with you. Amen.