If you’ve come here expecting a sermon on how the Sabbath is a day of rest and leisure or a time to worship and strengthen your relationship with God, then you’ve come to the wrong place. But before you turn your screen off, I know, you’re probably thinking, “Pastor, give us a break for crying out loud! Why do you gotta ride us so hard!” If it makes you feel any better, and it probably won’t, but I too was surprised at the sermon that I ended up writing. I too am in need of some rest. I too wonder when God will just let up a bit. I read this passage and thought, finally! We get to talk about rest and relaxation! Only to dive deeper and remember that this is not what God meant for the Sabbath. Oh well, it was a nice thought while it lasted.

So, before we talk about this story from Luke, we should remind ourselves of how it all began in the first place. And for that, we have to return to the Hebrew scriptures. Now, before your eyes glaze over, just bear with me, I’ll try to keep this short and sweet. The seeds of the Sabbath first get planted way back at the first creation story, when God rested on the seventh day—which is probably where we first associated Sabbath and rest. If God can take a day off why can’t we have our barbecues and a beer on Sunday, right! Well, not so fast.

Fast forward to Mt. Sinai where God is giving the Ten Commandments to Moses. One of which is of course, “Keep the Sabbath day and treat it as holy, exactly as the Lord your God commanded: Six days you may work and do all your tasks, but the seventh day is a Sabbath to the Lord your God. Don’t do any work on it—not you, your sons or daughters, your male or female servants, your oxen or donkeys or any of your animals, or the immigrant who is living among you—so that your male and female servants can rest just like you.” And then the author adds a very interesting connection and wrote, “Remember that you were a slave in Egypt, but the Lord your God brought you out of there with a strong hand and an outstretched arm. That’s why the Lord your God commands you to keep the Sabbath day.” Hmmmmm, interesting. So, even then, the Sabbath wasn’t just for the Jewish community, and, the reason for it has connections to their slavery in Egypt. Hmmmmm. We can’t stop there though, we gotta keep moving.

Later in the Hebrew scriptures we find out that the Sabbath didn’t only apply to the seventh day but also to the seventh year! Every seven years they were commanded to observe the Sabbath by forgiving all debts, as well as, freeing all slaves! But it didn’t end there! Every seventh seventh year, meaning seven times seven, the forty-ninth year, all land was to be returned to its original owners, and a year long festival of Jubilee, as it was called, was to be celebrated! Ok, so, clearly, the Sabbath, was way more than, was farther-reaching than, simply a day off every week, right! The Sabbath was about bringing life, a burst of new life into weary old bones. Whether those bones were seven days weary, seven years weary, or seven times seven years weary! Whether those bones were your bones or your neighbors bones, it didn’t matter. Wherever a burst of new life was needed, it was commanded. See, I told you I’d keep that short and sweet! Now, let’s turn to our story from Luke now that we have all that in mind.

By the time we get to this time period, the Jewish elites have taken the idea of Sabbath and ran with it! And by “ran with it” I mean, ran it into the ground. In their defense, they did with it what any group of humans would have done with it, and if we’re honest, what we continue to do with it. But more on that in a sec. Luke’s first story in this passage is of Jesus and his followers minding their own business, walking through a field of wheat, like their filming a breakfast cereal commercial, and they can’t even do that without getting into trouble! They get accused by the Pharisees, the religious elite, of breaking the Sabbath. Jesus then reminds them that even King David broke the law by eating the temple bread when he was starving. Did Jesus just say that rules were made to be broken? Hmmmm, let’s keep going. 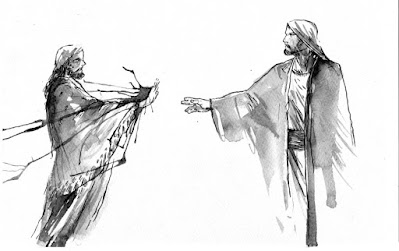 Next, we find Jesus on another Sabbath, at the synagogue where he comes across a man with a withered hand. Jesus knows that all eyes are on him, watching to see what he’s gonna do. So, he asks them a question, “Is it legal on the Sabbath to do good or to do evil, to save life or to destroy it?” Without waiting for an answer, Jesus tells the man to stretch out his hand, and it was healed, answering the question for them. Because Jesus knew what the Sabbath was all about. Not only did Jesus know his Bible but the Christ was there when the Sabbath was first created! There was no need to lecture Jesus about the Sabbath! But they did anyway, and so, he showed them what Sabbath looked like. It looks like life, a burst of new life, in tired old bones. It wasn’t about time off, or a day of leisure, and it certainly wasn’t about being the Sabbath police, handing out tickets to anyone who wasn’t observing the Sabbath.

Jesus didn’t observe the Sabbath—as if it was something to be witnessed, as if it was something to be watched, as if it was something to passively behold—Jesus didn’t observe the Sabbath. Jesus lived it. Jesus was the very embodiment of the Sabbath. And Jesus calls us to do the same. And not just as recipients, though that is certainly important, but Christ calls us to be deliverers of Sabbath as well—bringers of bursts of new life, to tired old bones, no matter how old, whenever we come across them. Saint Ambrose, one of the great early-church theologians, shared this about this passage from Luke, writing to his own readers, “You heard the words of the Lord, saying, “Stretch out your hand.” But you who think that you have a healthy hand beware lest it is withered by greed or by sacrilege. Hold it out often. Hold it out to the poor person who begs of you. Hold it out to help your neighbor, to give protection to a widow, to snatch from harm one whom you see subjected to unjust insult. Hold it out to God for your sins. The hand is stretched forth; then it is healed.”

Like Jesus, Saint Ambrose knew that the miracle in this story wasn’t just in that withered hand but also in the hearts of all those who witnessed it, who got to see first-hand what the Sabbath really looked like, who got to experience the Sabbath, the real Sabbath, for the first time, in ways that they were never taught before. Now, some of those who saw this walked away angry and bitter that day. And before we judge them too quickly, we must remind ourselves that their whole world was being rocked by Jesus, causing them to question things they’ve never questioned before, doubt truths they thought were solid truths, rethink their entire theology. That’s a tough place to be in. Not everyone is ready for that right away! That is scary, shaking ground to stand on! God knows we’ve had our share of people leave us for more stable ground! I’m sure most of you know what that journey is like, as your theology has changed over the years, as your perspectives have changed, as your ideologies have changed. It can be a tough road but it’s a road that many of us take because it’s a road that brings new life to the tired old bones of this world, it’s a road that brings grace, it’s a road that brings Sabbath. 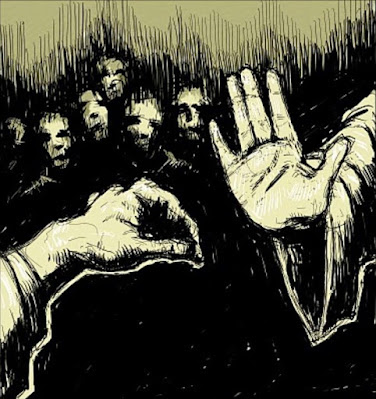 So, there were those that left angry and bitter and then there were those who followed Jesus with a renewed, emboldened, passion to not only receive the Sabbath in a new way but to be the Sabbath for others, as they continually saw Jesus demonstrate time and time again right before their eyes. Those who followed Jesus had their own metaphorical withered hand healed and restored, healed from whatever was hindering their path with God, healed from whatever chains were holding them back, and were now ready to use it to bring new life into the world with Jesus. That is their story, and it is ours as well, as we continue to stretch out our own withered hands, to be healed of whatever hinders our own journey with Christ to bring life into this world, ready to bring Sabbath to whoever may need it: those who are hungry, lonely, persecuted, treated unjustly, or who, like us, may just need a break. Thanks be to God. Amen.
Email ThisBlogThis!Share to TwitterShare to FacebookShare to Pinterest
Labels: action, break, hand, jesus, justice, law, live, love, luke, observe, rest, sabbath, sermon, synagogue, withered