Once again we have hit the fast forward button on this great narrative of God and God’s people. Last week we read about the big promise that God gave to David that God would indeed keep his throne intact for all eternity, little did anyone know that God was referring to the royal throne of Christ, but God knew, and we eventually got the memo. After this it was a roller coaster of kings, some bad, some not so bad. After David died, his son Solomon took the throne, and ended up building that temple that his dad wanted to many years before. Unfortunately, Solomon was not able to keep the kingdom intact and upon his death the kingdom split in two with a king ruling the northern tribes of Israel and a separate king ruling the southern tribes of Judah. The author goes on to give us little snippets of each of the succeeding kings, a little snapshot if you will of their time on the throne. And then the author gets to king Ahab and says, “In the thirty-eighth year of Judah’s King Asa, Ahab, Omri’s son, became king of Israel. He ruled over Israel in Samaria for twenty-two years and did evil in the Lord’s eyes, more than anyone who preceded him.” This is the Biblical way of introducing a character with, “Dun dun duuuun!” So the hits just keep on coming for these people, with each king being worse than the last one!

The author then abruptly changes direction and without the usual introduction to a major character, in walks Elijah onto the scene. Remember when Samuel was introduced? We got his whole backstory, including his conception! And as I mentioned before, that was how you knew this was about to be a major character in the narrative that was gonna go on to do big things! But with this new prophet, Elijah, we get none of that. The author just plops him right into the narrative without so much as a segue. What we do get however is equally interesting, and I’d argue, even more profound than some miraculous conception story. So let’s dive right into this story and see if we can’t figure out why the author chose to introduce this new character of Elijah in such a different way.

The chapter starts out with Elijah telling the evil king Ahab, in a cautionary if not altogether threatening way, that a drought was coming. God then tells Elijah to go hide in the desert and that he will be taken care of by a babbling brook and ravens. We will talk about who the ravens were at the Wednesday evening Bible discussion, spoiler alert, they were not from Baltimore. Now, why did Elijah need to go and hide? Well, probably because he had just threatened the king and his kingdom, and it probably didn’t matter to the evil king that this message was from God. Don’t shoot the messenger wasn’t a thing then apparently. So, God comes through as God always does and makes sure that Elijah is taken care of for a while, but the brook eventually dries up due to the drought and so Elijah finds himself without water and we all know that you can’t go that long without water. So, God tells him to go to a nearby town and that a widow will take care of him there. Keep in mind that this is the way that the author is choosing to introduce this new character to this narrative! Not very impressive to say the least! We as the reader don’t get the sense here that this guy is anything special or will do anything of significance in the foreseeable future! But, let’s keep moving.

Elijah does in fact find a widow there but it’s not just any widow, it’s a poor widow, meaning, one that had not had a male advocate to care for her upon the death of her husband, as was the custom of the day. Worse yet, she has a child, a boy who is not only too young to care for her but as we will learn in the next scene, he is not a healthy child. So, this widow is having a hard time of it to say the least. When he meets her, he finds her gathering sticks, but he’s parched and hungry, so he asks her for some water and for some bread. She then goes on to explain that she is collecting sticks so that she can make her and her son their last meal before they die of starvation. Elijah then gives one of the coldest responses recorded in the Bible and tells her to go make it for him anyway! But before we even talk about that we have to pause here and take a look at what is really going on. Because at face value this looks just like a small tangential story, as if the author just kind of started rambling with his quill. But this is no tangent.

What we have here is a set-up…of the literary kind. What the author is doing here first is establishing just how bad things have gotten under the leadership of the evil King Ahab. And yes, I’m gonna keep calling him evil king Ahab because, one, it sounds more dramatic that way, but two, he was quite literally the worst! So, he deserves it! Anyway, The author here is giving us a real-world example of just how evil this king was. Now, if we had been reading through this book from the beginning, you might be thinking, “We already knew he was evil, he’s been worshipping other gods! But this story makes that sin, real for us. This story shows us what evil leadership does to the people on the bottom of that evil leadership—all the way down to one poor widow and her sick son. You know the way modern politicians will highlight a super sad story of an individual to make you feel motivated, outraged even, for a particular side? They’ll even bring them to rallies and conventions and point them out! That’s exactly what’s going on here! But don’t let that be a turn off for you, it’s an effective technique! Which is why politicians still use it!

Even in that day, long before the Bible had been assembled, one of the core beliefs of God’s people was supposed to be the care of widows, orphans, and the poor. This had been spelled out to them by God for generations. Kinda like that old 60’s camp song “They Will Know We Are Christians By Our Love.” Remember that oldie but goodie? Only for them, it would have been, “They Will Know We Are Jews By Our Care For Widows, Orphans, and the Poor.” Not quite as catchy but it gets the job done. Not only was this supposed to have been ingrained in them, but it was also a great barometer for how they were doing as a nation. If they had a lot of poor or widows and orphans that were not being cared for, it reflected directly on the nation’s leadership, in this case, evil king Ahab. And that is what the author was trying to get at here. Evil king Ahab was not living up to what a king should be, what a follower of God should be, let alone what a decent human being should be. And Elijah was coming to set things straight. But first, Elijah needed some credibility of his own. You can’t just walk into the king's palace without the proper credentials! Who’s going to take you seriously, let alone listen to a word you say?

This is where this odd way of introducing Elijah to the reader comes in. It wasn’t in a miraculous birth story that Elijah would gain the credentials to be one of the most influential prophet’s of God in the Bible. No, it was going to be what he did as an adult that would set him apart, or should I say, what God did through him. What follows is the widow making him that bread even though it was the last of her ingredients that she had to keep her and her son alive for another day. But instead of dying shortly afterward, every day when she went to the cupboard for ingredients to make another loaf of bread, sure enough, there was enough. This went on for quite some time, and every day there was enough for them to eat. 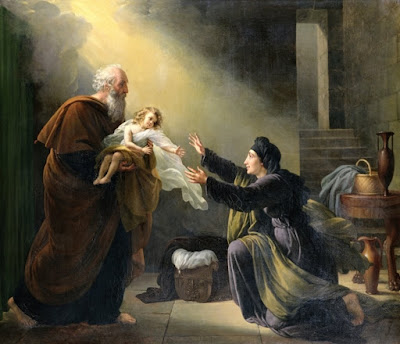 Then tragedy strikes again. The food wasn’t enough, and her son eventually dies of whatever was ailing him. But, as you may have guessed, this death wasn’t the end of the story. As Walter Brueggemann beautifully put it, “for it is the word of the Lord that vetoes circumstance, and guarantees abundant life.” As if Elijah was giving a sucker punch to all that was wrong in the world, Elijah brought that boy back to life and back to his mother! Cuz he’d be damned if he was gonna let evil king Ahab win the day! And if you remember what follows in this narrative, whoa, Elijah was just getting started! Evil king Ahab didn’t know what coming his way! Especially now that he had the credentials to do what needed to be done, to begin to right the wrongs of the leadership of evil king Ahab. Now, people might listen and follow what Elijah had to say.

On All Saints Sunday we remember the saints, both those who have died, as well as current followers of Christ, us. Though we don’t like to call ourselves saints out of humility, the Bible does, and so this day includes us as well. And on this All Saints Sunday, this story got me thinking of the many people in our lives that we have chosen to listen to, that we have allowed to influence us, based on the credentials they bring. And by credentials, I don’t mean a degree or a certificate. By credentials I mean their willingness to follow the ways of God, the guidance of God, thereby helping to make this world a bit closer to the way it was intended to be. I have a feeling you are already thinking of people like that who have graced your life over the years. I bet you are picturing their faces right now. I’d encourage you to not only think of those who have died but also who are still living and have that influence on your life. Have you told them, thanked them? These days we can all use words of encouragement. If you haven’t already, maybe now is the time to let those people know the impact that they have had on your life, and the credentials of which you are in awe of.

This All Saint’s Sunday is certainly different, isn’t it! But that doesn’t mean it has to lose any of its power! Like that poor widow who was ready to die with her son, or Elijah who thought the king would surely kill him, if the wilderness didn’t get him first, or the widow’s son who thought he had died without the chance to grow up and care for his mom, our story is not over, just like theirs wasn’t. No matter how bad things get, no matter how hopeless, no matter how unfair, our work remains the same as it always has, since the days of Sarah and Abraham and Hannah and Elijah, to care for those around us, especially the most vulnerable, even when, especially when, the powers that be do not. Because God isn’t done writing this story. Thanks be to God. Amen.