We continue our journey with Job this week, our distressing journey with Job. But he hasn’t given up completely yet, and so we won’t either! At Wednesday’s online Bible discussion we talked about how difficult it is to read a passage like we had last week and try to come up with some inspiring positive words to say about it! It can certainly be challenging, but I think we did ok last week. Keep in mind that we are only midway through this series and so each week we will have varying degrees of good news to find. Some will be difficult to find any good news, and some a little easier, like today's. We have two passages that I read from today, one from chapter fourteen and one from chapter nineteen. You may remember that most of this book, is a conversation between Job and his friends, as well as a one-way conversation of Job to God. God only speaks at the very beginning of this book, and the very end, which may be its own lesson in and of itself.

In the two chapters that I read from today, there is a mixture of Job speaking to his friends at some moments, and Job speaking to God at other moments, and then there are these moments when Job seems to be thinking out loud. I imagine him almost delirious with grief and pain and not even knowing where to direct his thoughts and complaints. If this were a scene in a movie this would be the moment when someone smacks him in the face and tells him to get a hold of himself! However, I’m glad that no one does that, that no one stops his rambling, because these moments when he sits there thinking out loud are when he does some of his most profound thinking. It’s in these moments when he ponders things that only philosophers wrestle with. It’s in these moments when he allows his imagination to run wild, wild with hope, wild with a future, wild with life, a life he can only glimpse in his imagination right now. It’s in these moments that hope begins to sprout, from deep, deep within him, when hope begins to try and break through the hard shell that has formed around him, like a duckling that is desperately trying to be born. And all this happens thanks to Job’s imagination. 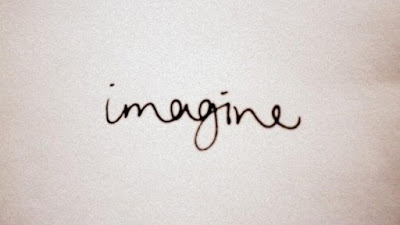 First, we hear Job, out of the blue, without any satisfying segue, talk about trees. He’s really struggling here! I’m picturing him sitting there in his ashes, pondering his own hopelessness, and looking up momentarily and his eyes just happen to notice a nearby tree, and he blurts out, “There’s hope for a tree.” Now, this might sound like rubbish to his friends but could it be, that something deep inside him, is trying with all it’s might, to get hope to sprout? Almost as if he’s doing a word association exercise where someone showed him a picture of a tree and told him to say the first word that comes to mind and he says, “hope.” Maybe it doesn’t even make sense to him, but you and I get this opportunity to imagine what is going on in his heart as he tries to process all that has transpired.

With a tree’s ability to sprout even after it has been felled still fresh in his mind, Job quickly turns his attention to humanity. He says “But a human dies and lies there.” You can practically see his heart trying to make that connection for him, trying to get him to connect the dots, rooting for him to realize just how valuable Job is to God if a tree is! And we as the reader are rooting for him too! He’s so close to a breakthrough here we can taste it! He asks, “But people die, and where are they…will they live again?” Bingo! He asks the question that we’ve wanted him to ask for so long now, especially because we know the answer! But I have to pause here and point something out, because modern readers of this story overlook just how significant this question of his is. In the ancient Hebrew mind, there was no concept of life after death. For them, death was final. It was a ceasing of all of life’s hardships and turmoils. It was the ultimate rest, the ultimate sleep. So, to think that there might be something afterward, was not only odd, it may not have even been a pleasant thought for Job, like it is for many of us. But aside from that, the point here is that Job here is imagining something more, imagining something beyond, even to the point of imagining a new relationship with this God that he only can seem to be at odds with right now. And it’s in this imagining, as silly as it may have sounded to his ancient Hebrew mind, that hope begins to sprout, that hope begins to break through.

But Job’s not quite ready to go there yet. He dismisses this idea as quickly as he imagined it. The God that he knew at this point is a destroyer of people’s hope, as he put it. And so we move on from here and into chapter nineteen after a few more back and forths with his friends, and a prayer to God that goes unanswered, and in this chapter we find hope beginning to rekindle in his imagination once again. In probably the most quoted verse from Job, maybe of the entire Bible, Job says, “I know that my redeemer lives, and will rise upon the dust.” Job imagines someone coming to his rescue. And who is this redeemer of Job’s? Hold on a sec before you say it’s Jesus! How would Job answer that question?

Unfortunately, many translations capitalize the word redeemer, making it a proper noun. In the original Hebrew, it was not. It’s simply the word redeemer, in Hebrew, ga’al. The term ga’al was actually a legal term. A person’s ga’al was usually a family member whose legal responsibility it was to rescue another family member from some predicament they were in. They would be their advocate, would plead their case for them. For instance, if you were sold into slavery, a family member could come and buy your freedom and be your ga’al, your redeemer. Or, a ga’al could be someone who marries a widow in order to provide an heir for her dead husband. Or, a ga’al could be someone “avenging the blood of a murdered relative”, or even someone “buying back family property that has fallen into the hands of outsiders.” So, in Job’s mind, who was he expecting to come to his rescue? It’s hard to imagine him thinking it was a friend or family member because his relationships with them aren’t very good right now. It’s equally hard to imagine Job’s ga’al, Job’s redeemer being God at this point in the story, they can’t even have a two-way conversation right now! I honestly don’t think Job had any idea who his redeemer would be.

For Job, this was a mysterious figure, and I kinda like that! Remember, we are operating within Job’s imagination here, and Job is imagining someone, some mysterious figure, to come and rescue him, to be his ga’al, to be his redeemer. And it doesn’t matter who it is to Job. What matters is that he is finally able to imagine something beyond his current predicament. What matters is that he is finally able, through the use of his imagination, to see a future, as fantastical as it may be to those around him, he is able to imagine life ahead of him, in some way, in some form, in his mind’s eye, and that is allowing hope to finally sprout, to finally break through, even if it’s fleeting. And most of all, it’s keeping him from completely giving up, which is what faith is all about.

So, as I contemplate Job’s use of his imagination, and the way he uses it to cultivate hope where there was none, I can’t help but think of how we do that same thing today. In spite of the hopelessness we often find ourselves in, we imagine a better tomorrow, we imagine a way out of this, we imagine, with our mind’s eye, a world where today’s challenges, where today’s heartaches, where today’s pain, is a distant memory. Because I believe that unless we can imagine it, it can’t come to fruition. History has shown us this time and time again through the various movements and their leaders over the centuries. When I contemplate Job’s imagination I can’t help but think of leaders like Dorothy Day who imagined a world where women had equal rights, or Dr. Martin Luther King and how he imagined a world without racism, or Marsha Johnson who imagined a world where the LGBTQ+ community could have equal rights. These iconic figures sacrificed so much for their causes but what I want to highlight today is their imaginations, because without their ability to imagine a better world, it could never be so.

And so I ask you, dear listener, what do you imagine? What does your future world look like? And when was the last time you shared your imagination with others the way Job did? Could Job’s imagination will something into existence? Is our imagination that powerful? I have to believe that it is. For it is there that hope springs. So, my friends, my family, imagine with me. Let’s see what happens when we imagine. Amen.