So like last Sunday, today we get another glimpse into the birth and life of one of Christianity’s first congregations. Last week we took a look at the first church in Thessalonica from Acts chapter seventeen, and today we are in the city of Corinth from the eighteenth chapter. We don’t know exactly how much time passed between Paul’s visit to these two cities, but we do know that he visited Athens on his way to Corinth. For those of you interested, Corinth was a big city hub that connected the northern and southern regions of Greece. If you wanted to do any kind of business in Greece, even religious business, you’d be a fool not to go there. It’d be like trying to start a tech company and ignoring silicon valley. Which may be why Paul had the reaction he did in his letter to them, what we’ve come to know as First Corinthians, but we’ll get to that in a moment because like last week, we will get to fast forward and check in on this church with Paul. 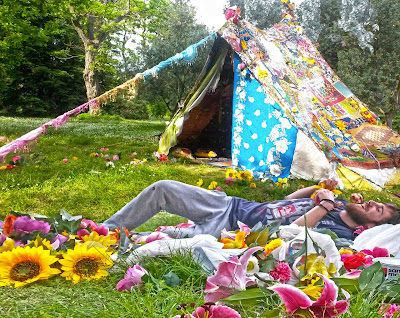 In Acts, however, we get this very peaceful scene as Paul begins to make connections with the religious folk of this city. He doesn’t begin by doing some heavy-handed preaching, but rather, he begins working with them, side by side, making tents. Now, I don’t’ know about you, and maybe this pandemic is getting to me, but in my head, this is one of the hippiest scenes in the Bible. I mean, tent-making? I’m picturing Paul in dreadlocks, wearing his very first-century linen garb, sitting in a circle with his new friends, all singing kumbaya, while they make their tents. Again, I might be suffering from pandemic-brain so cut me some slack here. Whether or not you see the same thing when reading this, it is important to recognize the peaceful nature of Paul’s first interactions with those Corinthians.

And before we move on, I feel it necessary to point out what I think made his time there “successful.” And I put successful in quotes because by the end of this, you may or may not find Paul’s Corinthian venture a success, but I don’t want to spoil anything just yet so let’s keep pace here. What I think gave Paul an edge with these first Christians in Corinth was his time making tents with them. Later in the chapter, Luke writes that it wasn’t until Silas and Timothy join him that he really puts his preaching into overdrive. But up until that point, he just works with them. Good ol’ fashioned manual labor. He found something in common with them, in this case, the tent-making trade, and simply worked with them, and got to know them in the process, connected with them.

Now, some might see that as a bit manipulative. I’m not going to pretend to know the mind of Paul, and I wasn’t there, but I’m gonna choose to interpret his actions in the best possible light. I think he was just being a nice person, and getting to know people. I mean, that’s what we’re called to do as Christians right? Be nice, make friends, get to know people where they are? And I think that’s what made his ministry so effective when it finally came time to tell them about Jesus. Did it work on everyone? Of course not. But for those it made an impression on, Paul was able to start a church with. But things didn’t stay so serene and hippie-like for long. Singing kumbaya with each other soon became a thing of the distant past.

Fast forward to who knows how long into the future and Paul is not hearing things about this church that he founded that he necessarily likes, to put it mildly. Since he left Corinth, he’d been to Antioch, Galatia, Phrygia, and is in Ephesus, where he is inspired to write to the church in Corinth. But this is not the same peace and love, kumbaya Paul that they once knew. The dreadlocks are now gone. No, seriously, he stopped at a village on his way out of Corinth and got a haircut! I’m not making that up, don’t look at me like that, Acts 18:18, look it up! Anywho, the Paul that writing to them now, was not a happy camper. He was mortified at what he was hearing about this baby church in Corinth, and babies are exactly what they were acting like! What was once a peaceful community, was now engaged in squabble after squabble!

Let me read to you a short selection from the opening chapter of that letter, “Now I encourage you, siblings, in the name of our Savior Jesus Christ: Agree with each other and don’t be divided into rival groups. Instead, be restored with the same mind and the same purpose. My siblings, Chloe’s people gave me some information about you, that you’re fighting with each other. What I mean is this: that each one of you says, “I belong to Paul,” “I belong to Apollos,” “I belong to Cephas,” “I belong to Christ.” Has Christ been divided? Was Paul crucified for you, or were you baptized in Paul’s name? Thank God that I didn’t baptize any of you, except Crispus and Gaius, so that nobody can say that you were baptized in my name! Oh, I baptized the house of Stephanas too. Otherwise, I don’t know if I baptized anyone else. Christ didn’t send me to baptize but to preach the good news. And Christ didn’t send me to preach the good news with clever words so that Christ’s cross won’t be emptied of its meaning. The message of the cross is foolishness to those who are being destroyed. But it is the power of God for those of us who are being saved.

Now, I know, it’s hard for you to relate to this, it’s hard for us to even imagine people at church fighting, right! Inconceivable! But there they were, fighting over everything from marital issues to eating meat that had been sacrificed to idols! And in his opening words of his first letter to them, it’s a fight over competing loyalties that has them all out of sorts. Throughout the letter, he will address many issues that are going on in their church but first and foremost, he needs to get them on the same page where their loyalties are concerned. For some reason, they got it in their heads that it mattered how they first came to this new faith, specifically, who they came to this new faith through. Some were claiming allegiance to Peter, others Apollos, others Jesus, others Paul. And apparently, who baptized them gave them some sort of clout over others. In other words, those who were baptized by Paul may have thought they were more important than those who were baptized by Peter, or vice versa. It was seriously getting ridiculous and Paul set out to correct them with this letter. And for a new religion, they could not afford for the world to see them fighting!

So, what do you do, when things go from being peaceful and serene, to chaos and conflict? We wouldn’t know anything about that, would we? Whether it’s a church split or a pandemic, or an unexpected death, or job loss—life has a way of turning from peace and serenity to chaos and conflict faster than you can say Christ is risen! And when it happens it can be so disheartening! Enough to take the wind right out of you. Things were going so well, and then bam, the world around us is unrecognizable, or sometimes it’s you that’s unrecognizable. What do you do then? Well, I think Paul’s words in his letter to them are helpful and wise, albeit a bit pollyannish. I mean, he does open by saying to “agree with each other and don’t be divided.” He knows we’re human right?

But when things do go south, whether it’s our own divisiveness, or when life just deals us a low blow, what can we do to get back some sense of normalcy? Paul encourages us to return to the core of who we are, and that core is Jesus. What unites us is not a doctrine or a place or a favorite pastor or theologian, it’s not a certain behavior or a sexuality or a gender or a shade of skin pigmentation—it’s Jesus. And when we forget that, it makes the chaotic times of our lives all the more chaotic. As a pastor, I find a lot of my work has been to make you ready for the next big storm that hits us. I know, that sounds a bit pessimistic, but if lightning strikes, and you all flounder not knowing what to do or where to turn, then I’ve not done my job. And I think that’s what Paul was trying to do with that first church in Corinth. Paul knew that their petty squabbling was only the tip of the iceberg of life that was headed their way. And if he didn’t prepare them for that, he took that personally.

Now, more than ever, we need to remind ourselves of what unites us, what feeds us, what guides, what keeps us from pulling our hair out, what keeps us from strangling our family that we are sheltering with, you get me meaning. It is Christ. It is Christ who is at our core, it is the ways of Christ that keep us balanced, it is the teachings of Christ that guide us away from chaos and despair—which is why it is Christ that our loyalty is called toward. Christ did not die on the cross so that we could go about our days, business as usual. No, we are called to die with him, and not just die but to rise as well, which means we are called to be transformed, to adapt under life’s uncertainties—or as I like to call it, to roll with the punches of life. Chin up my friends, this present chaos and conflict that we are immersed in, ain’t got noth’n on the power of Christ, as seen through his body in this world, us. Thanks be to God. Amen.