And I’m not just talking about food of course. We fast from the word Alleluia during Lent, and we cover our crosses too at that same time which the ancients used to call a fasting of the eyes, and we fast from Christmas songs during Advent, or we try at least, we sneak in some Christmas melodies here and there because we just can’t help it.

Not only that but waiting implies inaction. Waiting implies that you are holding back from doing something until what you’re waiting for actually happens. Waiting implies stagnation, a lack of movement, particularly forward movement. Not always of course but I think this can often be the case; which is why I think we need to rethink this whole waiting business. What if that’s just life? As John Lennon sang in his song Beautiful Boy, "Life is what happens to you while you're busy making other plans." If all we do is plan for the waiting to end, is that really living? Now, I know, easier said than done. Waiting can be so hard, and so consuming.

After waiting twenty years to become a pastor I certainly know firsthand how hard waiting can be. And those first few years were pretty tough let me tell you. I had to come to terms with why God was making me wait so long. And then it occurred to me that while I was “waiting” some pretty amazing things were happening to me. Like getting married, like having three daughters, like maturing into the person that my future churches would need me to be. All these amazing things and more helped me to forget I was even waiting for something in the first place—making becoming a pastor feel more like a surprise than something that had been stalling my life. Which brings me to our story for today of Elizabeth and Zechariah getting the news that they would have the baby they had prayed for so many years before.

Luke begins his Gospel by zooming in tight on this seemingly ordinary old couple. Zechariah was a temple priest but there were a lot of those by this time, hundreds in fact. Like a Lutheran pastor, they were a dime a dozen. Not only were they ordinary, they were old, well past their prime in the eyes of the world, meaning, nothing special was expected from these two. I imagine Zechariah being quite excited about being chosen to offer prayers in the temple, he would have been quite honored by that and taken it very seriously. And I imagine that over his long career as a temple priest he had done it before, when he was much younger, back when he was still praying for a baby for him and his wife Elizabeth.

But not this time. That prayer hadn’t escaped his lips in many years. So long that he had forgotten about it. In his eyes, their lives were coming to a close. They had lived a good life, in spite of what they lacked. You don’t’ hear him complaining. And then an angel appears to him while he’s burning incense in the temple and says, “Don’t be afraid, Zechariah. Your prayers have been heard.” In that moment, I wonder what Zechariah thought the angel meant by “prayers.” What prayers? His prayers for his people? His prayers for their livelihood? His prayers for Rome to be more merciful during their occupation of their homeland? Or maybe his prayers for a messiah to deliver them from Rome once and for all? Which prayers! It turns out, it was none of those prayers, instead, it was a prayer that Zechariah had forgotten about—his prayer for a baby!

A baby? He probably thought, “You gotta be kidding me? God sent an angel with jokes? God’s got that much free time these days?” We didn’t’ read this part of the story but Zechariah wasn’t even that excited about this news! He probably thought, “At our age, there are other more pressing needs; like back pain, or failing eyesight, or their retirement income!” He all but said no thanks to the angel's offer! Which didn’t go over so well with the angel but that’s for another sermon. But a baby is what they got, and Zechariah had nine months to come to terms with this surprise, and nine months is about how long it took him.

On the day of his new baby boy’s circumcision, it’s as though he had a revelation, an epiphany if you will, as if it all came together in his mind, and it was one question that sparked it for him. After the family heard the surprising news of what they were going to name the baby, surprising because it went against tradition, they asked, “What then will this child be?” That question seems to help him put it all together, it helped him realize that this whole story was so much bigger than him—that something else was at work here. How relatable is that? How many times in your life have you needed a reminder that the world doesn’t revolve around you? I’ve needed that a time or two, or three, nobody’s counting Sara! 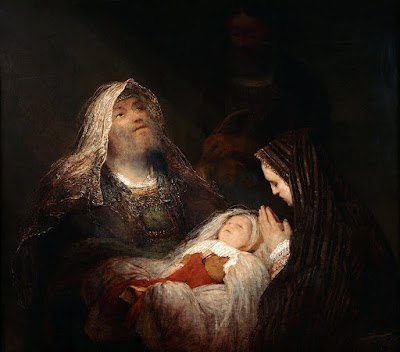 And so, old Zechariah, answers their question with a prophecy in song, because it’s almost Christmas so why not slip in a musical number here right! I picture him holding his new baby boy in his arms, his new baby boy that now has a name, John! And singing this song as if it’s a lullaby. He sings of blessings, and new hope. He sings of God’s mighty arm of protection. He sings of promises kept. I imagine him gazing into his baby boy’s eyes and singing of preparing the way for God’s salvation and mercy to come.

But he wasn’t just singing then to his new baby boy, that we’ve come to know as John the Baptist, he is singing still to this day, to us. The precious words of hope and promise and mercy are sung for you too dear children of God, as well as sung by you as you spread God’s Word wherever God leads you. So, while you wait, while you live, know that you are not forgotten, you are not alone, but that God works for you and through you, in the most surprising ways imaginable. Thanks be to God. Amen.