One of my family’s favorite movie genres is adventure movies, and one of our favorite subgenres of adventure movies is any movie involving a treasure hunt of some kind. Movies like National Treasure and Indiana Jones are two that come to mind. We love the history behind the stories, the crazy adventures, treasure maps, and the joy in trying to figure out the mystery before the characters do. And the fact that my family likes these movies also tells me that I’ve done something right as a parent. 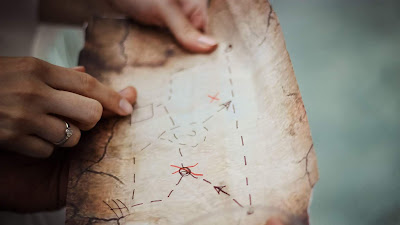 I remember getting a text years ago from one of my daughters as I was leaving work that said, “Hey dad, when you get home do you want to start the Indiana Jones movies with us?” I almost cried! I don’t know who I was more proud of, them, or me! Anyway, if you read today’s passage from Hebrews with the Indiana Jones theme song in your head, it sounds an awful lot like a treasure room, what with lampstands and chests and gold altars and a wooded staff that miraculously budded! Not to mention this secret hidden room at the center of the temple called the “holy of holies!” So mysterious!

It has all the makings of a treasure hunt movie! And in fact, one of these items did just that, the chest, also known as the Ark of the Covenant, was the basis for the first Indiana Jones movie. So, I couldn’t help but read this passage and think of it as a treasure hunt! Only this treasure hunt was for possibly the greatest treasure the world has ever sought after, God’s love and acceptance.

Since the earliest days of civilization, even before we began our infatuation with material wealth, back when we first dreamed of the existence of a god, we immediately dreamed of how we could earn that god’s favor. In general, we humans have always thought of ourselves as the greatest of all of God’s creations but in spite of our overinflated egos, we have always imagined that we had to earn or somehow acquire God’s love and acceptance, that God wouldn’t just give that away, that somehow a transaction had to occur to get it.

And if that transaction didn’t take place, then God would get even angrier than God already was, and punish us…to death. Now, I don’t know about you, but when you hear that said out loud, it’s easy to see why there are so many alternate theologies concerning how God loves and accepts us. The academic term for this kind of study is soteriology. And believe me when I say that it’s ok if you have one of those alternate views. They’re all biblical. It just depends on how you view God.

But for the ancients of our faith, it only made sense that God would demand payment of some kind and so a sacrificial system was soon put into place. They would sacrifice anything from plants and grains to the ultimate sacrifice of blood, meaning an animal of some kind. Some, like my own ancestors, the Aztecs, went so far as to sacrifice humans. But no matter the area of the globe, blood sacrifice meant they’re life for our life. That was just the way they saw the world, it was the only thing that made sense, and so it stuck.

Blood became the key to the ultimate treasure for humans. In the movies, there’s always a key of some kind, in addition to the map, a key is always needed to get to the treasure. And those keys can come in all shapes and sizes, sometimes in the unlikeliest of forms. In Raiders of the Lost Ark, the key turns out to be an ancient Egyptian staff. In the movie National Treasure, it turns out to be an old smoking pipe from colonial America. Here’s a short clip of that moment from the movie because, well, we can, so why not? Roll it, Shelby...


Who doesn’t love a good Nicolas Cage movie, right? Some of them are so bad they’re good! Anywho, just like the keys in a treasure hunt movie, our faith ancestors saw the sacrificial system as the key to God’s love and acceptance.

And then Jesus appears on the scene. And those who saw the divine in Jesus, who once saw animal sacrifice as the key, plugged Jesus right into that system. It just made sense to them, and so then they saw Jesus as the key to end all other keys, the ultimate key to the ultimate treasure in the ultimate treasure hunt adventure the world has ever partaken in. This is number four of five reasons that made Jesus so amazing to the author of this letter we now call Hebrews.

She—for those of you who weren’t here two weeks we talked about how this letter was likely written by a woman, namely Priscilla, if you missed it I refer you to that sermon—she saw Jesus as the answer that the world was looking for but just didn’t know they were. Because we thought the sacrificial system was just fine the way it was and then theologians like our author came along and said, “No, Jesus is the key. Period.” Nothing else, no one else.

And ever since, Jesus has been the key to unlocking God’s love and acceptance for people all over the world. And it gets even better than that! We, you and I, get to share that treasure with everyone, using that same key our author did, Jesus. How amazing is that! We get to be the clues that others find on their treasure map as they search for God’s love and acceptance. And keep in mind, some of them may not even know they are looking for that and that’s where we come in.

Now, for the past two thousand years, the church has done this with varying degrees of success, and that’s putting it lightly because sometimes it’s been with varying degrees of outright failure. There have been times when we have intentionally withheld clues from certain groups of people. There have been times when we have sent certain groups of people on wild goose chases, rather than leading them to the treasure that we have found.

And why have we done that? Oh, a little thing we like to call sin, in the form of our egos, our lust for power, for control, for wealth, for being number one, you know, all those human tendencies that we aren’t exactly proud of. We’ve gotten so good at it we don’t even realize when we are doing that anymore. And now churches all over the world are wondering, “Where did everybody go?” Well, thanks to the information age that we live in, much of the world wised up to that game the church has been playing and have walked away. Can’t say I blame them.

Which is why it is more important than ever, maybe since the early days of the church, to help people who are on the great treasure hunt, to point people in the right direction, towards Jesus who uncovers a loving and accepting God. Which is why I’m glad to be part of a church like Bethlehem and the ELCA, who loves to love people, with the same kind of love that comes from God, without condition, no strings attached. Granted, because of the past behaviors of the church over the last two thousand years, we’ve got a lot of work ahead of us convincing people of that. But I like to think of it as yet another adventure, another treasure hunt of its own, guiding people to the greatest treasure of all time, the amazing savior we’ve come to know in Jesus. Thanks be to God. Amen.