As most of you know, I don’t wear my clergy collar every day. I usually only wear it on a day when there is a worship service scheduled. So I don’t drive with it on very much. And that has me a little worried. I think I’m a pretty patient driver, at least compared to those I see on the road around me. I just think there are plenty of other things to get stressed over than driving. I do lose my temper every once in a while but I have never done that while wearing my clergy collar…yet. That’s what has me worried.

I drive in it so rarely, that I just know, one of these days, I’m going to lose my temper, and forget that I’m in my collar! I mean, it’s bound to happen! And why does that worry me so? Well, because my collar symbolizes something very special to me, it is an office that I am honored to hold, and I also want to represent the church, both Christianity as a whole, as well as Bethlehem, in the best way possible. So, flipping somebody off, or yelling some colorful language, might not be the best way to do that. Not that your pastor would ever do such a thing!

Symbols of all kinds, have been important for the world’s religions for ages. For that matter, symbols have been important to the world’s first civilizations since humans began using languages! From paintings in caves and hieroglyphics, to emojis and stop signs, symbols can communicate so much with so little. And they have so many uses! They can guide you, warn you, make you laugh, make you cry, keep you from danger, or point you to safety.

Here’s one example from our nation’s history. Due to the rapid population growth in the United States during the 19th century, in turn due to the Industrial Revolution, poverty soared to unprecedented levels. And with that, the number of migrant workers soared as well. By the time of the Great Depression, it is estimated that four million adults had to leave home to find food, shelter, and work. And while doing so, safety was of the utmost importance, especially for teens and women. 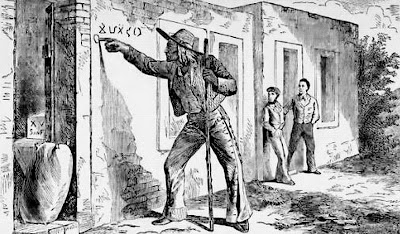 These migrant workers began to be called hobos around the turn of the last century, as seen here in this depiction of a California hobo by Albert S. Evans. I can’t even imagine the struggles they must have endured. And so they began to look out for each other, to keep each other safe, and to help each other out in finding food, shelter, work and other needs. One of the ways they did this was by using symbols. They would put symbols on houses and buildings to communicate with other hobos.

In our baptisms, we became symbols. And I don’t just mean the sign of the cross that was placed on our foreheads. I mean that we became, living, breathing symbols of Christ. And this season of Lent, looks us dead in the eye and asks, how are you doing with that? How are we doing as symbols of Christ? When people see us, what do they see? What do they experience? Like those hobo symbols, are we symbols of safety, nourishment, and shelter? What kinds of symbols are we to a world with so many needs? In our story that I read tonight, the disciples ask, “Who is the greatest in the reign of heaven?” And though Jesus’ answer is a bit long, and a bit morbid, he’s basically saying, that is the wrong question!

The real question is, how well are you symbolizing Christ and Christ’s teachings? Are you symbolizing things that make it easy for people to see Jesus? Or are you symbolizing things that make difficult or impossible to see Jesus? This Lent will be all about answering the question, “How are we doing as symbols of Christ?” Thankfully, no matter how bad we fail at that job, we’ll never get fired! Even though you will be able to wash off that ashen cross from your foreheads after you leave here, God’s symbol of unconditional love upon you cannot be. It is for you, and it is forever, to be shared with others by you, as the living, breathing, symbols of Christ that you are. Welcome to Lent. Amen.