Dying to Rise, Rising to Die

Today marks the end of the Epiphany season, which started as soon as the twelve days of Christmas were over on January 6th. On that day we celebrated the visit of the Magi to Jesus and his parents. That visit was significant for many reasons and one of those was the fact that these magi were Gentiles, and so the church has remembered that day as the revealing of Jesus to the whole world, not just for followers of Abraham, our Jewish siblings, but for everyone; which is why it’s called epiphany!

And since January 6th, we have read story after story of how that revealing unfolded, with Jesus teaching and preaching and healing and feeding. And today, it’s only fitting that we come to the climactic end of this revealing with the story of the Transfiguration, the reveal to end all reveals! Well, until we get to the cross anyway.

And speaking of the cross, it’s no accident that we celebrate the Transfiguration on the same Sunday every year, the Sunday before Ash Wednesday, when we begin our journey to the cross once again. Matthew points to this connection between the cross and the Transfiguration in our reading for today when he shares Jesus words just before they once again go up a mountain. This is the first of three times that Jesus predicts his own death in this Gospel.

Peter scolds Jesus for even saying such a thing and they have that now memorable exchange when Jesus tells Peter to get behind him and calls him Satan! Peter may have been wrong but it’s hard to blame him for reacting the way he did. For some time now he has been witness to all of Jesus’ amazing work so far. He has seen firsthand the change that Jesus has made in people’s lives. And now Jesus is willing to throw that all away and succumb to death, at the hands of some corrupt religious leaders no less?

It was unthinkable to Peter but that wasn’t the most surprising thing that came out of Jesus' mouth that day! He then goes on to say, that all who want to follow him, must say no to themselves and take up their own crosses! Come again Jesus? I’m sorry, I didn’t quite catch that. It sounded like you said that we have to die too! Ha! But that couldn’t have been what you said right? Jesus just stares back with his compassionate eyes that say it all—because that’s exactly what he said. Seems a bit counter-productive doesn’t it? Starting a movement only to ask your followers to die! What kind of love is that Jesus? Well, it’s a love for the world but more on that in a minute. Hold that thought.

Jesus then says something not so much surprising as it is weird, weird enough to get misinterpreted quite often. He says, some of you standing here won’t die before I come in my kingdom. Now, many people have interpreted that to mean when Jesus returns at the second coming. But he says some standing there will actually get to see it! So what gives? Well, like I said last week, these Biblical authors put these stories in a particular order for a reason. And what story comes immediately after Jesus says that? The Transfiguration! Jesus brings a few of his closest followers up a mountain, just Peter, James, and John again. They are like his inner circle, the core of his core followers. Jesus takes them up there and is transformed into almost pure light. Jesus is revealed to them in all his glory, and Moses and Elijah appear with him.

And what does Peter want to do? He wants to build shrines for them, one for each, Jesus, Moses, and Elijah. And I have a theory as to why he wants to do that. He’s trying to avoid death, and I don’t mean his own necessarily. Stay with me here. Remember, just before this, Jesus predicted his own death, and Peter wasn’t having it! Then Jesus told them that they’d have to die too. And I’m sure Peter was just as thrilled about that idea too! Then they find themselves at the top of a mountain with Jesus standing there with Moses and Elijah, shining like a star! And Peter, who wants to put all that death talk as far from him as possible, sees this opportunity and thinks, let’s just stay right here. Jesus has done a lot of great work already, surely that was enough. Let’s just stay right here and forget about all that death stuff.

And then, God interrupts him! Did you notice that? Just starts talking right over Peter! God says, this is my son! Whom I dearly love! Listen to him! In other words, you’re missing the whole point here Peter! Whoooosh! Went right over his head! Can you just put your religion away for a second Peter and listen for goodness sakes! But again, you can’t blame Peter! It’d gone right over our heads too. There’s no way we would have really understood everything that was going on, especially in the moment.

Thankfully, we have our Gospel writers who had some time to think about all of these things and kind of nudge us toward connecting those dots. So let’s do that now. Matthew was trying to get us to see this connection between death and the Transfiguration, and also to take that next step and apply it to our own spiritual journeys with Christ. So what might that look like? 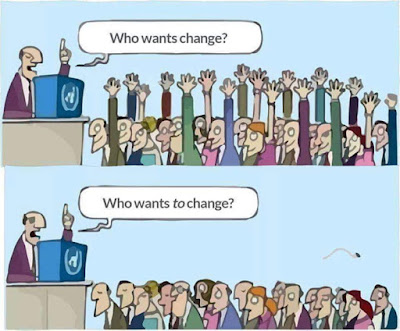 And what kind of death are we talking about here? Not physical. Every other kind of death but not physical. Let me give you a couple examples. In the past few years, you’ve had to make some difficult decisions here at Bethlehem. At one point, many years ago, you were worshipping over 300 each week. And like many churches across the nation, that number is considerably smaller. And because of that, we have had to realize that we just can’t do all the things that you used to be able to do. And so, we’ve had to allow ourselves to be transformed, transfigured, changed, and that means allowing death to have its way with us—taking the form of saying goodbye to worship services, staff positions, programs, etc. But let’s not confuse death with failure. What Jesus is talking about here is being open to death so that new life can come. That’s not failure my friends. That’s called faith.

Here’s another example, our new welcome statement. In order for that to happen, you have had to allow death to come to old ways of thinking, to old ways of interpreting scripture, to old ways of seeing human beings, etc. in order for something new to be born. And that has been in the works here at Bethlehem for many years, long before me, long before you hired your first gay staff person, long before 2009 when our denomination began allowing homosexuals to become clergy, who knows how long God has been working on Bethlehem towards our beautiful new welcome statement, point is, if you were able to chart that out it would look like a graveyard.

Because every time you got closer to becoming a bold welcoming community something had to die. And in each and every one of our deaths, we are changed, we are transformed, we are transfigured into something new, into something that shines like the sun for a hurting world that is seeking new life. Unfortunately, not everyone who endures those deaths gets to see the fruit of new life that comes from them. Think of all the people from your past who are no longer with us, some have died, some have moved, some have left. And so, for them, all they got to experience was the death part of this process. The moral of that story is, just hold tight. Death is only half the story.

Is it easy? Gosh no! Does it hurt sometimes! Nobody knows that better than a congregation that has gone through a church split like you have. Transfiguration can sting. Change can be painful. I like to call them growing pains. Even when we are having to be changed because of things like decreased attendance or a decreasing budget, I still call those growing pains because we don’t know what is on the other side of those deaths but our faith tells us, this story of the Transfiguration tells us, that death never, ever, gets the last word.

I think Jesus was transfigured before Peter, James, and John to give them comfort. Amid all that death talk at the bottom of the mountain, Jesus knew that they needed hope, that they needed to see a future that they couldn’t even imagine at the bottom of that mountain, that there was something at work here beyond their wildest imaginations. And so, Jesus is transfigured for us too, to give us hope as we are called to death, to transformation, to change, to new life. Thanks be to God. Amen.