Even though we haven’t skipped any of Matthew’s Gospel between last week’s reading and today’s, Matthew skips about 30 years of Jesus’ life. At the end of chapter two Jesus was a toddler and was being visited by the Magi, and then at the beginning of chapter three, he’s an adult and ready to start his ministry. Matthew doesn’t bother telling us that he’s skipping thirty years, we have to estimate that from events that Luke mentions in his Gospel. On top of that, unlike Luke, Matthew doesn’t even tell us anything about those thirty years. At least Luke gives us a story from when Jesus was 12 years old.

For Matthew, these years just don’t seem important enough to even reference. It was enough to tell us he was born, his lineage can be traced back to Abraham, he was visited by some magi, and then had to move twice to escape some psychotic kings that wanted him dead. That’s it. It’s more information that Mark gives us about these early years, as we will read next year; less information that Luke gives us, as we will read the year after that, but you still get the sense that Matthew wants to get to more important stuff than mangers and magi and family trees. 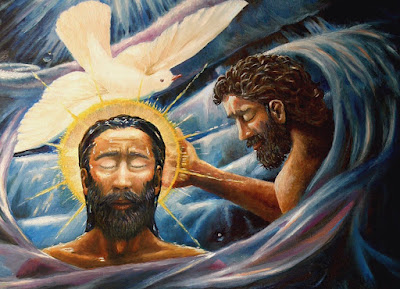 And so, we get today’s story about John the Baptizer and Jesus. And aren’t these two a pair! Talk about an odd couple! I mean, if you were writing a book about this new master of the universe, you would not start it with a pair like these two! Take John for instance. Here he is, living out in the boonies, wearing weird clothes, eating bugs and honey, and calling people names! Oh yeah, I want to go to his church!

And then there’s Jesus, who comes out of nowhere, no job, poor, a commoner, a resume that leaves a lot to be desired, and he just expects to take over John’s ministry that he’s worked hard to build up, and everyone’s just supposed to go along with that! I mean, if we didn’t know better, we’d think these two just traveled here from Mars and just don’t know how things work here on Earth! These guys seriously need a PR specialist right? But no, these two just keep forging ahead like all of this normal. But this is not how you start a ministry, or a movement, or a following, or heck, even a book club!

Let me give you an example of what I’m talking about from the story itself. John was out in the wilderness, offering baptism to people, allowing people to confess their sins to him, and what was he requiring of them? To change their hearts and lives, to produce good fruit. That’s not the way this works John! You’re supposed to ask them for money! You’re supposed to tell them to go to a priest! You’re supposed to direct them to the temple in Jerusalem to make an animal sacrifice! You’re doing it all wrong John!

And don’t get me started on this Jesus fella! He walks in doing everything backwards too! John sees him and expects to be baptized by Jesus but instead Jesus says, “Allow me to be baptized.” And I want you to note here that these are the first words from Jesus in the Gospel of Matthew. These are the first words from Jesus that Matthew chose to share with his readers. And since Jesus is kind of a big deal in this book, that’s got to be significant. As a writer, you just don’t give a throw away first line to your main character! But back to his backwards ways. You would think, that since Jesus is the new leader of this new minsitry, not to mention the savior of the world, that he’d be doing the baptizing here, not John! But no, Jesus asks to be baptized instead. And we’ll get to why in a second.

For one, religious laws that were more about keeping outsiders out and insiders in. Politics that allowed certain groups of people to be taken advantage of. Social constructs that had developed to treat women, the poor, people of other races unfairly. Yes, those will all be addressed in the Gospel of Matthew. These two cousins, John and Jesus, were making a new community that would be like nothing else the world had seen. And it was going to go against the grain of society, and make more than a few enemies along the way.

Of course not! God has loved you since the beginning of time and God could not love you more than God already does! So then why did Jesus want to get baptized by John? Well, people have written volumes on this subject but I only have time to point out my top two reasons. One, because Jesus wanted his followers to be baptized, and so he was baptized as a model for us to follow. But two, and the most important reason, is what he was baptized into…

We need a community when God asks us, like John does in today’s story, to change our hearts and lives, especially when we don’t think we need to change anything about ourselves and we like things just the way they are! Jesus knew he would need a community to see him through the days ahead. And Jesus knows that we do too. Thank God for this community, that we have been baptized into. Amen.