Home Is Where You're Blessed

Today is the Epiphany of Our Lord, that’s the fancy title that we give the day that we remember the visit of the magi to Jesus and his family. It also marks the end of the Christmas season, as the twelfth day was yesterday. Today is a wee bit more special though because it only falls on a Sunday every six to eleven years, so it is rare for us to gather on this date to celebrate it. Here’s some more churchy trivia for ya, today is also the first day of Mardi Gras, which culminates on Fat Tuesday, the day before Ash Wednesday.

It may sound strange to be talking about Ash Wednesday already. I mean, it is just around the corner, but we just celebrated Christmas! Well, if you think about it, it really isn’t that strange, because all these holidays and their associated stories, are all connected together. We can’t have Easter without Lent, and we can’t have Lent without Christmas. Something we should keep in mind as we read through the Gospel of Matthew between now and Easter.

But we’re not there yet, and today we have the crazy stories that surround the birth of Christ, complete with genocidal kings, astrologers from the east, angels, more dreams, a new star, and a lot of traveling for a new Middle-Eastern family of refugees. However, in spite of all the craziness that surrounded the birth of Christ, we have this very peaceful scene of the visit of the magi. Now, their visit is profound for a variety of reasons. For one, they’re the first gentiles, meaning non-Jews, who worshiped Jesus.

So, in a sense, they represent us Christians who don’t come from Jewish lineage. They were our forerunners so to speak. Secondly, these magi were probably astrologers, and more than that, scholars believe that they were probably Zoroastrian priests, a monotheistic religion that predates Islam, Christianity and even Judaism. You’re getting all kinds of trivia today. So, not only were they not Jewish, they were priests of another religion!

So, why am I sharing all this with you about the magi? Well, because I think we can learn a lot from them, two things in particular. Firstly, in spite of their differences, cultural differences, ethnic differences, religious differences, they were still able to honor Jesus, who was not royalty, was not of their religion, was not rich, was not even an adult for crying out loud! Yet, they went out of their way, traveled far, only to find a poor Jewish child of a carpenter and his young wife. 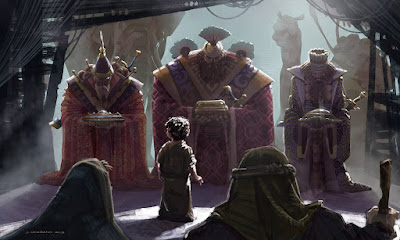 And upon arrival, they did not debate whether this trip was worth it or not, they did not express any surprise or disappointment, they didn’t even double-check their GPS! No, they bowed, and blessed this new family with gifts of gold, frankincense, and myrrh, very expensive gifts mind you. But I don’t think these expensive gifts are the real blessing here. For me, the real blessing in this story, is their ability to see the divine in this family, particularly in their child, Jesus.

What did they believe about him? I don’t know. What was their theology? I don’t know. What sort of doctrines did they have? I don’t know! You see, none of that mattered to them. Those were not questions that needed to be answered, in order for them to go to him, to acknowledge him, and to bless him. Now y’all are smart, I’m sure you’ve already guessed where I’m going with this part. I mean, imagine if we practiced this in our everyday lives.

So that’s the first thing we can learn from the magi, the other thing has to do with where this blessing took place. In Jesus’ first couple years of his life, the poor little guy was moved around a lot, from one temporary location after another, always fleeing from danger. I’m sure no place felt like home during those first few years. First they had to go to Bethlehem, then they had to flee to Egypt, then they were supposed to go back to Bethlehem but went to Nazareth instead.

And it wasn’t until then that little Jesus was able to plant some roots, and call a place home. Or was it? What do we consider home? There are lots of cute little catchphrases regarding this: Home is where you hang your hat. Home is where the heart is. Home is wherever I’m with you. There are probably dozens if not hundreds of ‘em. So, here’s one more! What if, home is where you’re blessed?

The magi come to this temporary residence of this new little king, they don’t wait for them to get settled in, they don’t wait for him to rise to power. Just the opposite in fact! Here are Joseph and Mary, starting their new family, with the life of their child at constant risk, there are powerful people who want him dead, they’re living their lives looking over their shoulder, sleeping with one eye open—this is not the new life that either of them had planned! And nothing about this situation probably felt like home! And then in walks in these Zoroastrian priests from some far off land and blesses them! And in so doing, they help put things in perspective for them, a gentle reality check so to speak. And maybe for the first time in a long time, even if for a fleeting moment, all was right in their little corner of the world, and it felt like home.

We have the opportunity, my friends, to not only see and acknowledge the divine in others, but to bless them because of it and make them feel at home, wherever we may encounter them, whatever they may be going through. And it doesn’t have to be done extravagantly like the magi’s gifts, although it could be, I mean, we will be passing the offering plates in a minute! I’m kidding! I’m kidding! Not really.

But if we could acknowledge the divine, dwelling in everyone we encounter, and then bless them in whatever way we may feel called, in big or little ways, we can bring home to wherever we are. And I bet we’ll feel at home as a result too. It could be as big as helping out a poor family out of a rough patch. Or as small as a compliment or smile to someone who is noticeably having a bad day. Or anything in between! Sky’s the limit! Be creative! Just remember, home is where you’re blessed. And that can be anywhere, with anyone, no matter how different from you. Home is where you’re blessed. Home is where we bless. Thanks be to God. Amen.