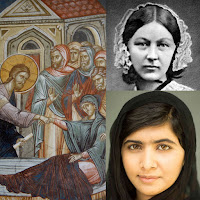 Today’s Gospel reading brought to mind many historical figures who, in spite of adversity, made positive contributions to society: Helen Keller, Maya Angelou, Anne Frank, Elizabeth Kubler-Ross, Oprah Winfrey, Mother Teresa, Harriet Tubman, just to name a few.  Two figures stood out among the crowd, Florence Nightingale and Malala Yousafzai. Florence Nightingale was born in 1820, raised in London, and may have been on my mind because she is a character in a video game I’m currently playing but that’s beside the point.

She is credited as the founder of modern nursing, ushering in many practices that we take for granted when we are in the hospital like: washing hands, laundering sheets regularly, good nutrition, well-circulated air, and using sterile bandages. Though she came from a well-to-do and quite progressive family, they did not want her to become a nurse, and urged her to marry and settle down. One thing that I didn’t know about her was what finally cemented her decision to become a nurse, it was visiting a Lutheran teaching hospital in Germany. She was so impressed with the pastor and nurses there, she enrolled immediately. 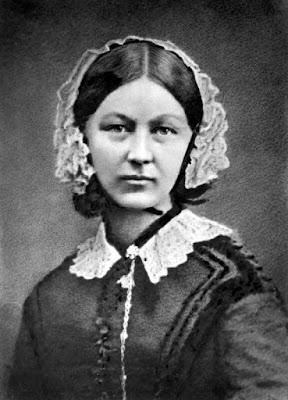 She was a hard worker, worked herself to death, almost literally. At one point she became so gravely ill they didn’t think she’d make it. But she did. And she had just barely recovered when the Crimean War broke out. Now, at this point in her life she had a choice. She had just recovered from a near death illness, and could have easily hung up her nursing hat, went home, got married, and settled down to a very comfortable life back in London.

However, she believed that her work as a nurse was a calling from God. She wrote to her sister, “God called me in the morning and asked me would I do good for him alone without reputation.” In other words, she saw her work as simply the right thing to do, not for money or fame, just the right thing to do, and her faith is what compelled her to continue. The British military then called on her to help wounded soldiers who were dying of infection and poor nutrition rather than their wounds. And she ended up saving countless lives throughout the rest of her life.

Fast forward about 150 years, and Malala Yousafzai is born in 1997 in Pakistan. At the ripe old age of 11, she began her activist work toward the education of young girls in her country. Something we take for granted here in the states but was not something that is valued in her homeland. She began writing a blog to raise awareness for this effort but had to do so under a pseudonym for safety reasons. However, it was not enough to keep her safe. 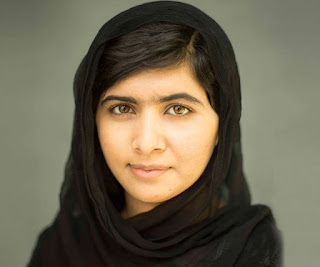 At the age of 15, the Taliban found her, on her school bus, and shot her in the head. Against the odds, she recovered, and found herself with a choice. She was already recognized as a leader for girl’s rights to an education, had done great work and raised a ton of awareness for the cause. No one would have blamed her for hanging up her activist hat after being shot in the head for it. But as she puts it, the Taliban failed, because it only “made my voice louder.”

In her book, I Am Malala: The Story of the Girl Who Stood Up for Education and Was Shot by the Taliban, she writes “I told myself, Malala, you have already faced death. This is your second life. Don't be afraid — if you are afraid, you can't move forward.” And she believes that her second life, comes from God. And therefore, her work as an activist is a calling from God, and ceasing that work just doesn’t seem like an option for her. Since her recovery she has traveled with world, speaking, teaching, writing books, and oh yeah, became the youngest recipient of the Nobel Peace Prize.

Today’s Gospel reading always catches me off guard whenever I read it. Jesus heals Simon’s mother in law who was on the brink of death. Mark may say that she only had a fever but keep two things in mind: one, your body gets a fever because of an infection, bacterial or viral; and two, this was two thousand years ago, if your body couldn’t fight the infection on its own, you died. So Jesus heals her, in probably one of the most tenderest healings in all of scripture. 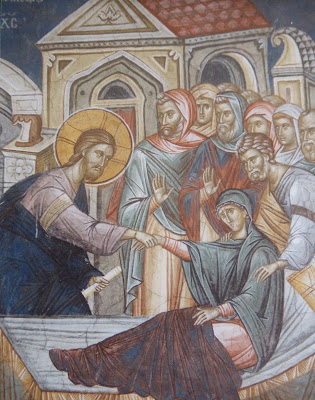 Jesus comes to her bedside, takes her by the hand, and raises her up. It has been called the first resurrection story in the Gospels. In fact, Mark uses this same verb to describe Jesus’ resurrection at the end of this Gospel. And then Simon’s mother in law has a choice. What to do with this new life she has been given. After being on the brink of death and raised by Jesus himself, how would she spend the rest of her life?

Mark reports that as soon as the fever left her, she began her new life in service to others. Now at first glance many have dismissed her service as being the place of a woman in the first century; that she was just returning to her previous role in the male dominated society that she found herself in. But upon closer inspection we find that’s not the case at all. This was not yet another example of sexism in the Bible. This was her call story. The fact that we don’t know her name is an example of sexism but not her service. And here’s how we know that. The verb used here that we translate as serve, is the same verb that Mark uses to describe Jesus ministry throughout his Gospel, and on top of that, the same verb that he just used, in this same chapter, describing the angels serving Jesus in the desert after his forty day temptation.

Now the problem with taking a look at these bigger than life historical figures like Simon’s mother in law, Florence Nightingale, and Malala Yousafzai, is that it can make our work look very small. Many of us don’t have a dramatic story like these people did. Many of us haven’t had adversity to the degree of these courageous people. But do we have to? Do we need a dramatic story? No. Because the truth is, we all have a story. And not just any story, we all have a resurrection story. We all have a call story. We all have been given a new life in Christ, a second life, represented by those baptismal waters that we pass to and from this holy place each week.

This week, I invite you to ponder, on your story of resurrection, on your call story. Who did God use to raise you up? Did it happen all at once or was it a slow process over a lifetime? How have you changed? What have you done with the second life that God has given you? Has God placed you in someone else’s resurrection and call story? How has God called you out of your baptismal waters and into this new life? Big questions, I know. But they are questions that need answered, because it is through those stories that we witness to the power of God in this church. It is those stories that will catch the eyes and ears of others. Practice sharing them with each other—so that we can share them with the world. Thanks be to God. Amen.
Email ThisBlogThis!Share to TwitterShare to FacebookShare to Pinterest
Labels: call, choice, florence, healing, in, jesus, law, malala, mother, nightingale, peter, raised, resurrection, sermon, sharing, simon, story, world, yousafzai