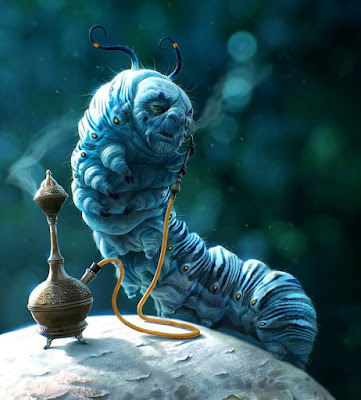 “The Caterpillar and Alice looked at each other for some time in silence: at last the Caterpillar took the hookah out of its mouth, and addressed her in a languid, sleepy voice. “Who are you?” said the Caterpillar. This was not an encouraging opening for a conversation. Alice replied, rather shyly, “ I—I hardly know, sir, just at present—at least I know who I was when I got up this morning, but I think I must have been changed several times since then.” “What do you mean by that?” said the Caterpillar sternly. “Explain yourself!” “I can’t explain myself, I’m afraid, sir,” said Alice, “because I’m not myself, you see.” “I don’t see,” said the Caterpillar.


“I’m afraid I can’t put it more clearly,” Alice replied very politely, “for I can’t understand it myself to begin with; and being so many different sizes in a day is very confusing.” “It isn’t,” said the Caterpillar. “Well, perhaps you haven’t found it so yet,” said Alice; “but when you have to turn into a chrysalis—you will some day, you know—and then after that into a butterfly, I should think you’ll feel it a little queer, won’t you ?” “Not a bit,” said the Caterpillar. “Well, perhaps your feelings may be different,” said Alice; “all I know is, it would feel very queer to me.” “You!” said the Caterpillar contemptuously. “Who are you?” Which brought them back again to the beginning of the conversation.


That of course was a passage from Lewis Carroll’s book Alice’s Adventures in Wonderland, published in 1865. I figured, with the recent Game of Thrones and Star Trek references, I’d choose a really old pop culture reference to make sure we were all familiar. Seriously though, as soon as I read the priests repeatedly asking John the Baptist, “Who are you?” I thought of the caterpillar from this book. The story of course is about Alice who falls through a rabbit hole and has many adventures in Wonderland, meeting many fantastical creatures and characters, not the least of whom is a caterpillar, repeatedly asking Alice, “Who are you?”


And oddly enough, even in her young age, she immediately recognizes that he is not simply asking for her name, but is asking on a deeper, existential level, “Who are you?” And she doesn’t know anymore. By this time in the book Alice has already been through so much. She has gone through changes, seen so much, that she is questioning everything she ever thought was true. Her whole world has been turned upside down, to the point that she is now questioning her entire existence. So to answer the question, “Who are you?” is no easy task.


Director Tim Burton, in his 2010 film version of this old story, explores this identity crisis even further. In that movie, a prophecy states that someone by the name of Alice will slay a dragon that has been terrorizing the land. And when she meets the caterpillar for the first time, the white rabbit asks him, if this is that Alice, and his answer is, “hardly.” Alice assumes “hardly” means no, because slaying dragons isn’t the business of a young woman, right?


In our story today from the Gospel of John, the priests repeatedly ask John the Baptist, “Who are you?” And, in an ever so Lutheran way, he responds by telling them instead who he is not. “I’m not the Christ.” I’m not Elijah. I’m not the prophet. We’re pretty good at that aren’t we? Telling people who we are by telling people who we are not. Partly out of necessity. In the ever increasing polarization of our nation, we often find ourselves having to differentiate from other Lutherans, or other Christians. At one of our recent funerals, I was talking to a distant family member of one of the deceased, and she asked me point blank, “What kind of Lutheran are you?”


I appreciated the directness of the question and I went into my usual spiel about the differences between the Lutheran denominations but it turns out she already knew enough of all that because when she learned that we were an ELCA congregation, she let out a sigh of relief and said, “Oh good. I’ve been to the others, and didn’t feel welcome there.” I could tell there was a story or two behind that statement but it was not the time or the place to get into all that. And though it was nice to hear that we are becoming known for being a welcoming denomination, it did make me wonder if we are saying that loud enough. How often are we even saying it out loud?


Though John the Baptist begins to answer the question, “Who are you?” with all who he is not, he doesn’t end there. There’s nothing wrong with us differentiating ourselves from others, as long as at the end of all that, we can confidently say who we are, out loud, for all to hear! John the Baptist, after sharing who he was not, confidently proclaimed who he was by saying, “I am a voice.”


And in this state of polarization that we find ourselves in, there are so many voices. Loud voices! Competing voices! Some are loving voices but there are so many hateful voices out there too. And some of them are coming from Christians. But our calling is not to change their minds. Good luck with that anyway! Our calling, our job, is to be a voice—a voice of equal volume, of equal confidence, of equal passion. But before we are a voice we have to know who we are. The world is asking, “Who are you?” What is our answer? Like, John, our answer is based on what we do. Do we love people of all colors? Then say it! Out loud!


I’ve been your pastor for long enough to see that you have a pretty good grasp of who you are. It’s been a long road, with twists and turns, and your share of bumps and bruises, but because of that, it has helped you to find yourselves, to discover who you are, who you have become, in order fulfill your calling here in this place. And like John the Baptist and Alice in Wonderland, once you know who you are, it’s time to proclaim it, out loud, for all to hear—to be a voice, in a wilderness of voices. Thanks be to God. Amen.
Email ThisBlogThis!Share to TwitterShare to FacebookShare to Pinterest
Labels: alice, baptist, becoming, caterpillar, changing, differentiation, identity, jesus, john, loud, lutheran, out, polarization, priests, sermon, voice, wilderness, wonderland