No Lullaby Here - or - Mary the Badass

Today’s Gospel reading assigned for today is the Annunciation, where Luke shares with us the story of the angel announcing to Mary that she was going to have a baby, even though she’d never had sex, details, oh and that this baby was just going to be the chosen one of God,  more details. And let me pause here and say thank you to Debbie and Roberta for singing this for us today. It has been a joy singing Holden Evening Prayer again with them this Advent.

So, the angel drops this explosive news on Mary and though confused and surprised, she agrees to what the angel said—and then poof, the angel is gone—leaving Mary to process what just happened. How would you react? How would you even begin to process this? Aside from the fact that it would be a medical miracle for me to get this news, I have no idea how I would respond.

But after a little time, and a visit to her cousin Elizabeth, Mary responds, in a big way, in a surprising way. And she responds in song, which in and of itself is a bit odd to us. But that’s only the beginning of the surprise! It’s what she actually sings about, that makes this song so astonishing. Because, if a woman is going to break into song, shortly after getting the news that she’s pregnant, you’d expect her to sing a lullaby maybe. But no, not Mary. That would be too ordinary.

After all, she is not carrying just any baby, but the chosen one of God most high! So instead, she sings this earth shattering song of protest—she doesn’t sing of babies and cradles, instead she sings of justice, of the mighty being cast down from their thrones, of the wealthy having no part in any of this, she sings of world that is about to be turned upside down, by God, through this little one that she now carries within her. 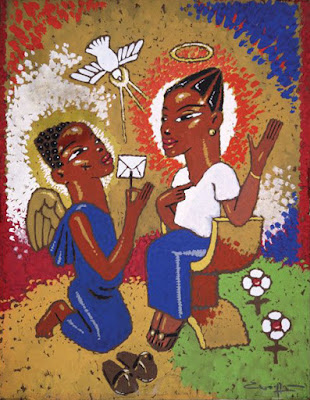 This is not a song of some meek, timid, woman who was just expected to do what she was told. This was the song of a badass. Am I aloud to say that in a sermon? Oh well, too late! I can see the headlines now, pastor of Bethlehem curses in church, youth group caught doing drugs in parking lot shortly after! I think we’ll all be ok. You have to understand, we all have different ways of communicating.

And for people like me, whatever that means, calling someone a badass is a term of endearment, is a way to show the ultimate respect for someone. It describes someone who doesn’t take no for an answer, someone who laughs in the face of life’s toughest obstacles, who doesn’t care what the world thinks of her, someone who keeps forging ahead, no matter what. In short, Mary.

It’s no wonder her son turned out the way he did. He followed in his mother’s footsteps. But now we are getting ahead of ourselves. I want to share with you why it’s so important to remember Mary this way, and specifically this song of hers. She had the foresight to recognize, that this baby she was now carrying, was on a path that would not be easy, to say the least.

And so she sung of this mighty savior, who had a lot of work to do, and who was about to make a lot of enemies. And why is this so important for us to remember today? Because the work is still ongoing. Two thousand years later and the body of Christ, you and I, is still living out this song, filling the hungry with wondrous things, casting the mighty down from their thrones, lifting the humble, humbling the proud, working for justice, love, and kindness forevermore.

But unlike Mary, we do not wait for a savior to come and show us a better way. Because lo and behold, Christ has come, and gone, and come again. And now we get to live this song of justice that is needed now as much as it was needed then. I was listening to NPR with Jesha the other morning on our way to school and we heard a story that really moved me. They shared a statistic I had not heard before. In the US, black babies die at a rate that is double than that of white babies, in their first year of life. Double! Doctors and researchers have been trying to figure this out for a long time, and the two main culprits have been thought to have been poverty and lack of education. But new studies are now saying that racism is to blame.

NPR reports that, “When we are stressed, our bodies produce stress hormones. When the source of stress goes away, so do the stress hormones. It's a normal, healthy process. But when someone is stressed out all the time, their bodies have perpetually high levels of stress hormones.” And stress of course, can bring on early labor and other complications.

And for black women, that stress level is higher due to the racial discrimination that they have to endure: whether it’s purchasing a new car, finding housing, applying for a job, getting an education, it’s difficult to find any aspect of a black woman’s life that is not impacted by racial discrimination. And I didn’t even mention the fact that black women are often the primary breadwinner and caregiver due to the higher incarceration and unemployment rate of black men, yet another result of racial discrimination, causing this horrifying cycle that isn’t slowing down fast enough. I share this with you as an example of how timely this ancient song of Mary’s still is.

Now, I know that tonight is Christmas Eve. And maybe you thought that it’d be all joy and carols this morning. But it’s not Christmas yet. And for some, it never is. If we lose sight of the real reason that Christ came in the first place, if we forget why the mother of God chose to sing this song, then what are we even doing here? Our next hymn, Canticle of the Turning, is not very Adventy, which Jeff was not shy to point out. But it is based on this same song of Mary, which is also not very Adventy, at least not in the way we would traditionally think of Advent. But maybe it should be.

Verse two begins, “Though I am small, my God, my all, you work great things in me,” which speaks to this call we have to continue to work for justice and peace in the world. But verse four gives us some comfort in that difficult and overwhelming work, “Though the nations rage from age to age, we remember who holds us fast.” Ultimately it is God, through Christ, that comes to turn the world upside down, or right side up, depending on your perspective. And it is in that promise, that we can live this song that Mary has left us, this calling that Mary has left us. Thanks be to God, to Jesus, and his mother Mary. Amen.