The Three Days - Making a Case for Love 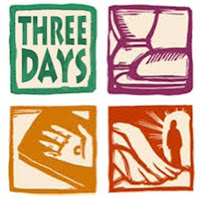 One of my favorite songwriters, Martin Gore, wrote a song called Light that really sets the tone for these Three Days. Here are some of the lyrics:

Take my hand
And walk in the light
Understand, there's a fire to ignite
You know we have a responsibility
It's true we've been chosen
And now we have the possibility
Of melting what's frozen

Surprisingly, the author is not a religious person, and this is not a religious song. But from the images of light, fire, being chosen, and our mission, I couldn’t help but think of these Three Days when I first heard this song a few weeks ago. But the line that first caught my ear was this, “we have to make a case for love.” On this night of the Three Days, we celebrate Maundy Thursday with footwashing and communion but at the heart of it all, the sole reason we do these beloved rituals, in fact, the only reason we do any of the things we do in church, is love. On this night two thousand years ago, Jesus gave his friends a new commandment, “Love each other. Just as I have loved you.”

And of course, as is always the way with Jesus, there is this outward focus to this love. Jesus says, “This is how everyone will know that you are my disciples, when you love each other.” We are not called by God to love each other just for the sake of love, because it feels good, but so that it will be noticed by the world. And though neither John nor Jesus say this explicitly, I believe it’s so that it will catch on, so that it will become infectious, because God knows how contagious love can be. And maybe, if the world sees love within the church, people will not only take notice but they may even inquire about it, be curious about it, and maybe even, want in on it.

However, that may be too simplistic a view of this love culture that Jesus calls us to. And maybe even too passive of a perspective. I’m wondering if Jesus had more in mind than just us loving each other so that the world will see it. I’m wondering if Jesus is somehow calling us to make a case, to make a case for love in this world. That might sound strange at first but take a look at the world that we live in. Take a look at the headlines, take a look at what is going viral on social media.

From the person who took a video of a maid who was dangling out her window 8 stories up and instead of putting down her camera and helping her she took a video of her falling. To James Dobson, founder of Focus on the Family, writing about transgendered women using men’s restrooms, he writes, “If you are a married man with any gumption, surely you will defend your wife’s privacy and security in restroom facilities…If this had happened 100 years ago, someone might have been shot…Where is today’s manhood? God help us!” End quote.

I think a better question Mr. Dobson is, “Where is today’s love?” He goes on to compare their use of the restroom to inappropriate acts that I cannot repeat in a sermon. And I won’t even go into the details of the recent bombings in Syria, or the church bombings in Egypt. It is clear to me that we live in a world where a case needs to be made for love. That is going to be our theme over these Three Days, especially in this one sermon over the course of Three Days. And the question we have before us tonight is, “Whose responsibility is it to make this case for love?” Who will stand up in this world and say no to the kind of behavior and thinking that I just shared with you?

Who will tell the world that’s it’s not ok to stigmatize certain groups of people because they are different than us? Who will show the world that there is an alternative way, a better way, than hate and prejudice? I think Jesus says pretty clearly in today’s gospel reading, that it is our responsibility to make a case for love, at least now, on this side of the cross. In the washing of his disciples feet Jesus shows us what love looks like—made all the more poignant when these same disciples abandon and betray him. In the Last Supper, their most holiest of meals that he feeds them with, Jesus shows them what love looks like. But he was just getting started. He was on his way to showing them, showing us, showing the world, what love looks like…

On Good Friday Jesus makes a case for love like the world had never seen. For three years Jesus had been talking about love, preaching about it, teaching about it, but as we all know, actions speak louder than words. And for three years there certainly had been a lot of actions on Jesus part, showing just what love, the kind of love that he was bringing, looked like.

He was healing the blind, the lame, the sick, he was restoring people back into community who had been abandoned, he was visiting those in mourning, he was raising the dead, casting out demons, protecting those whose lives were at stake from unjust laws, even biblical ones. To tell you the truth, all of that should have been enough! Uh uh, says Jesus. We’re going to take this even further. We’re not going to leave anything to chance. The world will know, how much God loves them, even if I have to die to prove it.

And so he did just that. The cross means many things to many people. Only you can determine what it means for you. And it doesn’t have to mean only one thing. I believe God is big enough and flexible enough to allow for it to mean whatever it needs to mean to you right now. For me, I look at the cross differently depending on my emotional state, my mental state, even my physical state. God is big enough to handle that, to handle me.

But no matter my state of being, I always seem to come back to the cross, and Jesus actions on the cross, as being something that I should honor, remember, process, and reverence. And also that it is bigger than any theology we may attach to it, any doctrine or dogma that we may attach to it, the cross is bigger and farther-reaching than any words we use to describe it. So much about it is mystery. How much can we really fathom about what Jesus did on the cross and why?

However, I feel confident enough to say this about it. It is the clearest demonstration of God’s love that the world has ever seen. And that’s saying something! At the Vigil of Easter, we will hear some of the most amazing stories the Bible has to offer concerning God’s love: the crossing of the Red Sea, the valley of dry bones, Jonah and the great fish, to name a few. And again, after all the great stories of God’s love throughout the Bible, they should have been enough! I mean, how big of a case for love does God have to make?

Depending on the Gospel that you are reading, Good Friday may not be the greatest case for love the world has ever seen. For Mark, the first Gospel writer, it was. The resurrection only gets a few verses at the end of his gospel as the disciples flee in fear, telling nobody of what just occurred. It’s almost an appendix for Mark. It ends on a bit of a downer really. But for Mark Jesus death was the climax of the story, not the resurrection. In his death was where Mark saw Jesus making the strongest case for love. This was not good enough for Matthew and Luke who wrote their Gospels after Mark. Rather than just presenting the facts the way Mark did, Matthew and Luke do more of the interpreting work for you. They have a much clearer path and goal in mind of where they want to take you with their book.

And in their Gospels there begins to be this shift from Jesus death, to his resurrection as being the highpoint. One of the ways you can tell this is by how much they write about it as well as their inclusion of some post-resurrection stories. And then we get to John, written much later, and though wordy and very deep, John is bold with his proclamation of who and what Jesus is. If you don’t believe Martha by the end of his Gospel, that Jesus is the Christ, God’s Son, the one coming into the world, then John would probably say he failed. And for John, it was the resurrection, where Jesus is making the strongest case for love the world has ever seen.

And this is how we got there. On Maundy Thursday Jesus commanded us, and let me be clear here, this is not a request, not a suggestion, not a helpful hint or life hack, this is a command, to love one another as Jesus has loved us. With this command Jesus sends us out into the world to love, knowing that we will have to not just love but make a case for it, defend it, debate it, make an argument to the world that this is a better way—in the face of so much hate, evil, indifference, and apathy in the world.

And then after giving this command, on Good Friday Jesus says, I’ll go first. I’ll go first. In the way that a parent steps in harm’s way so their child can live another day and carry on the legacy.  That, in and of itself, is powerful! But God says I’m not done! Stop the presses! Hold the phone. This is not the end of the story!

And as the lyrics that I began this three part sermon with reminded us on Maundy Thursday, that is our responsibility that we have been chosen for, that is our mission from above, that is our only destiny to fulfill, to make a case for love in this world, a world that so desperately needs to be reminded, so desperately needs to be convinced, that there is a better way—love. It’s not easy work, just ask Jesus. It’s challenging, frustrating work, even dangerous sometimes. But we don’t do it alone. Never alone. For Christ is risen. Christ is risen indeed! Alleluia!

Here is the song that this three-part sermon was based on: