One of my favorite theologians, Dr. Karoline Lewis, who is a professor at Luther Seminary, had some profound thoughts on today’s Gospel lesson, which I would like to share with you today. Not only were they profound but they synced very nicely with my sermon from last Sunday. She wrote an article called Holy Conversations, which I thought was about last week’s story of Nicodemus. Nicodemus’s conversation with Jesus in the dark of night was indeed a holy conversation, as he courageously asked Jesus some questions and then remained open to the answers as he listened to Jesus. And today we have yet another, holy conversation—this time between Jesus and a Samaritan woman at a well.

But first, I want to correct a long-held interpretation of this story that quite frankly comes from the long-held misogynistic perspectives from within the church for 2000 years. This woman was not a loose woman, was not easy, was not an adulterer, was not sexually immoral, or any of the others words or phrases that have been assigned to her. And you know what, why beat around the bush? She was not a slut. Oh, pastor, why such language? And in church! Well, I’ll tell you why, because this poor woman has been abused by the church for 2000 years, and by extension all women, and the only way to make that stop is to call it what it is. 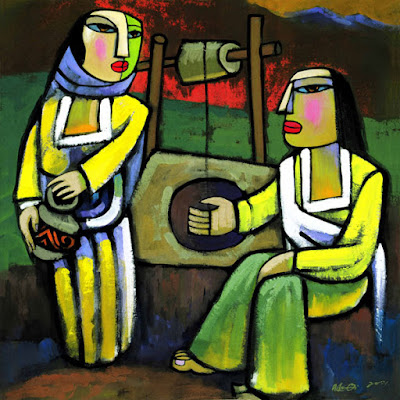 So here’s the truth about the Samaritan woman at the well. Odds are, she was medically unable to have children. Barren, is what biblical writers would have called it, all males by the way, but even that term, barren, has sexist undertones. As if a woman loses some of her worth if she cannot have children. We also use that word barren to describe the wilderness and the desert.

This is the state in which we find the woman at the well—in a state of community-imposed shame, disconnectedness, and low self-worth. And then Jesus comes along and has this private, personal, quite intimate conversation with her, someone she has never met before! Intimate because of the nature and content of the conversation but also because of the location—Jacob’s Well. So let me tell you how wells work in biblical stories, that’s where love connections happened. Think of it this way, in movies, when two characters accidently walk into each other and drop whatever they were carrying and scramble to pick it all up and then their eyes meet on the way back up, without any dialogue you know, this is headed in a romantic direction right? We’ve seen this a hundred times.

That was how the well was used in the Bible. That’s how Zipporah met her future husband Moses. That’s how Rachel met her future husband Jacob. One theologian called the well the Tinder of the Bible, the dating-website of biblical times! Now, I’m not suggesting that Jesus and this woman were romantic but let’s also remember that our author John was no fool, every detail of his Gospel is there for a reason.

So this location is certainly meant to conjure up all these stories of intimacy that began at a well. And I think one of the things that John was trying to get at here with this imagery is the close relationship that Jesus yearns for. And as I’ve mentioned in the past, the Bible is chock full of comparisons between our relationship with God and the love between couples. Take a look at Song of Songs and tell me I’m wrong. Talk about intimate!

The first is that the conversation begins with “mutual vulnerability.” Christ comes to her thirsty. And do you notice the irony there? The giver of living water is thirsty. Jesus, the Christ, the messiah, the savior of the world, God incarnate, is thirsty. A whole sermon could be written on that alone! And she comes to him in need of the living water that only he can provide, and is not ashamed to say so. Their mutual vulnerability sparks a life-changing conversation. Have you ever noticed in a conversation with a group of people, whether it’s at work or in a bible study or devotion, that as soon as one person opens up and allows themselves to be vulnerable, that vulnerability becomes a domino effect, and then one by one others become vulnerable! Funny how that works isn’t it?

The second characteristic is the questioning nature of the woman. Much like Nicodemus, it is her questions that keep the conversation moving and flowing and allow for something amazing to be revealed. It is in the questioning that the relationship forms and becomes closer still. And notice that Jesus accepts all her questions, even when she pushes back on him. They don’t faze him. He invites those questions, of her and of us.

The third characteristic of this conversation is time. Conversations like this, the kind that foster understanding and deep relationship, take time. You may have noticed that this was quite a long Gospel reading, and we didn’t even read it all believe it or not! They take time and they also take intentionality, and more often than not, they take multiple conversations. But if we’re serious about fostering the relationship, whether it’s between us and God or us and other people, we will take the time, and it will be worth the time.

The fourth characteristic of this conversation is the element of surprise. When you begin to ask questions, especially the kind with the intentional purpose of building and deepening a relationship, you have no idea what you’re gonna get! And if you think you do, expect to be surprised. This woman was the first person that Jesus revealed his true identity to, when he said, “I AM— the one who speaks with you.” “I AM” being the name of God from the Hebrew scriptures as revealed to Moses at the burning bush. Talk about a surprise! And not just to her, but to every male reader of this book over the centuries.

And the fifth and final characteristic of this conversation is, like last week, the openness to being changed by the conversation and its ensuing relationship. Dr. Lewis writes, “The woman at the well goes from shamed to witness. From dismissed to disciple. From alone to being a sheep of Jesus’ own fold.” When we take the time to ask vulnerable questions, and are not afraid of surprising answers, to build and foster relationships through holy conversations, we will be changed, we will not walk way the same people. And thanks be to God for that. Amen.