Courage, Questions, and Change, Oh My!

Today we begin four Sunday’s in a row in the Gospel of John. Now, you may remember that John is not my favorite Gospel, but these four stories that we are going to hear this Lent from John’s Gospel are some of the greatest in all of scripture. These are just the best of the best from John’s Gospel. If he released a greatest hits album these would be it! So much so, in fact, that these four stories were central in the early church for those who were being newly welcomed into the church.

So, it is fitting that Bethlehem has reignited the Journey of Faith this year. These are the stories that the early church wanted those new to a congregation to really sink their teeth into and take their time chewing and digesting them. These are the stories that held fundamental truths to our faith for them, and so it also very fitting to hear them during Lent, when we all take a step back and contemplate our own journeys of faith.

If I had been there, I think I would have gone up to Jesus and said, “Hey, I know you and I will have plenty of time to talk, so can I steal Nicodemus from you for a bit, I really want to talk to him.” That’s how much I’m enamored by this character Nicodemus! And, of course, Jesus would forgive me, because…Jesus. But I have so many questions to ask Nicodemus, because there is so much about him that I admire.

And, more importantly, there is so much about him that is helpful to our faith. There are attributes of Nicodemus that are essential to our faith. And I think that’s one of the reasons why this story was so important to this little Jewish sect 2000 years ago that sparked a new religion. So, I want to share three of those attributes today. 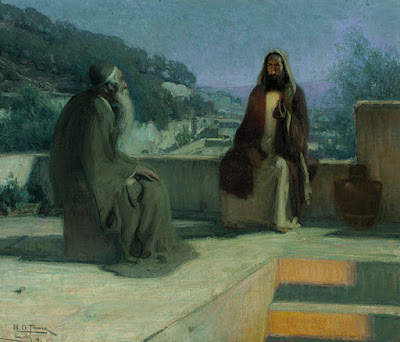 The courage of Nicodemus. Now, I think Nicodemus gets a bad rap because John pointed out that he came to Jesus at night, meaning in the dark, meaning when no one could see him, specifically his fellow Pharisees. And the assumption there is that this was an act of cowardice. I disagree. Especially because I don’t hear of any other Pharisees coming to Jesus to have a deep conversation, whether in the night or daylight. There are stories of Pharisees coming to Jesus to trap him, to get him to answer a question the wrong way so that he can be arrested. There were Pharisees that came to Jesus to insult him, or mock him. But there are no stories that have a character like Nicodemus, who comes to Jesus to have an honest conversation.

And seriously, how secret could this meeting have really been, even in the dark of night? We also know that there were many spies sent to constantly keep an eye on Jesus, waiting for him to make a mistake. Nicodemus knew, that at some point, this would get back to his colleagues. But there times in all our lives when you realize there are more important things than our own reputation. And I think that’s where we find Nicodemus at this point in his journey of faith. This conversation with Jesus was just too important to be worrying about what his fellow Pharisees might think. This was about life and death—more than Nicodemus could have ever realized. Which brings me to the second attribute that I’d like to share.

The questioning Nicodemus. Let’s be honest, Nicodemus is really struggling here. Now we are only in the third chapter of John, and we don’t know how much time that represents but you can tell that Nicodemus has been listening to Jesus. He has had time to think about Jesus words, his theology, and though there’s a lot that Nicodemus likes, there’s also a lot that Nicodemus his having a hard time swallowing. There are teachings from this new Jewish rabbi that, at least on the surface, are not in line with his own beliefs. And I think deep down he wants to understand, he wants to get fully behind this Jesus, but he has some serious hurdles to overcome before he can do that.

So, what does he do? He goes directly to Jesus with his questions. He doesn’t talk about Jesus behind his back. He doesn’t go to Jesus followers and tell them all the things he doesn’t like about what Jesus said or did. He doesn’t go to his fellow Pharisees and ask about these “new” teachings of this “new” Jewish rabbi. He goes directly to Jesus. If that turned out to be the only think we took away from this story I think that would be a huge step in the right direction!

On top of that, he doesn’t go to Jesus to complain and gripe, he goes to Jesus with questions, questions that come from the darkness of his struggles. Another great lesson for our faith from Nicodemus. We are so quick to dismiss or judge those we disagree with. Imagine how much further we could get, how much we could grow, if instead of dismissing and judging, we asked questions, directly with the one we are struggling with, whether that be God, or a fellow human being.

And the last attribute of Nicodemus that I’d like us to ponder is the openness of Nicodemus. And how do we know that Nicodemus was open to what Jesus was laying down? He listened. He asked a question, and then he closed his mouth, and listened to what Jesus had to say. An open heart requires a closed mouth. There’s just no way around that. I don’t have to tell you how much our society as a whole struggles with this. We all have ideas that have to get out! Opinions to share! Uncomfortable silences to break, with something, anything! However, I really do believe that faith grows best in our silence—because it is only when we are silent that we can listen. But it is only an open heart that is willing to be changed by that listening.

So those are three attributes of Nicodemus that we would do well to emulate on our own journeys of faith—his courage, his questioning mind, and his openness to be changed by the journey. What role does courage take in your journey of faith? It should have a role. What do you do with your questions and struggles? Do you go directly to the source? How open are you to being changed by the journey? Or are you fine just the way you are and Jesus will just have to accept that?

Tough questions, I know. But now is the time, and this is the place, with each other by our side, to ask the tough questions that Lent calls us to. Our dear friend Nicodemus appears two more times in John’s Gospel. On Good Friday, we will get to hear where his journey of faith led him—when he realizes that his courage, questions, and openness were indeed matters of life and death, more than he could have ever imagined. Thanks be to God. Amen.