This story from Luke, known as the Good Samaritan, is one of the better known stories from the Bible. Even those outside the church have heard of the phrase “being a good Samaritan”, even if they don’t know where that comes from. We even have laws on the books named after the good Samaritan. I can’t say it’s one of my favorite stories though. It certainly doesn’t leave you with warm fuzzies but that’s not why it’s not my favorite. I think it just makes me uncomfortable. It’s violent. It’s awkward. It angers me. And maybe most of all, it’s relatable—and not in a good way.

I wasn’t sure quite where to take you with this story, and I think it’s because the story seems so extreme. I mean, would we actually be the first two people who passed the dying man up on the road? How realistic is this story? Would we just walk on by, a person in need, just because of where they are from, or what they look like, or how they act, or behave, etc.? But the more I thought about it, and talked with my staff about this at our staff meeting, the more I realized that we do this, and we do it often, just in different forms. I’d like to share a video with you now, that has been circulating on social media recently.


That was a difficult video for me to watch the first time. It was difficult because my heart went out to that little child actor who, even though she knew she was just playing a part, still had her little heart broken. But it was mostly difficult because I could relate, not to the little girl but to those who chose to turn a blind eye, when she was made to look homeless and dirty. I moved here from Fresno, and the homeless population there is outrageous. At almost every street corner you can meet a homeless person. On garbage pick-up day you can bet that they will be rummaging through your bins. Some people complain, but for most, it’s just part of living in the south central valley.

The sheer numbers of homeless there cause many of the rest of us to become numb to their presence—except for people like my wife and daughters who try and help all of them. My point is, isn’t this one way that we become like the first two people in our Gospel story, the priest and the Levite, who pass the dying man by on the side of the road? And I don’t just mean on an individual level, but also as a society, as a government both local and national and international.

How do we, systemically, pass people in need by, on the side of the road? And because of reasons like where they are from, what they look like, how they act or behave. The reason why this story was so disturbing in Jesus day was because the good guy in this story, was a Samaritan, a group of people who Jews, Jesus own people, thought were less than, inferior, on a lower rung of society, they’d even go so far as to consider them unclean. These were people, if you were a Jew, like Jesus was, that you would avoid at all costs, even if that meant taking the long way around their entire region. It would be like us going to LA but having to avoid the entire central valley.

There are other ways that we walk on by people in need. An example of this comes in the form of another problem that our nation faces, that has been in the news recently. This past week we have heard of two more black men, Alton Sterling and Philando Castile, killed by police officers, the first in Louisiana and the other in Minnesota. And because of the technological age that we live in, there are cell phone videos of both that have been circulating—videos that are chilling and not for the faint of heart. I will not be showing you those videos but I warn you that they are difficult to watch if you feel the need to search for them later, and honestly I hope you do. But I would like to show you this video clip of a news conference of the family of the first victim in Louisiana. 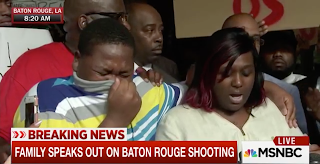 People, whole communities, who are being passed by, dying, on the side of the road. Who will we be? The first two people who keep on walking? Or the good Samaritan, the unlikely helper, who was able to look past differences, and see people in need, human beings, and do something about it? If we’re honest, sometimes we will be the first two, because we are imperfect human beings ourselves. The good news is that God will forgive us. But that doesn’t stop God from continuing to lift up the example of the Good Samaritan as our model, and that doesn't stop God from continuing to say to us, “Go and do likewise.” “Go and do likewise.” Thanks be to God. Amen.