Our Gospel reading for today really had me stumped. I had no idea what to do with it. It just wasn’t speaking to me at all. I looked at the Greek, nothing. I read it in multiple English translations, nothing. Took a look at a few study Bible notes, nothing. And just before I was about to give up on it and preach on one of the other texts, which I do from time to time, more often than most pastors anyway, but before it got to that, a professor from Luther Seminary in St. Paul MN, threw out an idea that had been staring me in the face the whole time. Thank God for people who are much smarter than I who are willing to share their wisdom!

So, continuing from where we left off last week, on his way to Jerusalem, on the road to his death, Jesus tells seventy-two of his followers to go ahead of him, into the cities and villages, ok, easy enough. He then tells them that the harvest, is bigger than we imagined. I could probably write a sermon on just that phrase alone but let’s just say that this harvest is about the restoration of God’s people, the bringing back into the fold, of all of God’ creation. And this harvest is so big, that more workers are needed, ok, simple enough. He then gives them a warning, remember, Jesus is all about laying all the cards on the table. He holds nothing back—maybe because he doesn’t want them to have any excuses when the going gets tough. 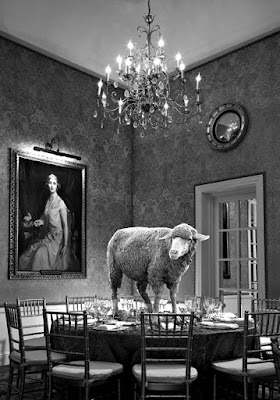 So, he gives them this warning, “Go! But be warned, I’m sending you out as lambs among wolves.” Now, how many of us, at that point in the story, would have bailed? Come on, don’t let me be the only one raising my hand! Imagine seeing an ad in the paper, “Volunteers wanted. Disclaimer: death highly likely. Please call 1-800-be a lamb.” Who’s gonna call that number? I’m not! Well, I might just out of curiosity but who’s gonna seriously call that number? Yet, this is what Jesus as asking in the story, of these seventy-two, of you and me. And if you’ve been in the church long enough, like more than a week, you know, the wolves are plentiful, and they’re not just outside the church but let’s keep moving through our story.

So, Jesus issues his disclaimer, and then gives them some very peculiar instructions. “Carry no wallet, no bag, and no sandals. Don’t even greet anyone along the way. Whenever you enter a house, first say, ‘May peace be on this house.’ Remain in this house, eating and drinking whatever they set before you. Don’t move from house to house. Whenever you enter a city and its people welcome you, eat what they set before you.” I said they were peculiar instructions. Maybe not the peace be on this house part. Jews and Muslims have been using that as a greeting in their everyday conversations for thousands of years. Unfortunately, Christians lost it somewhere along the way.

But the rest of the instructions, carry no wallet, no bag, no sandals, don’t greet anyone, eat and drink whatever they give you. Why such strange instructions? Well, I told you that Jesus is trying to teach them something about hospitality. And you may have guessed that I meant that we are sent out into the world to show hospitality. But no, it’s just the reverse here. Jesus sent out those seventy-two to receive hospitality. In fact, he sent them in such a way that they would need the hospitality of others in order to survive. Weird right? I thought we were supposed to be all about feeding and sheltering and clothing and caring for the world?

Yet, here we have Jesus sending us out to be good guests, not good hosts, good guests, to receive others hospitality. Why? Isn’t this backwards? Well, leave it to Jesus to flip the script on us right! I was talking to a good friend of mine, a retired pastor who at times is more of a mentor than a friend, and we were talking about confirmation. I asked him for his advice on leading confirmation and the first thing he said was, “Go to each of your students houses and have dinner with them, even if you have to invite yourself.” I was expecting him to recommend a curriculum, or give me a list of things they should know or do. So, his advice shocked me and I asked him to explain.

He simply said, how are you going to really know them, and be their pastor, if you don’t see them in their own environment, with their family. Spend quality time with them, he said. As I said before, thank God for smarter people than I, who are willing to share their wisdom. I think what my friend was trying to teach me was the same thing Jesus was trying to teach those seventy-two. Go spend quality time with people. Ministry isn’t always about what we can do for you. Sometimes it’s about knowing others, as intimately as we want to be known. I think deep down that’s a yearning that all of us have-to be known, by our community.

When we have good news we want to share it right, to have someone to celebrate with us? When we have bad news it’s nice to have someone to mourn with, to journey with. But I’m not just talking about our community inside these four walls. Jesus wasn’t urging those seventy-two to get to know each other. He was pushing them to get to know others, outside their safe little group. And don’t get me wrong, I’m all about serving our neighbors, after all, it’s part of our mission statement here at Bethlehem. But what about knowing our neighbors? How can we serve people we don’t know? And how are we going to get to know people unless we spend quality time with them?

Look, I can stand in this pulpit all day and preach until I’m blue in the face but these are just words. From the feedback I have been getting it seems like most of you agree with most of what you have been hearing from me. And that’s great but don’t let it end there. If you agree with what I’m saying about getting to know our neighbors, getting to know our community outside these four walls, then go and talk to the leaders of Bethlehem, Karen Stein our president, Loren Clark our vice-president, Jerry DelAgostino our treasurer, or any of our other council members, and tell them that you’re interested in helping with the mission of this church.

Why? Because you want Bethlehem to still be around in five, ten, twenty years from now. Because you want a place for your children and grandchildren to get to know Jesus and their community. Because you believe that Christ still has something for us to do here. Because in spite of the hard work, in spite of the wolves we will encounter along the way, Christ is not done here. But only say it if you really believe it. I am not an alarmist, I’m not trying to scare you. But I truly believe, with all my heart, that Bethlehem is at a critical junction in her life, that the decisions and paths we choose in the next year will be critical and they are going to take each and every one of you.

And I know that many of you are tired, and battling fatigue, and burn out. And I wish that I had words to ease that fatigue for you but I don’t. All I can say is that we don’t walk this path alone, but that we walk with the author of life, who walked a road that led to his death—but that wasn’t the end of the story! The end of the story was resurrection and new life! But it was a rough road to get there and so it will be for us too. Are we willing to take that road? Jesus has laid all his cards on the table, and says Go! Into the little corners of your world, and spend quality time with people, and tell them, how much God has done for you. Amen.