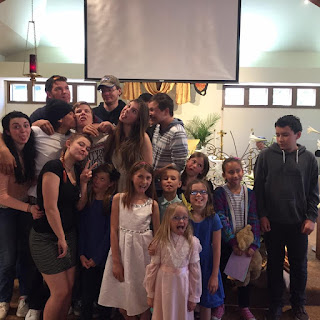 Pastor Casey, Lisa, and the youth handled the past week like seasoned ministers. They were all prepared, even though, if you asked them, it probably didn’t feel that way. But unlike naked Peter jumping out of a boat flailing about in the water trying to reach Jesus out of desperation, they were ready. And when Jesus asked them, What have you caught? They were able to say, we’ve caught another tragedy Lord. But we’ve been working on our nets, and they are strong. We are ready to follow you. Then let’s go Jesus says. Let’s go. That has been a beautiful thing to behold, in the midst of another tragedy. Thanks be to God. Amen.

Hymn: When Pain of the World Surrounds Us

The church is a holy vessel the living waters fill
to nourish all the people, God's purpose to fulfill.
May we with humble courage be open to God's will.
We are called to follow Jesus and let God's Spirit flow through us.

We praise you for our journey and your abundant grace,
your saving word that guided a struggling human race.
O God, with all creation, your future we embrace.
We are called to follow Jesus and let God's changes flow through us.